At the beginning of WWI, the Arnprior Felt Company, which was then located in Galetta, Ontario, was so successful that it was running out of space in the building they used to produce their paper-makers’ felts. At the outset of the 20th century, newspapers were the only reliable source people had for local and international news. The outbreak of war created a huge demand for news through newspapers. This, in turn, meant that demand for the felts, used to make the raw newsprint on, increased exponentially.

James Griffith (b. Lachute, QC), the manager of the felt company, made a proposition to the Arnprior Board of Trade in March of 1914 which would ultimately allow them to move their business into Arnprior, provide them with a $10,000 loan and a tax exemption. In return, they would demolish and rebuild the abandoned shirt factory on Edward Street in Arnprior, a property which the Town Council had been trying to dispose of for some time following a fire in 1907. 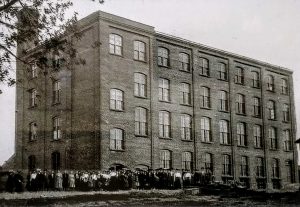 Griffith’s proposition was successful and, in August of 1914, a contract to construct a three-storey brick building by October of the same year was awarded to Stafford R. Rudd, a local contractor (Arnprior Mayor 1930-31, 1948). Thirty townspeople were hired to operate the facility. The company was incorporated at the same time under James Griffith, Mort Sullivan Jr., and J. Cunningham. 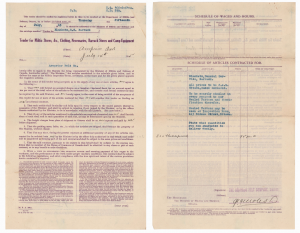 Tender from the Arnprior Felt Co. for the production of 300 blankets per week for the Department of Militia and Defense, July 14, 1915

At the outset of the war, Griffith felt his business being hampered by the government’s seizure of raw production material, specifically sheep’s wool from New Zealand, to support the war effort.

He continued to accept contracts to supply paper-makers with the necessary felts in the hope that, once the building was complete, they would be more than capable of increasing their production capacity.

Unfortunately, the Arnprior Felt Co., which had also put in tenders and received contracts to produce 1,000 blankets with the Department of Militia and Defence multiple times in 1915, were liquidated by the end of 1916. 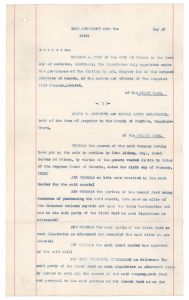 Liquidation of the Arnprior Felt Co., 1916