Following the hardships of the Great Depression and WWII, finding a ‘nice’ place to live and work was high on people’s list of priorities. For many, Arnprior proved to be that place.

Discover the great benefits of living in Arnprior by viewing one part of the “The Town and the Mill” video (captions available in both French and English). Enjoy this video with an English transcript.

Kenwood Mills hired both men and women to operate their facilities. While men were employed throughout the factory and offices, women typically worked in the office and in the splicing (joining), blanket/ felt finishing and inspecting departments. 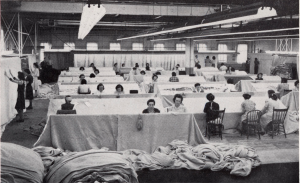 View of the Kenwood Joining Workshop

To support staff, Kenwood built a 4000 square foot employees’ wing next to the west entrance to the factory in November of 1947. This wing was accessed by separate entrances, spaces for both men and women, and provided employees a space to shower and relax while on break.

Outside of operating the factory, Kenwood offered its employees a comfortable and happy life. In the early 1930s, five homes were built for local company executives including W. W. Weed (managing director and later president of the company) and J.C. Yule (sales director). These homes still stand today on Harrington Street. While not every worker was given a house to live in, they did earn a comfortable enough wage to buy and maintain homes in the area. 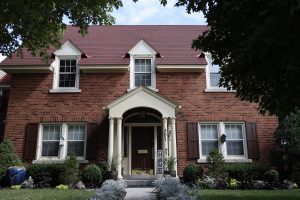 The mill also supported their employees outside of work by offering retirement plans and health benefits, and holding staff Christmas parties. These perks encouraged families to send their young people to work at Kenwood, leading to generations of families working there. 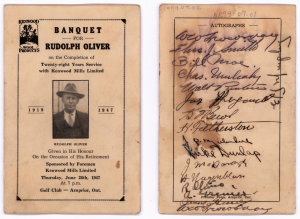 Kenwood Mills, keen to show Arnprior as an idyllic place for families, paid for the 1948 production of a technicolor film called The Town and the Mill. It was shown to potential employees and citizens of the town and was praised by the Ottawa Board of Trade as being a great way to draw people to the town.

Watch the full-length version of the video, produced by Crawley Films, to see how Kenwood Mills contributed to the desirability of Arnprior (captions available in both French and English). Enjoy this video with an English transcript.

The War Years in the “Kenwood Town” Leaders in Innovation: Paper-Makers’ Felts