Philip Dontigny (pronounced don-zhi-nee) was well-established as a textile maker in the Ottawa Valley. He ran the Dontigny and Reilly Woolen Mill, for wool and carding, with William Reilly on Main Street, Almonte, Ontario from 1872-1873.

Thanks to the Madawaska River, Arnprior had an abundance of water-powered energy; but, since its founding in 1862, the village had had no textile producers. Ready-made clothing, an off shoot of the American Civil War, c 1860, was available in shops such as Thomas J. Leitch on Madawaska Street who sold such garments.

The opportunity to build a mill in a rapidly growing community like Arnprior drew Dontigny to form a partnership with Joseph Blain and Gilbert Cannon, another mill owner from Almonte. The trio opened Cannon, Dontigny & Co., at the bottom of Burwash Street in 1874, drawing its energy from the massive and mighty Madawaska.

In 1875, the business name changed to the Arnprior Woolen Factory. Their advertised products included shanty blankets, yarns and tweeds; and their services were listed as carding, spinning, dyeing, and the finishing of clothes on request. The majority of their raw material was locally sourced through newspaper advertisements for sheep pelts and wool. 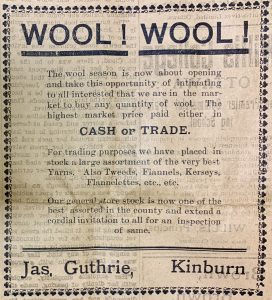 Advertisement for the Purchase of Wool

By 1879, Dontigny had left his partnership with Cannon and Blain and took ownership of the mill building.  In the same year, he reopened the mill as the Arnprior Woolen Mills together with Andrew T. Hughton.

The wooden structure, renovated in 1879, burned down in 1885 when Stafford’s Furniture Store, a business several blocks away, caught fire. The blaze spread to the woolen mill, ultimately destroying the building. The fire caused around $15,000 in loses, while the mill was insured for just $4500. By 1886, Dontigny and Hughton had built a brick four-storey structure in the same location. This new facility could produce up to 1,000 yards of material a day and so put the company in prime position to be selling their goods widely. 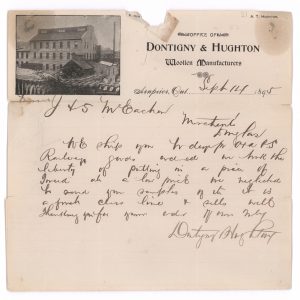 Letter from Dontigny and Hughton to J. and S. McEachen, 1895

By 1900, the mill was converted to steam power, and then electricity. Then, in 1905, Dontigny and Hughton dissolved their partnership, which lead to a 10 year long legal battle between the two.  Dontigny continued to produce blankets and textiles under the newly named Dontigny Woolen Mills, located just across the river from the ever-expanding McLachlin Brother’s lumber yards. 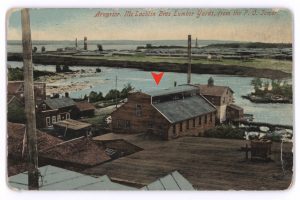 Taken from the old post office, now the Arnprior and District Museum, c 1913. The Dontigny Mill is indicated with a red arrow.

It was here that the business produced blankets under contract with the War Purchasing Committee of the Department of Militia and Defence during World War I (1914-1918).

Dontigny remained in charge until his death in 1925, at which point his son Prosper took over. Prosper kept the business running until 1929, at which time the long legacy of the name “Dontigny” as a textile manufacturer in Arnprior ended.