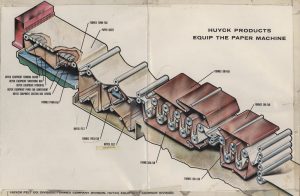 Paper-makers’ felts were the mainstay of Kenwood Mills. This process took mere fibres through the Kenwood factory building and, at the end of processing, the finished product from Arnprior was in worldwide demand. 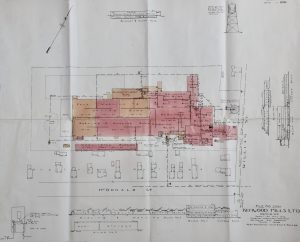 Layout of the Kenwood Mills Facility

The production process included wool from England, New Zealand, Ireland, South America, Australia, South Africa and Canada. When wool arrived at the Arnprior plant, it was graded to determine whether it was to be made into a felt or a blanket. The process for making felts and blankets was relatively similar: wool was turned into yarn and the yarn was woven into the fabric for a blanket or a felt.

Learn part of the fascinating process of turning raw wool into a finished product by viewing this segment of  The Town and the Mill (captions available in both French and English). Enjoy this video with an English transcript.

But differences in production were apparent in a few other aspects. Felts were undyed and stayed white. The huge felt pieces (measuring up to 35 feet across) would be joined to form loops and then shrunk with water to the correct size. Blankets, on the other hand, were dyed in a huge range of colours and cut down to size from a larger piece. 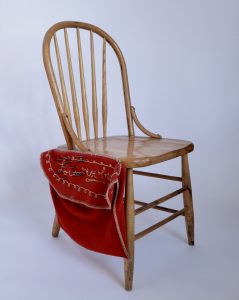 Felts coming from the Kenwood Mills were both expected and known to be high quality. The Arnprior location had a lab situated in the factory where the strength and durability of felts were tested and monitored, continually striving for better products. Many young men came to the plant’s lab untrained and were educated on site, particularly by Walter Prentice who treated employees fairly and trained them so that they would want to stay in their jobs. 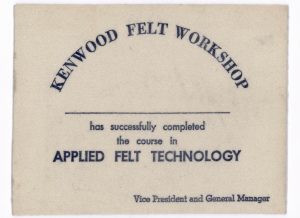 Huyck (and by extension, Kenwood Mills) was an innovator in the field. In order to educate paper-makers on their product and open up communications on how Kenwood could better improve their felts, their facilities in Arnprior, Alabama, and New York held three day workshops, with all expenses paid, where employees could learn about the felt technology before going back to their respective companies and convince them to buy Kenwood felt.

Arnprior: “A Great Place to Live” The Gift to Get: Kenwood Blankets