Heritage designation in the province extends to heritage structures worthy of commemoration and protection. There are several root cellars on the island that have been designated as heritage places.

In Harbour Breton, a root cellar constructed by Newman and Company in the c. 1800s has been designated a municipal heritage site. The root cellar, now in ruins, was a two storey building established on Newman and Company’s plantation. It was partially dug into a hillside; the lower storey was used as a root cellar to store vegetables grown to supply the company’s employees, while the upper storey was used to house livestock. Originally, the cellar had four rock walls about 1.8 metres high and rock flooring, while the upper storey had low wooden walls and a peaked roof of tarred wooden shingles.

This cellar has significant historical value. Newman and Company were one of the largest English West Country merchant firms to operate in Newfoundland during the nineteenth century. The company was in active business with fishermen on the south coast and operated a successful import and export business out of Harbour Breton for over a century (c. 1790-1907). Part of this business was supplying vegetables and other foodstuffs which required them to expand their gardens at the plantation in Harbour Breton to meet this demand. Records indicate that the company was growing potatoes, wheat, and even tobacco.

When Newman and Company abandoned their operations in Harbour Breton, Coady’s Limited used the cellar and replaced the upper storey’s wooden walls and shingles with a sod earth covering before they too abandoned the area in the early 1950s. 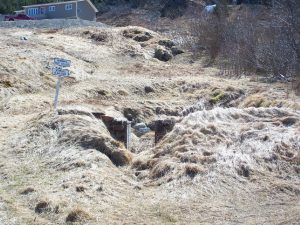 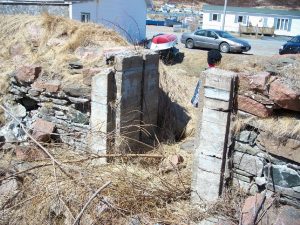 Interior view of the entrance of the Newman and Company cellar ruins, date unknown. 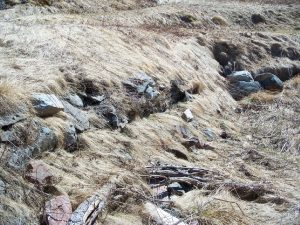 In the community of Elliston, Tom Porter’s root cellar has been designated as a municipal heritage site. Porter’s cellar, built in 1879, is a hillside type cellar with a reinforced rock facade and wooden door on the exterior. There is a lot of historic and cultural value within this cellar too; not only does it have wooden beams salvaged from The Eric, an 1878 shipwreck nearby Maberly, it is also located in the area of earliest settlement in the Ellison vicinity. 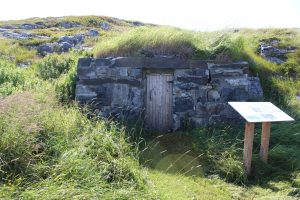 George Pearce’s root cellar, also referred to as Rex Chaulk’s cellar, is a designated municipal heritage site located in Elliston. Built by George Pearce in 1859, the hillside cellar features some exterior rock facade and a wooden door, however most of the cellar is covered by thick sod and earth. 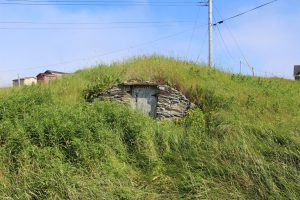