The most common types of root cellars were traditionally constructed using dry-stacked rocks with some kind of beam system to support a roof. 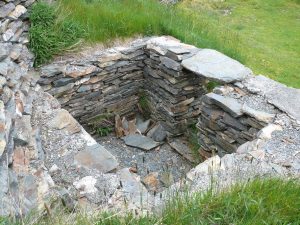 ​​You dig out a hole, find the rocks, not too heavy but flat rocks . . . grandfather got his up where the funeral parlour is. Just past that, there’s a road that went in there. He got his off of the hill there. He had a small chisel with a blade and a wire, he used to have a wire twisted on it about this long. He’d put it on the rock and hit it with the hammer and split the rock to the size he wanted. He was pretty good at that stuff. [Then] you get the horse and cart – horse and box cart or whatever – and bring it back and stack them up. You had to do that in the proper way too. You put one here, one here, and the next one went over the two.

Roofing members were often made of wood, which required maintenance or replacement as rot set in. Design and construction were dependent on available materials. As a result, every root cellar is unique in its design and construction. It was common for builders to salvage and repurpose old materials, everything from plastic or metal siding to old railway ties, guard rails, and even telephone wires! 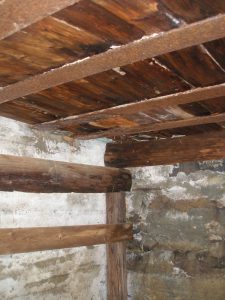 Iron railroad tracks incorporated into the construction of this root cellar in Harbour Grace, August 2011. 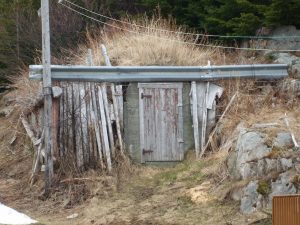 Salvaged materials used to construct a root cellar in Twillingate, 2008.

When it became available, concrete or cement could be used to create or upgrade cellars. In Twillingate, concrete cellars were most prevalent, replacing stone and wood as the primary building materials in the area by the 1930s. 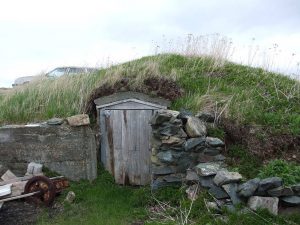 Heritage in the Ground: The Archaeology of Newfoundland’s Root Cellars Cellars, Step by Step