Before the introduction of electricity and modern refrigeration techniques, using a root cellar provided families with foods preserved throughout the long winter months. 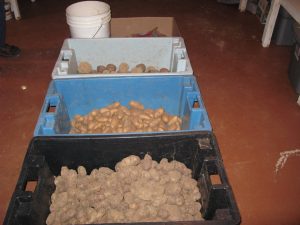 It was not uncommon for families to have stocked cellars of vegetables and canned or bottled goods. These methods of preservation were good for storing non-root vegetables and berries to prevent them from going soft and to keep meats safe to consume well into the winter months. Additionally, meats such as chicken, moose, rabbit and salmon were bottled, dried and smoked, pickled in salt brine, or hung from the cellar rafters.

Herber Parsons talks about his family root cellar and how they prepared their cellar to keep vegetables over the winter. Enjoy this audio clip with an English transcript. 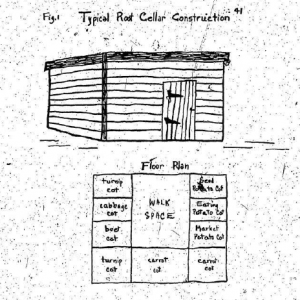 Newfoundland and Labrador’s climate and soil have not been conducive to agriculture, but outport isolation and poor incomes in the fishery have made supplementary farming crucial.

Growing enough vegetables to last the winter was imperative to the survival of Newfoundlanders in the past. Without refrigerators, root cellars were one of the few methods to preserve their bounty. Most people grew root vegetables: potatoes, carrots, turnip, cabbage, and beets, while others grew a wider variety of vegetables in their gardens. According to Boyd Whalen of Western Bay, “everyone had a root cellar. Everybody. Couldn’t live without one. If you did, you were very, very poor.”

Other Cellar Types Elliston: The Root Cellar Capital of the World