Above ground cellars are freestanding structures covered with an earth mound and thick sod on the exterior. The cellar foundation and interior is lined with rocks or concrete.

Entry to these cellars is through a ground level door on the front, with some having a double door entry, creating a porch area that serves as a barrier to keep the frost out of the cellar interior.  An example is the Spence Root Cellar, located in Brigus. 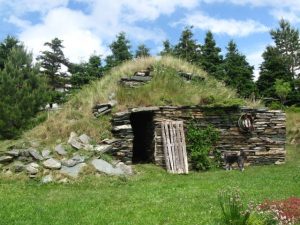 The Spence Root Cellar is owned by Marcia Spence and is believed to have been constructed in the mid-1800s by Sandy Roberts and was in use to store vegetables until the 1960s. The cellar is of stacked rock construction. Originally, it had the traditional double door entry. Unfortunately, the cellar has collapsed inside.

This John and Phonse Ducey root cellar is located on the eastern outskirts of Keels, Bonavista Bay, and was documented by folklorist Kristin Catherwood in 2013. The cellar was built in the early 1950s by Henry Thomas Curtis, a carpenter from the nearby community of King’s Cove for Kenneth Mesh. 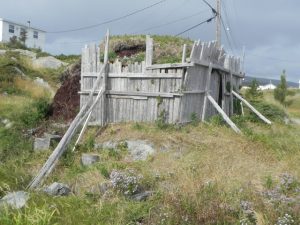 The bulk of the work done by Curtis consisted of pouring the concrete for the interior structure. Roland Mesh, Kenneth’s brother, recalls that the concrete was poured first and then left to set for several months. In the meantime, a wooden exterior structure was constructed of spruce split logs.  A gap of five feet was left between the cement interior cellar structure and the exterior wooden structure. This space was then filled with turf.

Much of the turf was brought from Pigeon Island in Keels Harbour, since turf was in short supply in the community. The turf was dug by hand and loaded in small boats, brought to Keels, and then was hauled in wheelbarrows up to the building site. There, it was shoveled into the five foot space between the cement inner structure and wooden outer structure, as well as onto the roof to act as insulation.

Some degradation over time allows you to see the construction process. The diagonal side braces, acting as a type of buttress, helped keep the outer walls up against the weight of the sod. It is a feature you will sometimes see in old fishing stages called a “side span” — a wooden exterior brace on the side of a stage which kept the side of the stage from breaking out when a large amount of salted fish was stored inside.