Cupids, the first English settlement in what is now Canada, is the home of the first known colonial cellar in Newfoundland and Labrador.

Established in 1610, the Cupids Cove Plantation was the first official English settlement on the island of Newfoundland and in what is now known as Canada. Governed by John Guy, the colony started out with a small population of just a few Englishmen. When English settlers arrived in 1610, they began to clear the land for their settlement and began the construction of structures to live in. Within the first few years of the settlement, several structures had been built.

One of the first projects they undertook in building their colony was to dig a cellar which they used to store vegetables, foods, and other supplies. Within the first few years of settlement, the colonists at Cupids had cleared the land and were growing crops of lettuce, turnips, peas, and many other vegetables.

Archaeological excavations at Cupid’s revealed the entire stone-walled cellar structure whose interior measures 2.10 metres by 2.81 metres and is approximately 7 feet deep, all constructed using local stone. Many artifacts recovered, such as North Italian sgraffito and Werra slipware, suggest that the cellar was indeed built shortly after arrival. 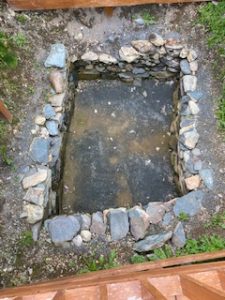 Erected above the seven foot stone-walled cellar was a wooden building containing a large fireplace made of imported brick from England, and cobblestone floors, all indicating that whoever had built these structures was anticipating a long stay at the colony.

The dwelling house and other buildings were destroyed by fire in the 1660s. After the fire, the exposed cellar pit became a convenient place to dump refuse.

Another early example of a stone cellar comes from the 1621 English settlement in Ferryland, established by Sir George Calvert, the First Lord Baltimore, under the leadership of Edward Wynne and a small number of Englishmen. Letters dated soon after their arrival indicate that a forge, a cellar, and many other stone dwellings were built, including Calvert’s large home, The Mansion House. Archaeological investigation revealed the Mansion House along with a large 6.1 metre cellar beneath it. It is believed that part of the cellar was incorporated into part of the colony’s defensive wall at the eastern rampart. Excavations of the rampart revealed a deep cobble stone lined pit which is believed to have been part of the cellar.

Several cellars have subsequently been located at Ferryland dating throughout the early and later occupations of the area. Archaeological work uncovered a late eighteenth century cellar near the Mansion House that had collapsed and filled with rubble. 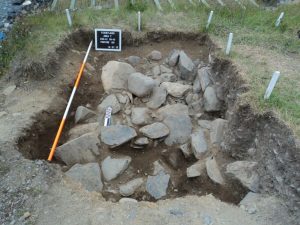 While the Cupids and Ferryland examples were not root cellars in the modern sense, they set the stage for the various types of historical root cellars that were to follow.