Hillside cellars are dug out of natural hillsides. The walls of the excavation are lined with rocks or concrete and the cellar ceiling is reinforced with overhead beams. The entrance for this design is located at the front of the cellar through a ground-level door. 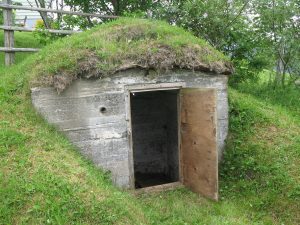 Pat Griffiths built this cellar circa 1950. It is built into a hillside, with three sides covered in earth and a sod roof. It is approximately 2 metres by 2 metres and is made fully out of concrete including the ceiling. The interior of the cellar was originally used to store vegetables, however after considerable flooding from a nearby brook it was turned into a well. In 2011, it was no longer used as a cellar but was occasionally used for retrieving water.