In Newfoundland and Labrador, root cellars are more than just places to store vegetables. Root cellars were places where children played games, and they served as the source of many stories, from fairy legends to tall tales.

Every root cellar has different memories associated with it from its users. Tracy Crocker, a descendant of the original builders of the Crocker Root Cellar in Bradley’s Cove, told the story of Dexter the horse and how he liked to test the strength of the family root cellar.

When I was a kid we had a cellar out in our garden. So my grandmother’s always paranoid that when you walk in the cellar, make it quick. So when you walked in – that’s the cellar that’s by her house now – so when you walked in across that wooden floor, you had to get down, you had to get what you got, then you came up and you were out. So she was always paranoid about that falling in, so same with the cellar in Bradley’s Cove, she’d always tell us. We always had this horse, Dexter, because it was used back then for drying wood and all this kind of stuff for the winter, and his favorite spot was on top of the cellar. She said she’d be in the kitchen, and she’d look out the window, and it’s like here he is, stood tall. You’d get out, and drive him away. You’d think he’d be gone far enough distance away from it and you’d come in, do your odds and ends or whatever you had to do, turn out the window, [and he’s] on the cellar again. So if he wasn’t going to cave it in back then, it’s still there now.

In recent years, the Crocker Root Cellar has been used as a place for people to gather and drink and it was also the location where stolen loot was stashed after a reported break-in! 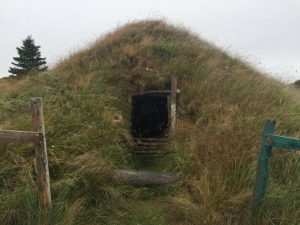 Newfoundland folk stories relating to root cellars are quite common. Elliston boasts several, including legends about a legendary strongman and about the origin of babies.

Storytellers in Elliston claim that some of the large porch stones and lintels used in the construction of root cellar doorways were placed there by the legendary strongman, Jimmy Chant (1886-1924). He was a huge man, “built like a motorboat and great arms, all upper body body strength,” says Don Johnson of Elliston Tourism:

Jimmy was a strong man. He had big hands. He was quiet and had a strong deep voice… He used to take a boat up in under his arm and carry it to dry land… Jimmy carried a Waterloo stove from Bonavista to Elliston, and on his way down he had to turn around and go back to Bonavista because he forgot something.

Many stories circulate about Jimmy and his legendary strength; he could bend nails into staples with his bare hands and he is reported to have carried a bundle of shoe leather weighing several hundred pounds on his back from Bonavista to Elliston!

The Memory Store: Huge, built like a motorboat… (captions available in both French and English). Enjoy this video with an English transcript.

Where do Babies REALLY Come From?

The Memory Store: Babies came from here but you dug them with a silver shovel… (captions available in both French and English). Enjoy this video with an English transcript.

Not all local lore was so light-hearted. As portals to the underground, root cellars were home to some darker stories. Adults would sometimes threaten to lock up disobedient children inside the root cellar if they were bad, or, alternately, create terrifying stories about the cellar’s mysterious inhabitants to keep children in line.

“Don’t go down there — the boo-darbies are down there!” folklorist John Widdowson was told of root cellars in the community of Avondale. The good folks of Grand Falls took things one step further:

A story was told me by a lady who in about 1890 was frightened by the family maid who threatened that if anyone went into the cellar where the food was kept…. a boogie-man would get them. This maid even went to the trouble of dressing up as a boogie-man in order to frighten the children. She was very successful, for the children were terrified to go near the cellar.

Widdowson found other similar stories in his research. Parents in Freshwater, Carbonear told children there was a policeman hidden in the cellar to take them away if they were bad.

“Be good or I’ll put you in the cellar where the rats and the insects will eat you up,” parents in Buchans warned. And in the community of Aguathuna on the Port-au-Port Peninsula, children had to be careful of goblins:

I was absolutely terrified of Goblins; they used to live in dark places, especially the cellar. The Goblins would come and attack children at night if they weren’t good. They weren’t human and didn’t have any particular body form; they seemed to be a sort of black cloud that would snap you up unaware. My grandmother would always be telling us stories of little boys and girls whom the Goblin had taken because they weren’t good.