The town of Elliston, located at the tip of the Bonavista Peninsula, is best known for its identification as “The Root Cellar Capital of the World” due to the several hundred root cellars located in the town. One of the oldest root cellars in the town, built in 1839, is still in use today!

Hilda Chaulk Murray, a resident of Maberly, Elliston, recalls that when she grew up, the community of Maberly had one hundred residents and a total of eighteen households, all of which used a root cellar. Root cellars here were used to store a variety of vegetables grown in their gardens to use throughout the winter and in the summer months they would use their cellars to chill milk, butter, bread, and even homemade beer.

Rex Chaulk remembers growing up in Elliston with a root cellar:

I used to help Father when I was big enough… He’d be at the potatoes in the summer, trenching them – that’s when you form the beds – then putting on caplin [for fertilizer].

His family picked ripe blueberries in September and stored them in a keg in their cellar which was opened during the Christmas season to reveal homemade blueberry wine. As Rex grew older he came into possession of the family root cellar which he used to store upwards of eighty 75-pound sacks of potatoes along with many other vegetables and foodstuffs to feed his wife Edith and their fifteen children. Now, much older, Rex still grows his own potatoes and uses his root cellar to store them. The root cellar belonging to Rex Chaulk is one of the oldest ones in Elliston and was restored with a new wooden ceiling by the town.

Restoration of Newfoundland Root Cellars, Elliston (captions available in both French and English). Enjoy this video with an English transcript. 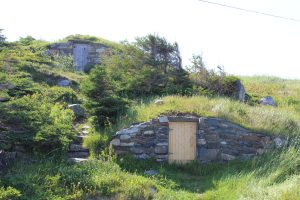 Due to the large quantity of root cellars in Elliston, many of them have acquired heritage designation for their historical, cultural, and aesthetic values. The “Twin Cellars” or “Upstairs-Downstairs Cellars” in Elliston, otherwise known as Jim Goodland Upstairs root cellar and Dan Goodland Downstairs root cellar, are both municipal heritage sites. The Goodland brothers built these hillside cellars in 1915, both cellars have a wooden door and rock facade exterior surrounded by the natural hillside landscape and sod. Both cellars were used to store vegetables and other food items before modern refrigeration technologies were introduced, and both cellars are still in use today.

The Memory Store: The root cellar capital of the world… (captions available in both French and English). Enjoy this video with an English transcript.