A root cellar is an underground or partially underground structure used to preserve vegetables and protect them from frost through the winter. Root cellars are often constructed into hillsides and make use of the existing geography. Generally, they are constructed by digging a hole in the earth and reinforcing with wood, rock, cement, and/or other material before covering with sod, leaving a small door for access. Ideally, the earth surrounding the root cellar will be no less than fifty centimetres (approximately two feet) thick, which is necessary to achieve proper temperature and humidity levels suitable for preservation of the cellar’s consumable contents. Dan Rubin, resident of Pouch Cove and owner of Perfectly Perennial says:

Root cellars are holes in the ground that use the surrounding earth to keep stored food from freezing. We found more than twenty root cellars in [Pouch Cove], each one built in a unique way. But most of them are no longer in use. Without local agriculture, people no longer see them as necessary, so they are often neglected or removed.

Root cellars are commonly constructed in the landscape between the fields where the crops are grown, and the house where the crops will eventually be prepared and consumed. 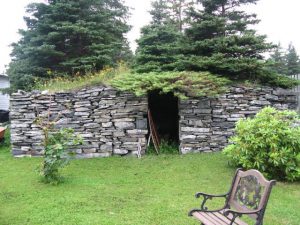 Andrew Boland tells us what a root cellar is. Enjoy this audio clip with an English transcript.

When used for the storage of vegetables, the interior of the cellar was commonly divided into wooden compartments called pounds. These were located either directly on the ground, on raised wood, or in bins, keeping separate varieties of vegetables, such as potatoes and turnip, in separate sections. Carrots and parsnips were often kept in bins or buckets filled with sand or sawdust which kept them moist and firm. Cabbage was kept up high and often described as being hung from above. During the summer months, root cellars were also used to store jams, jellies, milk, and other perishable items to keep them cool. Typically, a root cellar is accessed every week or two to bring in vegetables to the house. 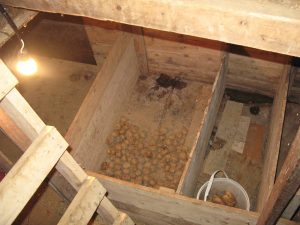 Ross Traverse tells us how root cellars are used to preserve foods. Enjoy this audio clip with an English transcript.

The Roots of the North American Root Cellar