Jackman worked on the Cariboo Road for much of 1862 and 1863, but was in New Westminster long enough to meet his future wife, Sarah Ann Lovegrove.

Sarah was born December 16, 1839 in Middlesex, England to parents John and Mary. Sarah was admitted to the St. Pancras Workhouse at the age of 22 in November 1861 and worked as a servant. Workhouses provided basic accommodation and employment but were not ideal places to live as they were overcrowded and riddled with illness.

Sarah Jackman with her Great Grandchildren Laurie and Bessie Switzer, 1917 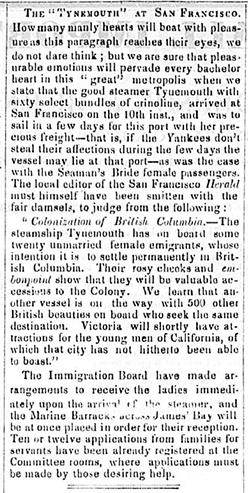 The “Tynemouth” at San Francisco

Unhappy with workhouse life, Sarah sailed on the Tynemouth “bride-ship” which departed for British Columbia by way of Cape Horn on June 9, 1862. Sarah was one of the 40 female passengers sponsored by the Columbia Mission Society. There were 280 additional passengers onboard, including 20 women sponsored by the Female Middle Class Emigration Society. The sponsored women were isolated from the rest of the passengers and guarded by chaperones. The chaperones felt that they needed to protect the ladies from the attentions of the crew by confining them below deck for most of the 99 day voyage. The young women were confined to the ship for all thirteen days at port at the Falkland Islands and at the second stop in San Francisco. Officers and crew sympathized and brought the confined women soap, milk, eggs, and oranges.

Conditions aboard the Tynemouth for these women were undesirable, with cramped, ill-lit accommodations, and poor food. The women prepared their rations themselves and washed plates, cutlery, and cooking utensils in buckets of cold seawater. Clothing washed in seawater became crusty with salt and never fully dried, and many people gave up washing altogether.

The voyage of the Tynemouth

Royal Engineer Philip Jackman The Arrival of the Tynemouth