On December 7, 1941, Japan bombed Pearl Harbour in Honolulu, Hawaii. The same day, Canada declared war against Japan. The bombing was a tipping point, allowing the government to pass discriminatory laws. These laws are defined as ethnic cleansing by today’s standards.

False rumours that Japanese Canadians were enemy spies caused a cry for retaliation. Politicians in B.C. lobbied Ottawa to remove Japanese Canadians from the B.C. coast. Yet, the Royal Canadian Mounted Police and military leaders said they did not pose a security threat. The federal government yielded to pressure from B.C. politicians.

No Japanese Canadian person was ever charged or convicted of espionage or sabotage during WWII.

Action from the government was swift. Most had only 24 hours to sell businesses and possessions. Only allowed to take one suitcase, they had to leave most personal possessions behind.

The government confiscated fishing boats owned by Japanese Canadian fishers. Some fishers were still on their boats when the navy towed them to the Fraser River delta. For some, this was a long way from home where their worried families waited for them.

Diaspora: A group of people who have been dispersed from their homeland, usually by force. 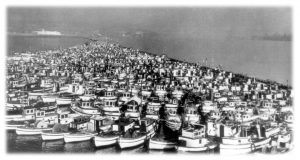 Men between the ages of 18-45 were removed from a 100-mile radius of the coast, called the “coastal security zone.” Eventually, families were also removed from this zone.

Japanese Canadians were shipped to Hastings Park in Vancouver. Housed in livestock barns and other buildings, each family had a horse stall with limited privacy and poor sanitation. The food was of poor quality and culturally foreign, resulting in sickness and malnutrition. Those who fell ill, children included, were quarantined in a dank basement

They took me to a stall, a stall for animals, and there was this young mother. She couldn’t understand English… She was crying and crying; she was beside herself, in a panic. They had taken her kids from her… It was like she was all alone in the world. 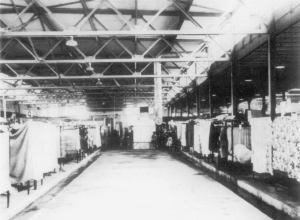 Stalls for women and children in Tashme

Those who wanted to keep their family together had to work in the prairie provinces. Many worked on sugar beet farms in Alberta. Others were forced to go farther, ending up in Ontario.

Japanese Canadians in British Columbia A Lot to Lose