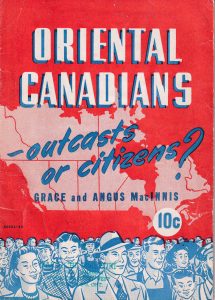 Toronto politicians reacted by enacting a ban on Japanese Canadians. Sometimes help came from the unlikeliest of places. Ernest Trueman, the placement officer for the “Japanese Division of the Federal Department of Labour,” proved sympathetic. He turned a “blind eye” whenever possible. When asked, Mr. Trueman would toe the official line – “No Japanese Allowed in Toronto.” But if a Japanese Canadian person or family settled in Toronto without drawing attention to themselves, he looked the other way. 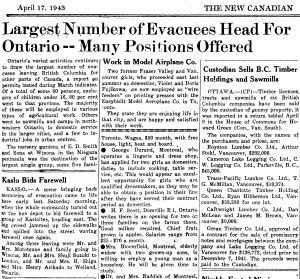 Many families searched for sanctuary elsewhere. These settled throughout Southern Ontario, including the Niagara Region. The arrival of Japanese Canadians in Niagara during and after the war aroused various reactions amongst the locals. Along with an initial curiosity, there was also anxiety and hostility.

Some politicians tried to stir up fear of “foreigners.” Yet, 75% of Japanese Canadians arriving in Ontario were Canadian-born or naturalized citizens.

Fear and curiosity often came in the form of mixed messages. A front-page story ran in The Beamsville Express titled “Japs arrive in Beamsville” on September 23, 1942.

Such protests were not limited to Beamsville. In reaction to Japanese Canadians at the Tregunno farm in St. Catharines, two stories headlined in The St. Catharines Standard in 1945: “Presence of Japanese is Resented” and “Protest Japanese in the Area.”

The ratepayers in the township are going to put them out bodily if they are not removed.

– Cecil Secord, the Reeve of Grantham Township and Warden of Lincoln County, 1945.

Listen to this CBC audio archive: Kinzie Tanaka: I’m proud to be a Canadian

“Kinzie Tanaka: I’m proud to be a Canadian”

Kinzie Tanaka: The peace that has come to the world with the surrender of Japan will be joyously greeted with thanksgiving by the Japanese Canadians here in Canada, along with all the democratic peoples of the world.

Ever since the Japanese war machine invaded China, we Japanese Canadians have lived under the shadow of her guilt, even though we had no part in her crimes. It is our earnest hope that out of the chaos and destruction that has torn the East, there will arise in Japan a strong, democratic voice that will lead her people along the paths of peace, so that one day she, too, will have earned the right to be a signatory of the United Nations Charter.

I am a Japanese Canadian and have lived here in Canada for twenty-nine years, and my mother has lived here for forty years. On that fateful December day when Japanese bombs fell on Pearl Harbour, each of us felt the explosions. From then on we knew that our lives would be uncertain.

Our forebodings were justified, for the government of Canada soon ordered the evacuation of all people of Japanese ancestry from the British Columbia coastal area. Our home and property was expropriated and sold, and our family was separated. Our cars, radios, and cameras were confiscated.

Being born in Canada was no protection – all were treated alike. All were treated as enemy aliens. The shadow of the Japanese militarists was cast upon us; we were under suspicion. The culture and education we received in the Canadian schools could not help us. The lifelong Canadian friends we had made could not help us. From then on we knew we had to prove ourselves, that we are Canadians, just as much as any other minority group; and that one’s racial ancestry does not necessarily determine one’s loyalty.

It is gratifying to know that not one act of sabotage has been committed by our people in Canada. On the whole, all government orders have been abided by, and we have cooperated in the resettlement program. Many restrictions are still imposed upon us.

The education we have received in the Canadian schools has not left us, nor the ideals for a democratic Canada. And it is to this end we have organized, so that our people will make a contribution to the development of our national life along with those from other lands.

Our boys have consistently tried to enlist in the armed forces ever since the start of the war. But they have been denied this right. It was not until a few months ago when the nation’s efforts were turned to the Pacific, that the Canadian Army required our services. Our lads enlisted without hesitation, and now you will find them serving under Lord Mountbatten in India and Burma. And others are training here in Canada.

When the government moved us from the B.C. coastal area, we were told it was for military, precautionary measures. When we moved to the east we found jobs in war plants and essential industries, turning out materials for the Allied war effort. Race baiters and race haters would find small solace in the way we have conducted ourselves during this difficult period.

There are these elements in Canada as elsewhere, who for selfish reasons would sacrifice the unity of this country and the ideals that men have died for. In the words of the Prime Minister, ‘The hateful doctrine of racialism, which is the basis of the Nazi system everywhere, must not be permitted in Canada.’

We Japanese Canadians welcome these words, for they give us hope for the future. I have friends in Canada among Chinese, Jewish, Negro, Ukrainian, and many other nationalities. They are all Canadians, just as we are Canadians. They all want to be recognized as an integral part of this dominion, and so do we.

If the terrible sacrifices that have finally brought peace to this world are to mean anything at all, then the essential provisions of the world charter respecting race, sex, language, or religion, must be adhered to, and a man must be judged by his merits alone, and not by the actions of people in the country from which his fathers came.