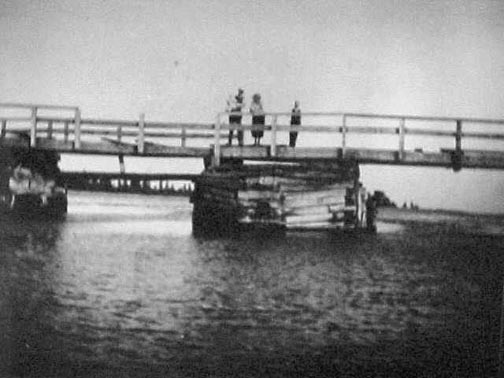 Margaret Kuhn Campbell is a daughter of Peter McNab Kuhn, seventh and last owner of the Cole Harbour dyke. Margaret Kuhn Campbell wrote a book called “A Tale of Two Dykes,” which was published in 1979. I will be doing a reading from this book, approximately pages 50-53. I have adapted and changed her words a bit for this reading. My name is Cindy Campbell-Stone (no relation), and I am very honoured to be reading the words of Margaret Kuhn Campbell.

My father Peter McNab Kuhn intended to raise beef cattle on the marshes. The various species of grass would furnish food to grow cattle if not to fatten them. The upland farm with its small grazing areas was supplementary. Beef that is raised lean and then fattened is good beef, young tissue and tender, so say my informants. Peter’s career for the next twenty-six years was in this pursuit. It was never lucrative. Money was used for the necessities, with a few luxuries, but by supreme dedication and hard work on part of both parents, the family were raised in good health.

As the owner of the dyke, Peter faced two challenges of special weight in a career which was constant challenge. One was the need to improve the sluice gates, or aboiteau, so as to create better drainage from the harbour. He, being of inventive mind, had a plan for that, which was carried out.

My brother, well, he states from memory that the eight foot wide gates, hung in the centre of the twelve foot openings with rigid partitions two feet wide on either side, had become to over, well, waterlogged, and heavy, as to have lost their buoyancy and ability to float on the out-going tide. They had also been faced with large copper plates as ballast, to make them sink on the incoming flood. Peter took out the partitions, omitted the copper plates, and closed the whole width of each opening with a set of two gates, each six feet wide. The new system was better, and he was rewarded for his great effort. As brother Wilfrid puts it: “He took the copper plates away and made larger gates, and that took the water out.”

The other challenge was a gauntlet thrown to my father every spring by the forces of nature in their damage to the aboiteau. The frenzy of winter storms and the ice flows of the spring thaw pounding at the gates and their supporting woodwork always wrought some damage to the structure, sometimes with almost catastrophic injury. Gates would be torn off, buttress cribs injured. Once the eastern dyke was breached and cost three weeks of determined effort for its repair. The gates could usually be retrieved from the shore outside the harbour; they would be repaired and replace. The cribs might need new planks and new rocks for fill. This work had to be done in early spring when the water was icy cold, and sometimes the emergency demanded that the worker wade in to reach his vantage point. My father must have reserved this duty for himself, as I have been told that he was seen standing up to his waist in the icy water.

The men of the household, which means father and two sons, even when the boys were at a very tender age, would have to drive in the heavy farm wagon eight slow miles by the West Lawrencetown road to the aboiteau, work all day according to the tide-governed opportunity, and return at night, often arriving late in the evening, only to leave early the next morning for another hard day. Whatever the immediate demands were in order to keep ahead of the destructive forces of wind and waves – these must be met by the human strength available.

Occasionally, neighbours, the smaller marsh plot owners, helped with the repairs to the dyke, but they were impressed with the boys’ work. One of the tasks assigned to the boys to collect rocks to replace those lost when crib-work was damaged. They were proud when some of the men workers, observing the huge rocks which they brought and eyeing their puny strength, asked in amazement, “How did you lift them?” The boys’ secret- their clever secret – well, they made a ramp of heavy planks to roll the rocks onto the wagon.

You know, I was a little girl then, and I was never aware of the extremity of the hardships undergone by my father and brothers, well, until swept by the discovery in a conversation recently with my one remaining brother, who is now living in Florida year round.

The scene is the cabana of his mobile home in Fort Lauderdale, with beautiful lawns and shrubs all around, and his own bananas, oranges, and papayas hanging from the trees. A great Chinese tulip laden with blossoms reaching its branches toward the sky and scattering pink petals on roof and lawn. Beautiful, indeed.

But you know, the reminiscing has been proving, well, probing, yeah, and evocative, the emotional strain greater than perhaps either realizes. Wilfrid recalls something almost unbelievable to me.

“We worked all day, drove the long road home, and reached there at ten o’clock at night. We went to bed…and then…then we had to get up again at four o’clock in the morning…to start…”

Unable to finish, he stands up and walks away, struggling to control an emotion which embarrasses him. No hint of bitterness is in these words, only sorrow for the little boy who used to be, and acceptance of the exigencies of the day. In retrospect, I envision our mother, obliged to waken her young sons at such an unearthly hour and send them off to another of the long unchildish experiences. All possible comforts of food and warm clothing she would, of course, provide, but she was powerless to combat such hardship for her boys, Wilfrid, possibly eight years old, and Max, the eldest of the family, at thirteen.

The long struggle ended, perhaps mercifully, with an act of violence, so rare in thar long ago peaceful rural era, the “bombing,” as it might be called, of the aboiteau, in 1917. But that is a story for another time.

(Image: The aboiteau over Cole Harbour, showing the width of the gates. Unidentified people are leaning over the railing.)