By 1914, the success of Ontario No. 1 was firmly established. Another vessel was ordered. 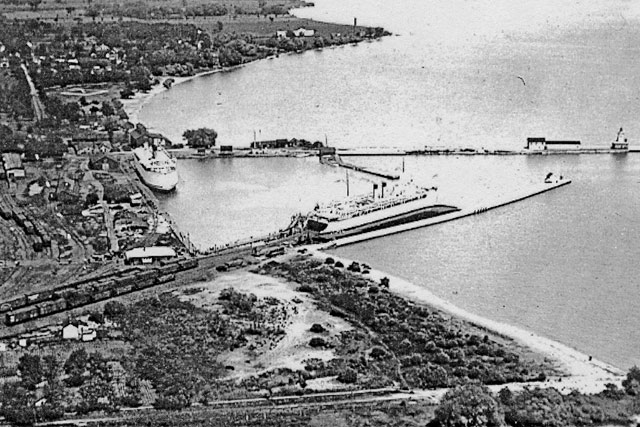 Both ferries in Cobourg harbour.

Ontario No. 2, almost identical in most respects to her sister, was built by Polson Iron Works Ltd. of Toronto and was launched on April 3, 1915. 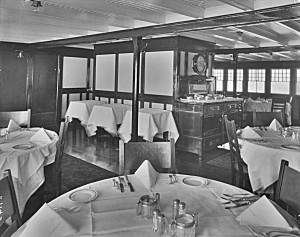 The passengers’ dining area aboard Ontario No. 1.

Visitors from the United States, who established Cobourg’s American Summer Colony, were a significant part of the ferries’ business.  The 1910s and 20s were the most successful for the ferries. They carried 70,000 passengers per season during this time.  In 1925 they loaded and ferried 12,863 coal cars. 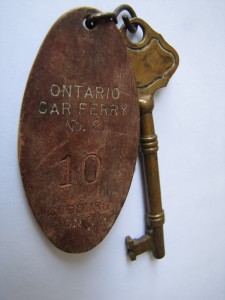 However, with the Great Depression, hard times hit. Still, there remained enough commercial traffic, supplemented by excursion rentals, to keep both ferries running.

But by the mid-1940s losses were being experienced. Ontario No. 1’s last trip out of Charlotte was on July 31, 1949 – her certificate expired and she had to be dry docked. On April 30, 1950, Ontario No. 2 blew her whistle and left the American dock for the last time. The Ontario Car Ferry Company’s service ended when Ontario No. 2 docked at Cobourg and the steam was let down for the last time.

View this video with a transcript: “Phil’s Story”.