During the latter half of the 1950s many changes came about which transformed the role of the applebox belles. Packinghouses became more mechanized and the belles’ skill and dexterity was no longer required. The belles’ roles of sorter, skilled packer, and stamper faded. 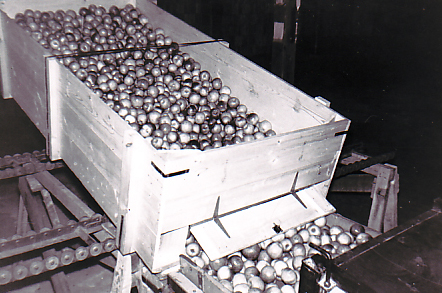 The first bulk bin in the Okanagan, 1957

In 1957, Gordon Shaw of Winfield developed the bulk bin. These new bins each held the equivalent of twenty five apple boxes and streamlined transport from the orchards to the packinghouse. Shortly after, an innovative new bin dumper was developed: a large steel tank filled with water. Apples floated through the tank pushed by water from a pump. Bruising was almost completely eliminated. Much of the sorting was now done automatically. The days of eight to fifteen women on the sorting line had come to an end. 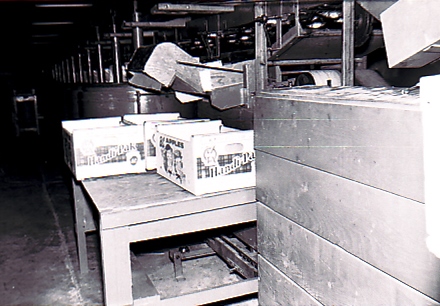 The most important change was the tray pack which is still used today. The complete apple box was stamped out of a single sheet of heavy duty cardboard and shipped flat to the packinghouse. A worker folded the bottom flaps of the cardboard box, added four staples and the box was ready. A molded cardboard tray was placed in the bottom of the box, an apple placed into each indentation, and again in layers until the forty pound box was filled. The invention of the tray pack diminished the role of the champion packers such as Bernice Gunn. Packing competitions ended.