Ikue Kitagawara was nineteen years old and searching for a different life. Born in 1898 in Nagano-ken, Japan, Ikue had finished her schooling and, like many of her friends, dreamed often of emigrating to a new country and new adventures. When she heard of a young man who had returned from Canada to seek a wife, she thought “I’ll go!”

She married Kizo Kobayashi and returned with him to Okanagan Centre. Her new life held many challenges. Both Ikue and her new husband began work immediately for the Okanagan Valley Land Company, where Ikue worked as a camp cook and began to learn English. After several years the couple purchased twenty acres of land which they cleared after work each day. They planted an orchard, built a small home, and raised six children.

When her children were old enough to be left alone, Ikue returned to work for the Okanagan Valley Land Company, this time in the packinghouse where she worked as a sorter. 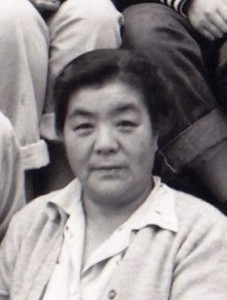 The shy, adventurous young woman of Nagano-ken worked as an applebox belle for more than twenty years, and her modesty and work ethic made her many friends.

“Mom was really strong in her way. When she arrived, she had to learn everything, and she worked hard at it.” (Mieko Kobayashi Kawano, July 25th, 2011)