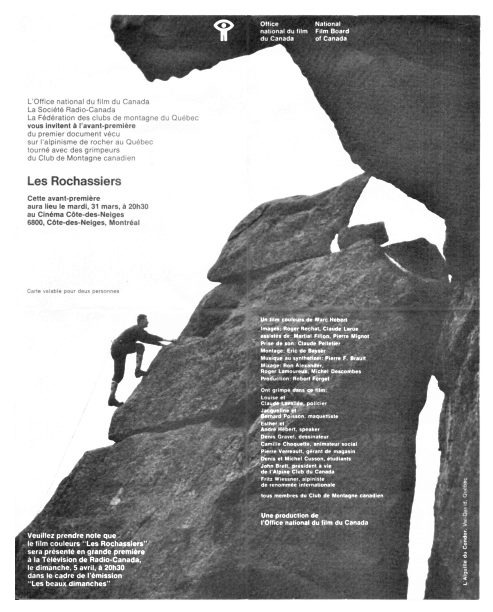 Above is a promotional poster for the preview of the film. It was a splendid advertisement for rock climbing in Québec and Val-David.

Marc Hébert from the National Film Board of Canada (NFBC) directed Les Rochassiers, a documentary on rock climbing in the Laurentians.

In addition, Les Rochassiers displays an indisputable richness by means of the genres it deploys, and by which it is more or less directly inspired. A study of the soundtrack and the development of the narrative allows us to identify the stylistic heterogeneity of the film and its highly original narrative treatment. Until the filming of Les Rochassiers, no other film on alpinism or rock climbing had used ambient sound; the noises made by birds and pitons, people conversing during the activity, as well as the sound of climbing equipment accompanied by an atonal, even brutal electronic music.