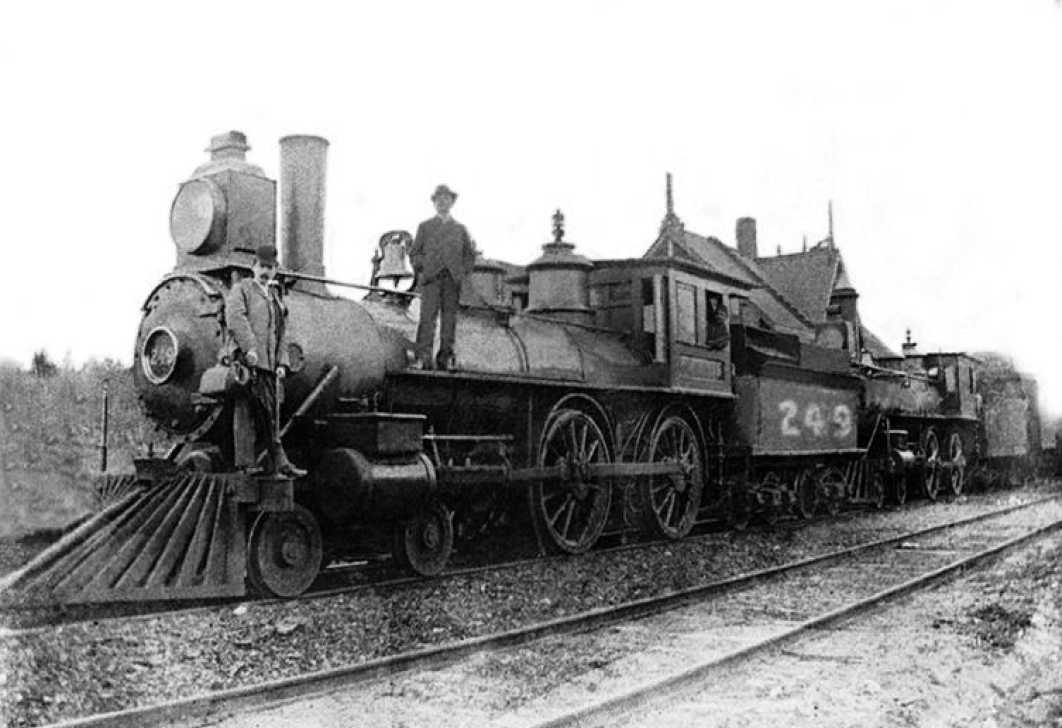 The train up North at Saint-Jérôme in 1876. A victory for Curé Labelle, who had used rather unorthodox means to promote his train project.

The winter of 1872 was one of the toughest Montrealers of the time could recall. All families in the poorer districts ran completely out of wood for heating. Some of them died due to exposure to the cold, and more than once local police and neighbours made macabre discoveries. Wanting to create excitement around his project of a “train for up North,” Curé Labelle appeared in Montréal wearing a coonskin coat, fur cap, wrapped in a long arrowhead sash, at the head of the longest winter convoy ever seen (with a gallon of caribou in each sled, it was said) coming down from the north to distribute precious loads of wood in the poorer districts.

Journalist Laurent Olivier David, father of Athanase David, who were to give their family name to our village, wrote about it in the January 25, 1872 edition of L’Opinion publique:

“Last Thursday (January 18, 1872), residents of Montréal were treated to a new and exciting spectacle. Eighty vehicles loaded with wood paraded through our streets. Some of them were double, meaning drawn by two horses, not one. An English flag floated above the first vehicle. Various groups of citizens stood on street corners observing the procession. No one seemed to know what it was about. But that didn’t last long! It was the folks from Saint-Jérôme who were coming down, led by their curé with a present of sixty cords of wood for the poorer citizens of Montréal. Here was another example of the parish priest of St-Jérôme’s theatrics, intending only to do good and which only he could have concocted. While wanting to be charitable, M. Labelle also wanted to show how the parishes to the north of the city could be useful for Montréal, if only they would agree to build the railway that was being demanded so strongly. This generous act on the part of the inhabitants of Saint-Jérôme was proof that they merited support for their project and it would be a mistake to deny them the possibility of working for the good of the country. The municipal authorities gave M. Labelle and his parishioner the welcome they deserved.”

The same load of sleds came down again in 1876, the same year the train up North was finally opened.