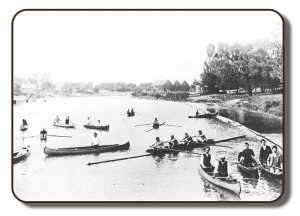 Just imagine yourself standing on the banks of the Saint John Harbour in the mid 19th century. The city is buzzing and the harbour is equally busy with water-based industry, ships of all sizes and shape pulling in and out of the harbour, and residents and tourists taking in the scenes of this picturesque port city.

Near the river’s mouth the waters are turbulent as the highest tides in the world cause the river to reverse its flow twice a day in a narrow gorge called the Reversing Falls. You also notice that the oarsmans working the waters are very rugged and strong, with such prowess on the water. Layer on the fact that brewing rivalries and wagering are motivating rowers to go faster and faster on their quest for bragging rights over their fellow oarsmen. Would they be the best competitive rowers in the world? 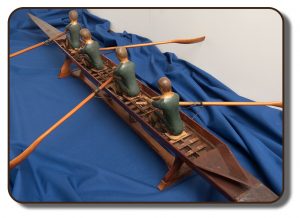 Wooden sculpture of the Saint John team in their rowing. scull

For several consecutive years the rowing teams from a hamlet within Saint John, known as Indiantown, were considered the best. Rivalries between the rowing crews, from a neighbouring hamlet called the Carleton area, lead them to construct a team of the strongest and best rowers to end the Indiantown dynasty. In the summer of 1866, at a rowing regatta dubbed “Father Dunphy’s Picnic” the Carleton Crew’s final recruit, Robert Price, joined forces with Samuel Hutton, Elijah Ross, and Robert Fulton to win a hotly contested race.  Finally the Carleton Crew had conquered their arch rivals and in doing so scored a measure of revenge. It was this win that would solidify the Carleton Crew’s chances of becoming World Champions at an upcoming Rowing Regatta in Paris, France.

Click here to hear the audio clip with complete transcript.