Just imagine how nervous these young men from Saint John, New Brunswick were as they lined up against the best amateur oarsmen from around the world. Being the only crew from North America, the crew from Saint John were simply called the “New Brunswickers”. They were to race crews from Paris, Liege, and Brighton and all were heavily favoured to beat the New Brunswickers.  The gun sounded and the crews were off.  The New Brunswickers reportedly didn’t have a chance; however they took an early lead, rowing some forty-six strokes per minute. 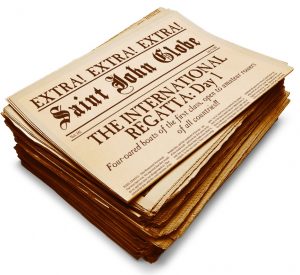 The news that the competitions have begun in Paris arrives in the hometown of “The Paris Crew”.

Their closest competitor was the hometown Parisian crew, the Geslings. With half the race distance travelled, the French crew made their move to advance. However, the determined effort of the Geslings was matched by the New Brunswickers and it was them who won the race and were rewarded with thunderous applause.

Word of the tremendous victories took 8 days to get back to Saint John:

Our boys have won. We expected that they would do so, and they have not disappointed us. In London, it was reported that, The Frenchmen of the Boulogne crew evinced unmistakably good form, as did also the Liege and Hamburg men, but most surprising than all was the remarkably easy victory of the Canadians over all comers. In heavy boats their victory, looking at their style of rowing, was sufficiently astonishing, but when they afterwards beat the pick perhaps of the London Rowing Club and Oxford University in an equally easy manner in out-riggers the excitement knew no bounds, and many and hearty were the congratulations bestowed upon them by crews from all nations. They were brought over here it would seem by J. A. Harding, the sheriff, we believe of their town, St. John’s N.B. and are splendid specimens of the perfectly-trained athletes. 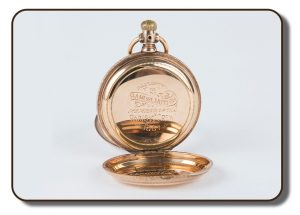 Engraved personalized pocket watch that once belonged to Samuel Hutton. Each of the four team members were awarded these for their win in Paris, France.