Kirkland Lake’s economy temporarily rebounded during the 1980s with rising gold prices, new gold discoveries near the town, and the sinking of a new shaft at the Macassa Mine. 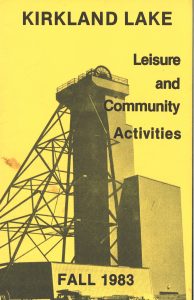 A booklet from 1983 has information for an active community. It features the newly constructed headframe from the Macassa Mine site.

However, this good news did not reverse the town’s fortunes. The population had already decreased to about 12,000 by the early 1980s – a drop of more than 40% after World War II. Adams Mine, which mined iron ore, closed in 1990 – another economic hit to the region.

Kirkland Lake was now just trying to prevent a further decline in people, jobs, and services to the community. But despite the many hardships, Kirkland Lakers still held on.

Their patience paid off, as by the early 2000s, a strong and steady resurgence in the price of gold would bring more prosperity to the town than it had seen in decades.

New mineral exploration was taking place both in and beyond the former Kirkland Lake Gold Camp with a similar excitement as that from a century earlier. The Macassa Mine property was reopened and again mining would be one of the main employers in town. And like it had been years before, this attracted miners and other workers to Kirkland Lake.

A Challenge for Newcomers 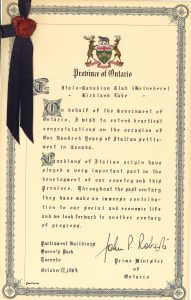 Many of these workers came from across Northern Ontario, and newcomers to Canada were also making the trek to Kirkland Lake. But unlike previous waves of immigration to the town, the clubs and societies that once existed to welcome these newcomers and help them adjust to their new home community, were no longer in place. People who had once been a part of these organizations had either passed away, left the community, or lost some of their traditions over the years in becoming part of a “Canadian” melting pot society.

Another challenge for some of these newcomers was that they came from countries that did not previously have a presence in Kirkland Lake through one of these organizations. This made that first connection to a community a difficult one for people who may not know anyone in the area or even speak the local languages.

In Sandra Reygada Licuime’s case, she arrived in Kirkland Lake shortly after marrying her Canadian husband in 2005. Her struggles with trying to adapt to living in this new community led her to join other newcomers to the Kirkland Lake area to form a multicultural group.

Sandra’s Arrival and Change in Kirkland Lake (close captions available in both French and English). Enjoy this video with an English transcript.

The Kirkland Lake Multicultural Group would grow over the years and include hundreds of members of both recent immigrants and long-time residents of the area.

The group is proud of many of the services they provide newcomers, helping them integrate into the Kirkland Lake community. The positive support they receive from the wider community is seen through organized activities for members and events like potluck suppers. The KLMG started small but is now one of the most vibrant organizations in the community through the dedicated work of their volunteers.

KLMG Events and Activities and Helping Newcomers (close captions available in both French and English). Enjoy this video with an English transcript.

They have given back to the Kirkland Lake community in many unique ways – including through local tourism.

Several members of the KLMG have created activities where they share the passion they have for their cultural traditions and their new home with both local and international visitors.  They host these activities as part of “101 Experiences”, a grassroots initiative promoting tourism in the Temiskaming region that started in 2019. From scone cooking classes to Bollywood dance, the hosts have brought a part of their culture to share, teach and enjoy with others.

For some of the KLMG members, all of these opportunities helped to create a greater sense of belonging in their new home, all while keeping their cultural traditions alive.

Changing Times, Keeping Traditions Over a Century of Celebration