After decades of a near steady decline, the price of gold dropped to the point that it became more expensive to extract the ore than to keep the mines open in Kirkland Lake. The mines closed one after the other along the Mile of Gold until only the Macassa Mine remained open in 1969. 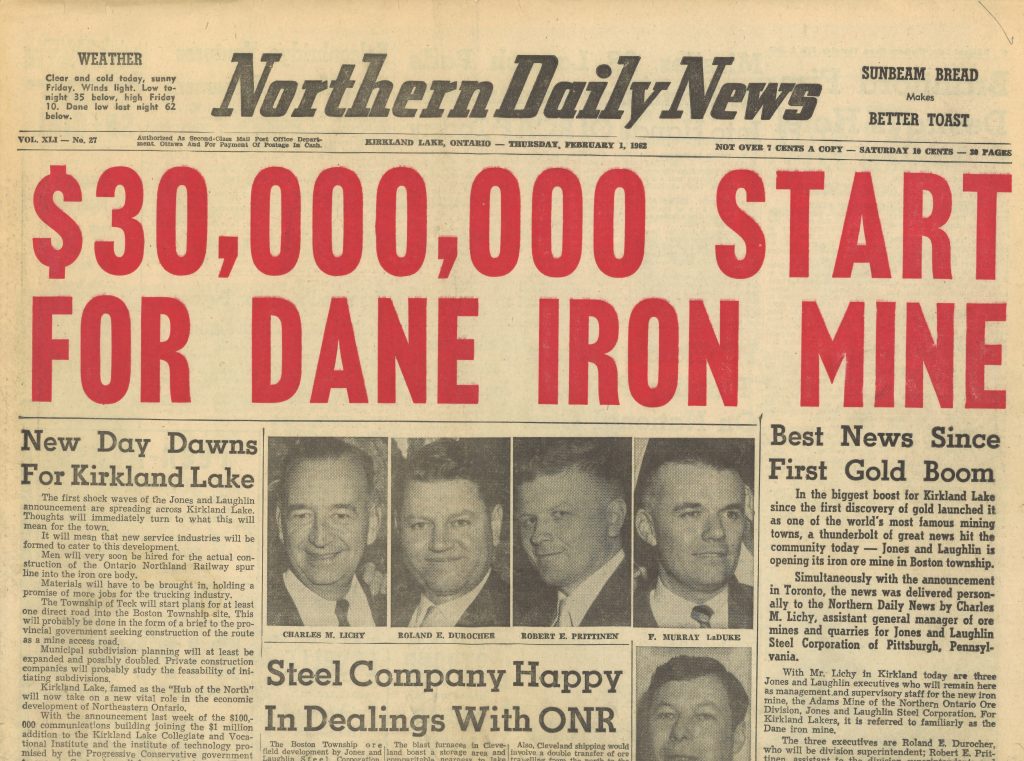 Front page of local newspaper about Adams Mine, 1962

An iron ore open-pit mine opened outside of town in the 1960s, but by now the population of miners had reduced from thousands to only hundreds of workers. The closure of the gold mines, the main employers for the town, had a domino effect on the rest of the community.

The decrease in mining jobs meant the slow migration of workers and their families from Kirkland Lake to other mining communities, or industries outside of Northern Ontario. Those involved with other local industries like forestry and farming were able to ride out the economic uncertainty. 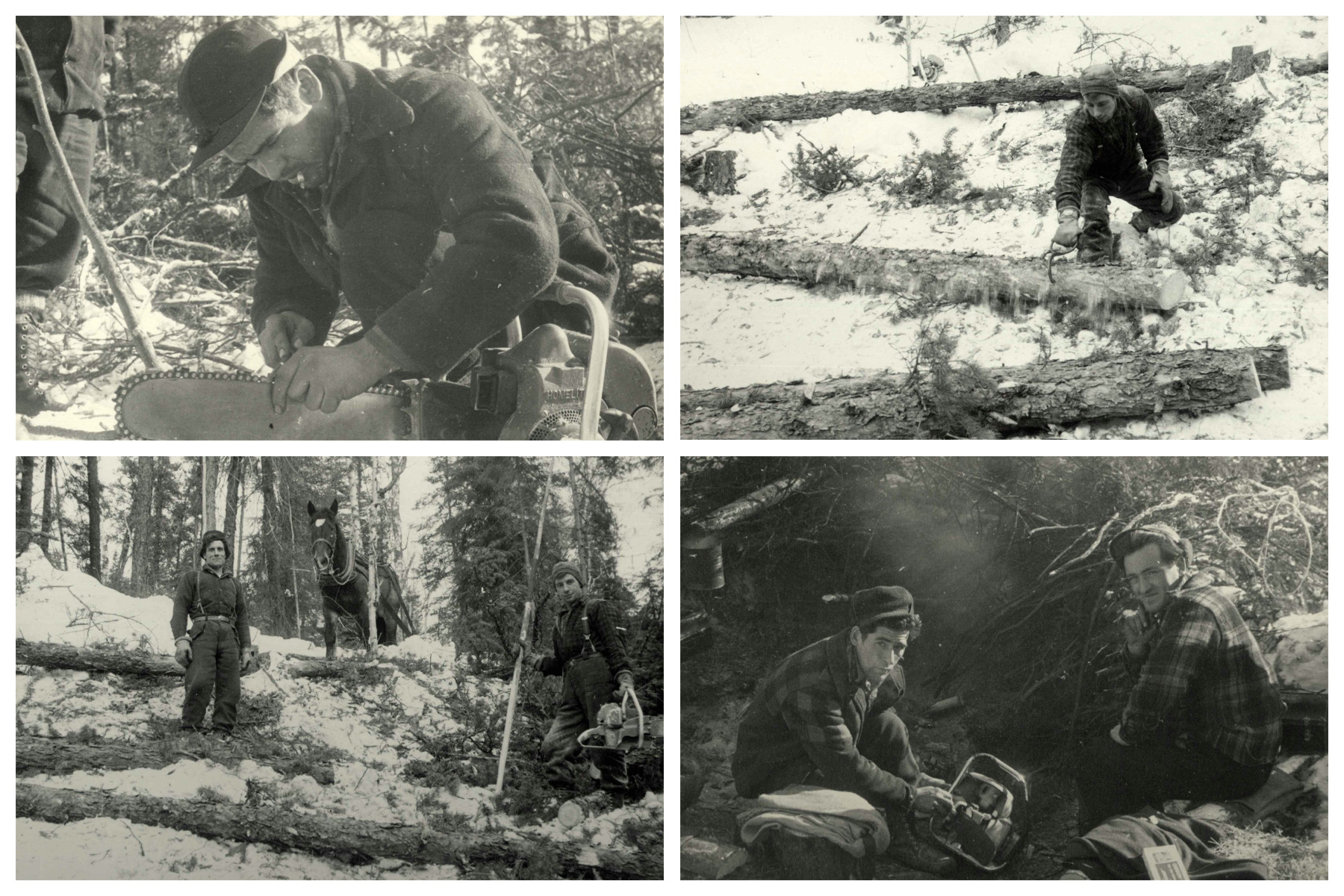 Fewer customers meant a harder time for businesses to stay afloat, with some owners making the difficult decision to close their doors and relocate their families. A smaller community also meant a loss of professional services.

An example of this was with the local hospital. Doctors and nurses continued to provide a high level of care, but some medical services were found lacking after specialist positions moved away to larger northern cities. 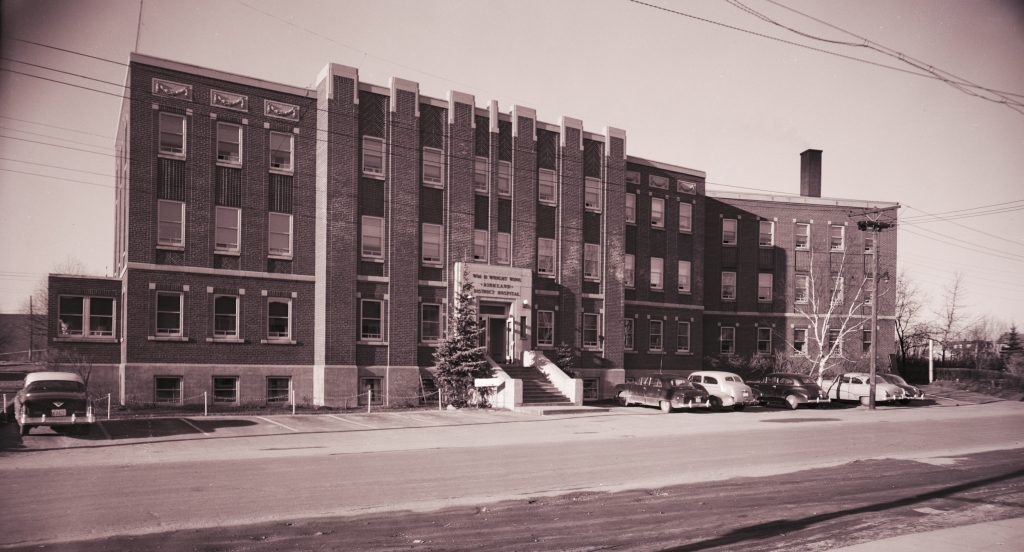 Kirkland District Hospital in the 1950s

With fewer jobs available, there was less reason for many recent college graduates to return to their hometown. Their careers would take them outside of the area, and a future beyond Kirkland Lake. In some cases, their parents (if not retired) also left town to find work in other communities.

Kirkland Lake was no longer the thriving community of earlier decades, taking in newcomers; it was now exporting its own. But even when unable to return to Kirkland Lake, these people still carried fond memories of the community. An “X-KLer” was always a Kirkland Laker at heart.

For those who remained in Kirkland Lake, cultural traditions continued but on a much smaller scale over the next several decades.  Service organizations and clubs with fewer members like B’nai B’rith and the Italo-Canadian Club closed their doors for good. 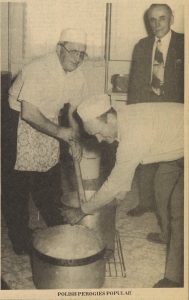 Making perogies for the Kirkland Lake Multicultural Festival of 1979

The Polish Hall adapted over the years from being a social organization for the Polish population to serving the broader community as a host of events and activities. A large Francophone population in the community kept the local Club Richelieu active.

Even in a town that was losing its mines and other businesses, the people who remained came together to find ways to celebrate their heritage and connection to the community as a whole.

The Kirkland Lake Multi-Cultural Festivals of the 1970s were a popular way to do this. Displays featured live music, dance, national costumes and folk crafts. And what better way to connect with people than through samples of traditional foods.

The nationalities represented were mostly Eastern European along with Lebanese, Italian, Irish, Chinese and French Canadian. Metis culture had a presence at the 1979 festival, though local Indigenous representation was absent. 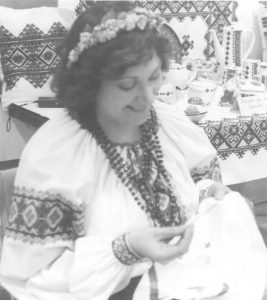 Pamphlet for the 1976 Multicultural Festival

Several groups from the community without a kiosk were the English, Scottish and Welsh. This was most likely because the British settlers had such a strong influence since the founding of Kirkland Lake – and across most of Canada – that they did not fit in with the Festival’s purpose of “promoting the preservation, development and advancement of the cultural heritage of the various ethnic groups in Kirkland Lake”.

Although the population’s afterschool cultural classes were disappearing, this did not stop the older generation from passing traditions on to their children and sharing their culture with others in the community.

Post-war: Kirkland Lake Youth and Education Resilience and a Multicultural Group for All