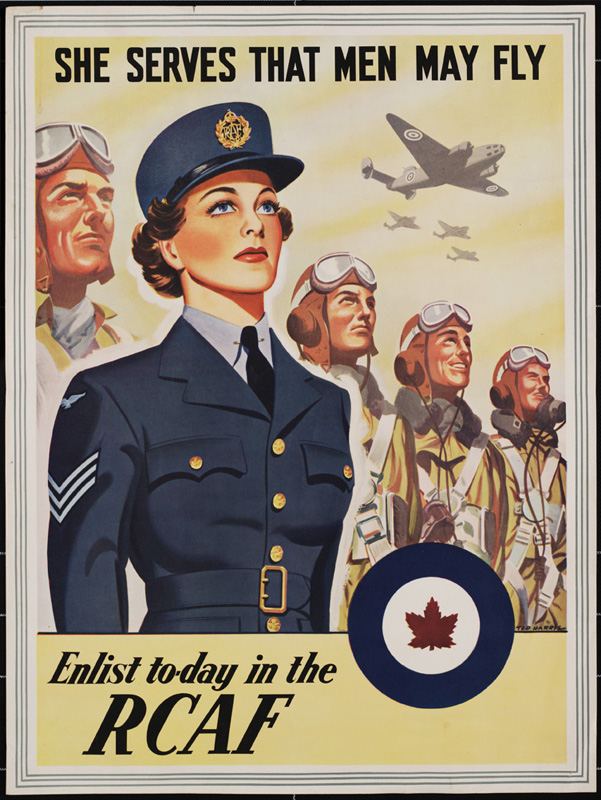 Women became part of BCATP  in Canada in 1941 when the Women’s Auxiliary Air Force was established.

She Serves that Men May Fly

Prior to 1939, women were not able to enlist in the Canadian Forces. In WWI, women had played an “unofficial” supporting role, mostly on the home front. Their only official role in the military at that time was as nurses and administrative staff in hospitals – both in the battlegrounds across Europe and in the safety of Great Britain.

WWII changed everything. The sheer number of soldiers, sailors and airmen needed to suppress enemy forces meant that every fit male recruit was needed for active air, sea and ground duty overseas. 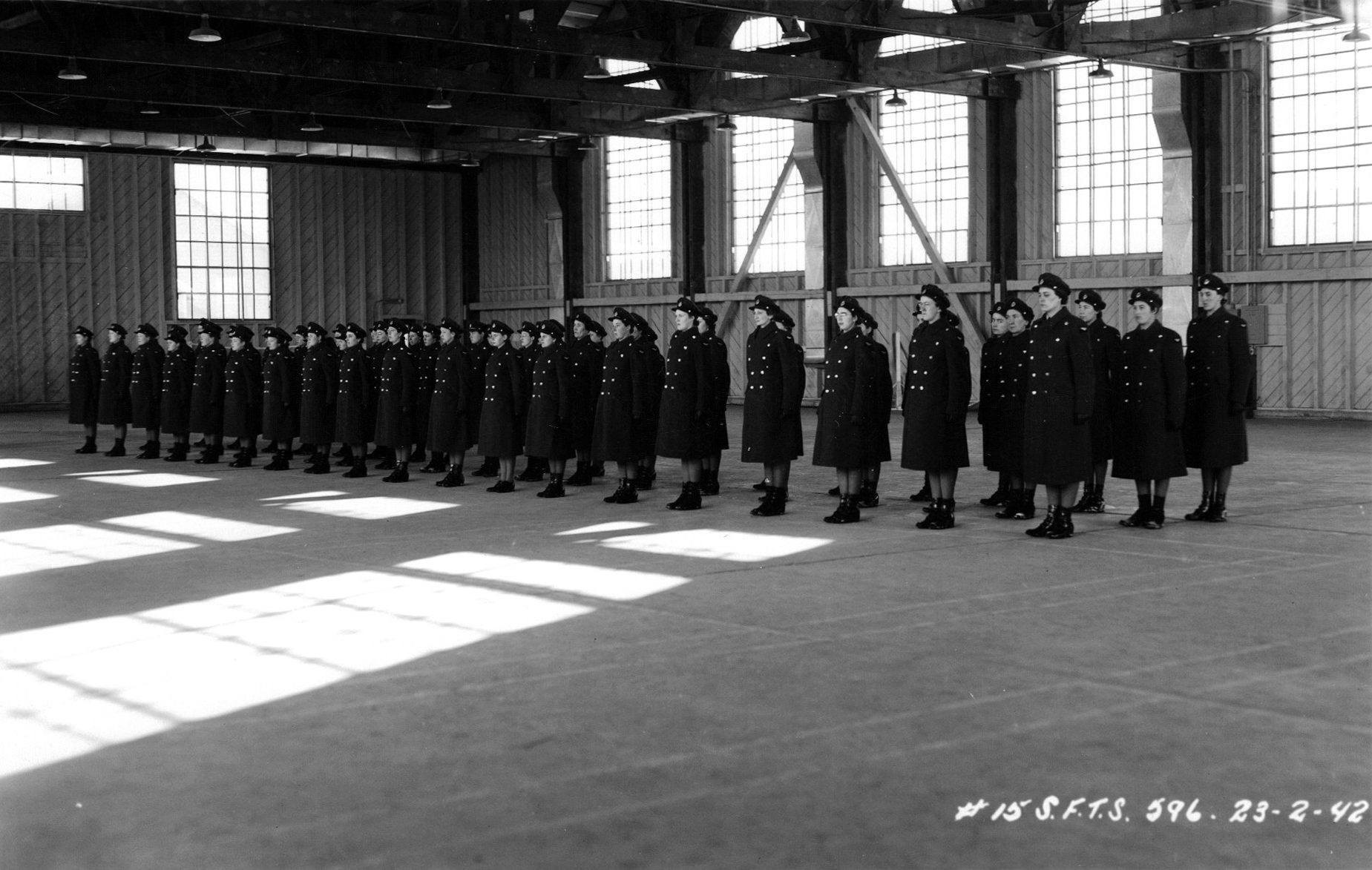 The RCAF Women’s Division awaiting initial inspection upon arrival at No. 15 SFTS.

The Creation of the Women’s Division

In June 1941, the RCAF created the Canadian Auxiliary Air Force.

Great care was taken in choosing the first group of officers and NCOs which was to form the foundation of the Women’s Division. Choosing 150 applicants from the thousands of applications received from across Canada was an arduous task. 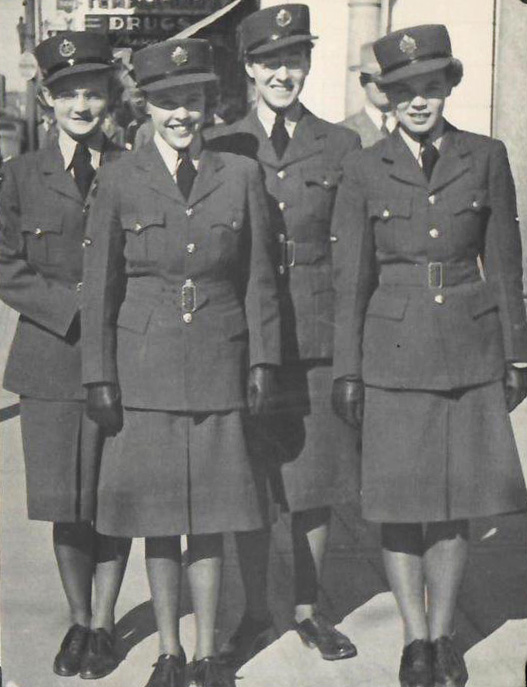 An oversight board of RCAF and WAAF officers from England, travelled from Halifax to Vancouver interviewing the first class of air women.

Officer recruits were expected to have previous experience working with people, in business or volunteer work, and have a natural aptitude for organizing people. They were judged on their ability to take responsibility, leadership potential, intelligence and character.

Of those 150 chosen, the first class of recruits consisted of lawyers, doctors, dieticians, librarians, business administrators and other professional women. 7% of this group held a university degree, and 70% had a high school diploma.

After an intensive five-week course at Old Havergal College in Toronto, the newly appointed officers set out to prove they were more than capable of taking on whatever task the RCAF allotted them.

Many of that first group of women officers stayed on at the training depot in Toronto to train new recruits. Others were sent to posts at Air Force Headquarters in Ottawa, as well as operational commands, Service Flying Training Schools, and Bombing and Gunnery Schools across the country.

Based on the initial success of the Auxiliary program, it was renamed the RCAF Women’s Division in February 1942. The women were very well-respected by their male counterparts and were commonly referred to as the “WDs.”

The WDs Arrive in Claresholm

Claresholm was one of the first airbases to welcome airwomen to their training station. The first draft of the Women’s Division arrived at the Claresholm train station on February 23rd, 1942.

According to the tongue in cheek article in “Windy Wings” Final Edition, March 1945, the WDs were greeted with “…peering glances out of the windows, cracks in the doors and from behind lamp-posts by the male portion of the Station, as well as with the apparent disapproval of the weatherman, who furnished a cold and chilly day for their arrival; and strange as it seems, every businessman in Claresholm had a letter to mail on the train this particular morning.”

Upon arrival, the Women’s Division were taken over by Assistant Section Officer Elizabeth Bie and Sergeant Margaret Sanderson. AS/O Bie and Sgt Sanderson had arrived at the airbase a week earlier in order to prepare the for rest of the WDs to arrive.

This draft of 62 women included many Albertans. A second batch of 16 women arrived the next day, for a total of 78 WDs on site. 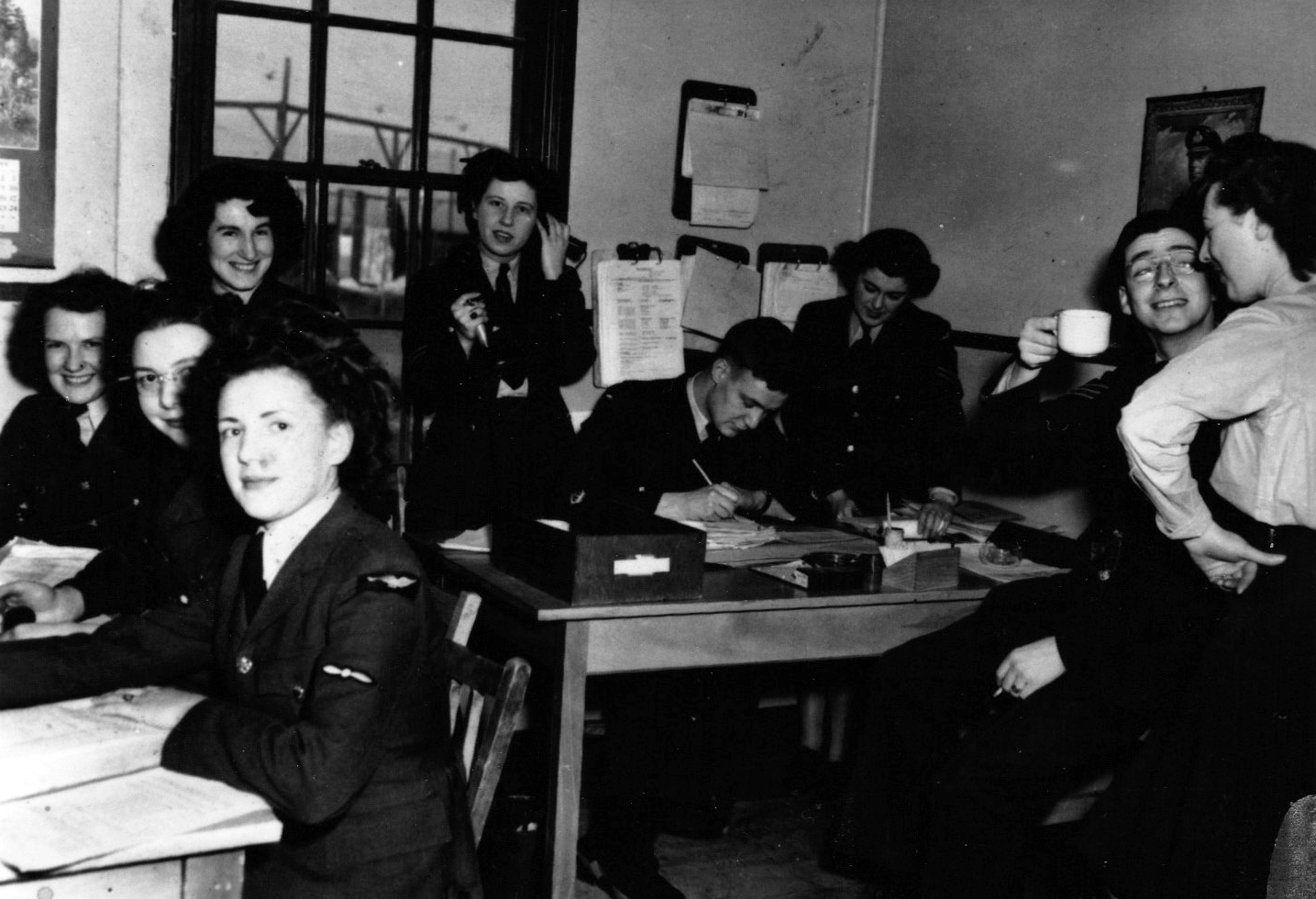 Many women worked in office administration, as accounting clerks, stenographers, among other duties.

The WDs’ role overall was the administration and operation of the school. Their initial duties included those of accountants, various clerks, dispensers, equipment assistants, telephone operators, postal clerks, drivers, cooks, fabric workers and other general duties. 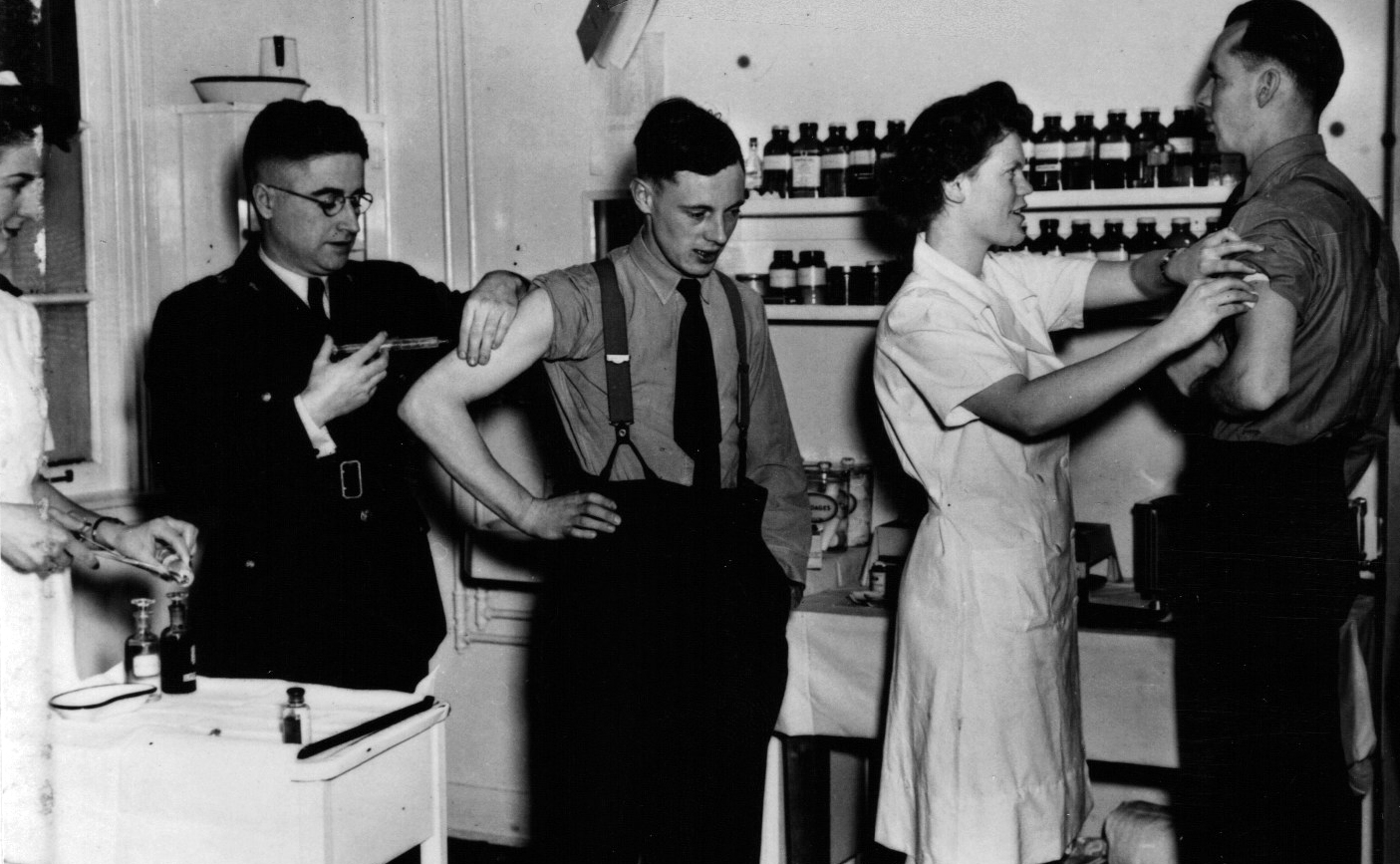 Women took on traditional roles such as nurses, as well as hospital assistants and laboratory technicians. 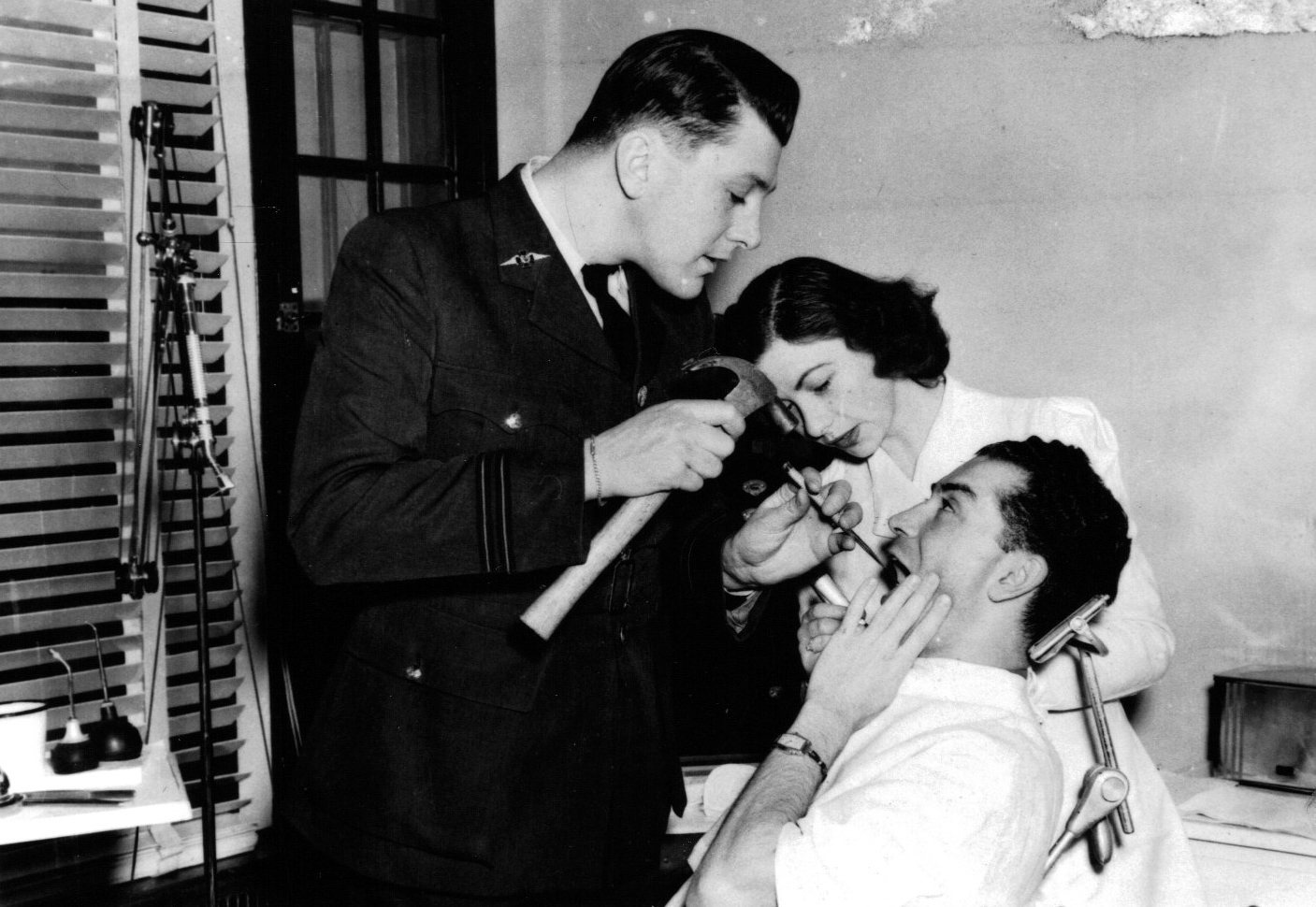 Women also served as dental assistants…and managing the hijinks of the dentist!

As time passed, the Women’s Division took on more and more of the jobs that had typically been thought of as “men’s jobs,” freeing the men to move on to other duties. This included jobs like: photographers, radiographers, instrument makers, photo and surveillance interpreters, timekeepers, meteorologists, police, even air traffic controllers!

Women worked in the parachute packing and checking department.

Women were even tasked with the most important job in the RCAF – the parachute rigging. There was only one chance to get the job done right in the parachute department! 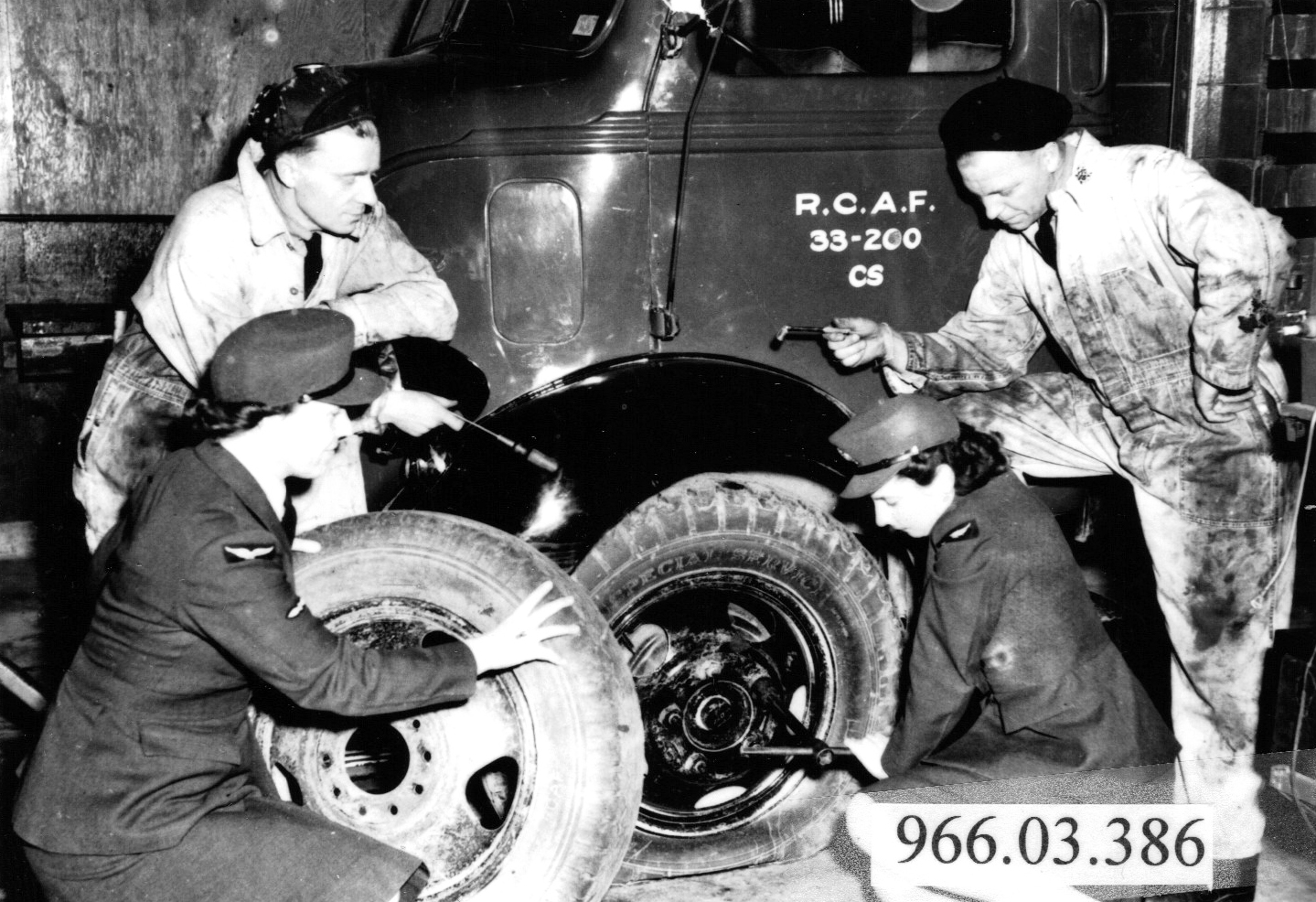 WDs work in transportation to start with, but eventually worked as mechanics as well.

By the end of WWII, the Women’s Division had taken on almost every role imaginable in Canada and overseas – barring active combat – including roles as airplane mechanics and ground crew, base administration and wireless operators.

Some airwomen in the RAF and RCAF stationed in Britain were even tasked with transporting aircraft to different locations, as pilots! 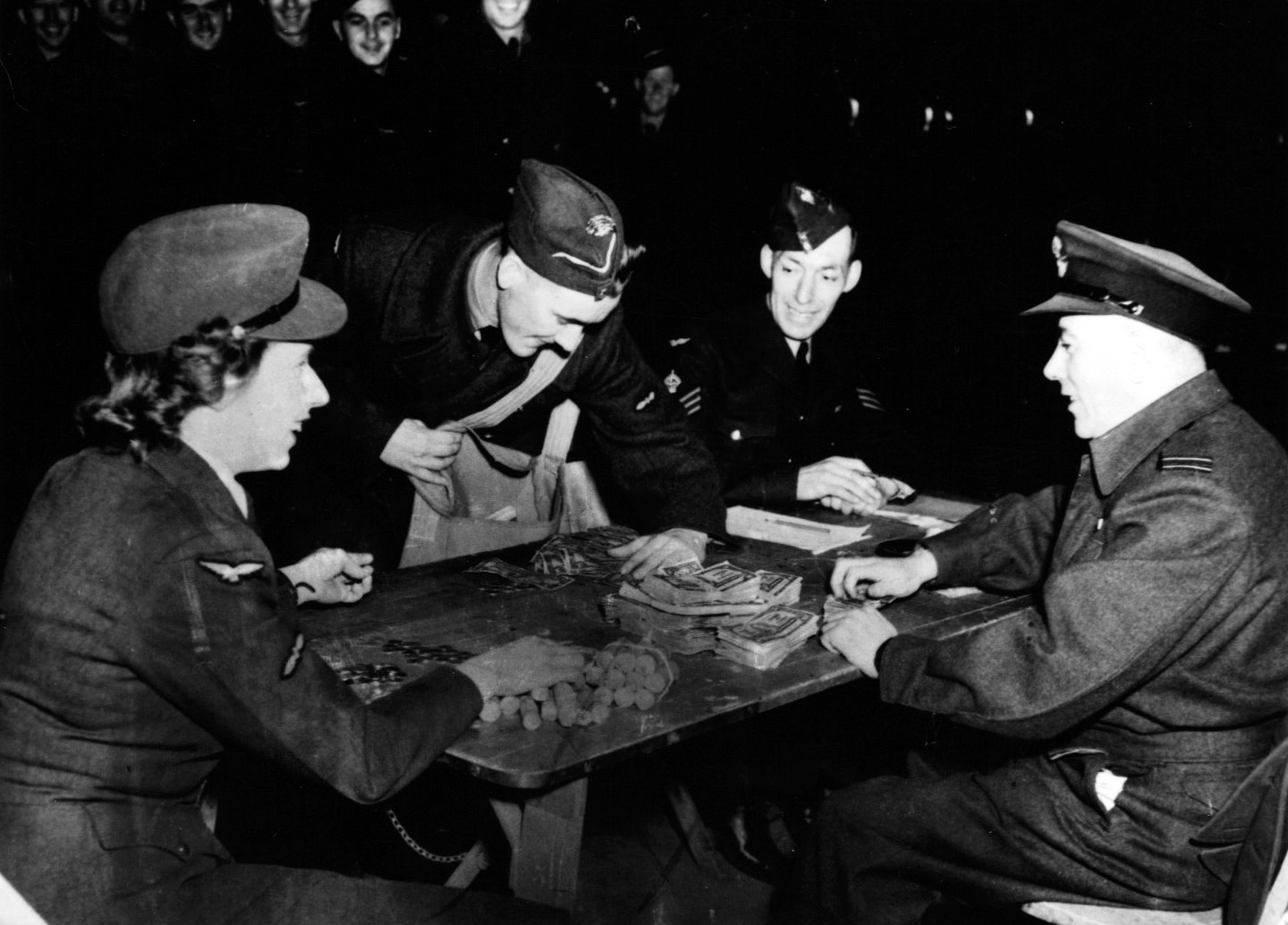 There was strong camaraderie on the airbase between the men and women serving there.

By January 1944, there were over 200 airwomen residing at the Claresholm airbase. When the RCAF Women’s Division was in full swing, there were over 17,000 women serving at air bases across the country and overseas.

Thirty women lost their lives in service to the RCAF in WWII. One of those deaths was at Claresholm. (See below)

Women were finally accepted as full-fledged RCAF pilots in 1980. Canada led the military world in allowing female fighter pilots in 1988 – almost 50 years after the creation of the Women’s Auxiliary Air Force. 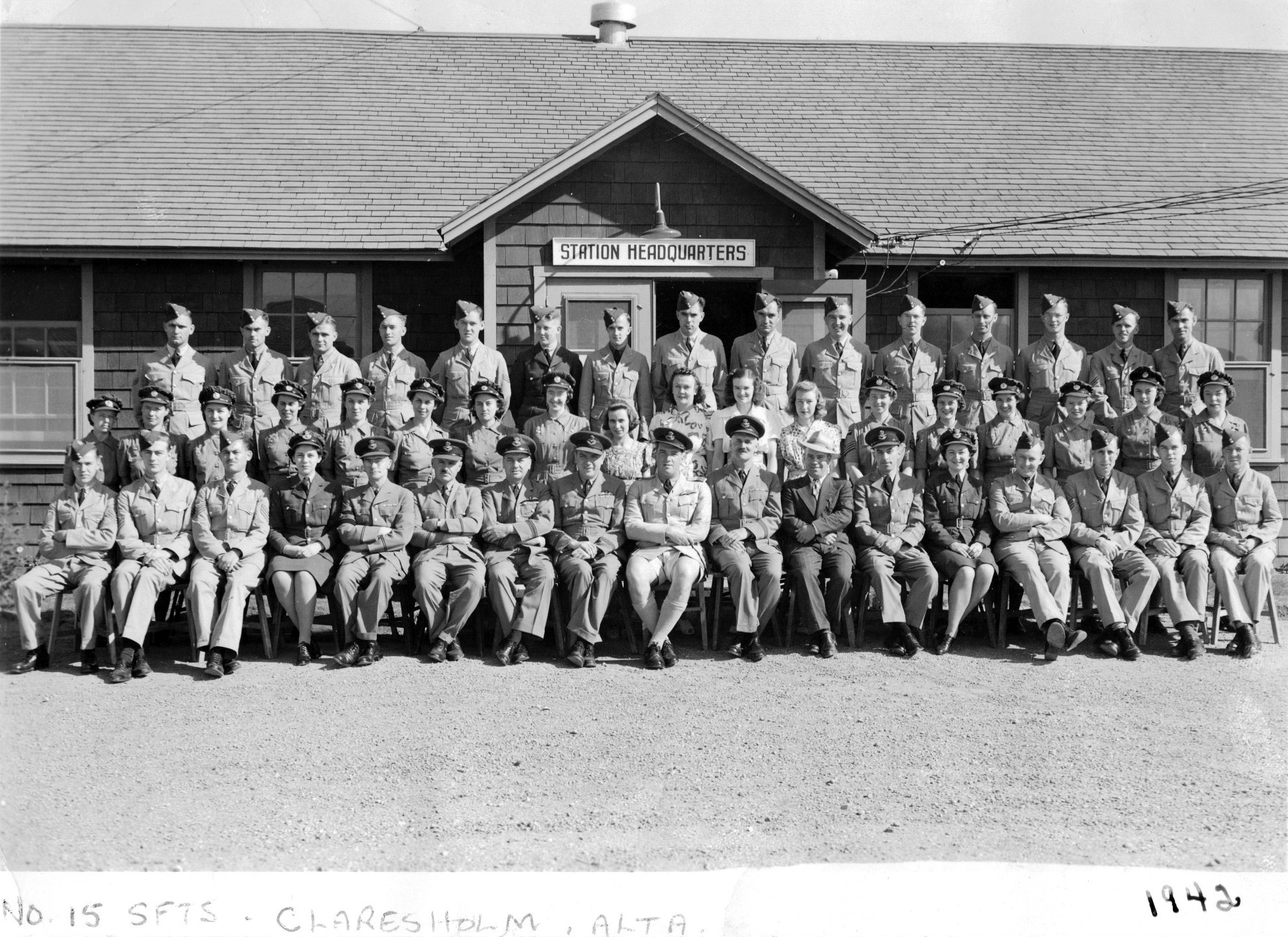 Male and female officers at No. SFTS in Summer of 1942, AS/O Rose Goodman first row, 5th from right.

Rose Goodman was a promising young woman from Halifax, NS. She had just graduated from Dalhousie University with a Bachelor of Arts degree when the RCAF formed the Canadian Auxiliary Air Force.

In October 1941, Rose Goodman enlisted and was one of the 150 women to graduate from the initial Administrative Training. From there, Goodman went on to instruct in Moncton, NB, before being posted to No. 15 SFTS on July 27, 1942. At Claresholm, Goodman was put in the position of Adjutant Section Officer, assisting the Commanding Officer with airbase administration.

As a cheerful, enthusiastic and intelligent air woman, AS/O Goodman was well liked on the airbase by both the male and female personnel.

On the chilly afternoon January 26, 1943, Rose Goodman celebrated the marriage of two friends and colleagues at No. 15 SFTS. After the ceremony, Rose escorted Pilot Officer PD Meyers on an impromptu flight to Lethbridge to ensure their newly wedded friends arrived in time to catch their honeymoon flight to Vancouver. 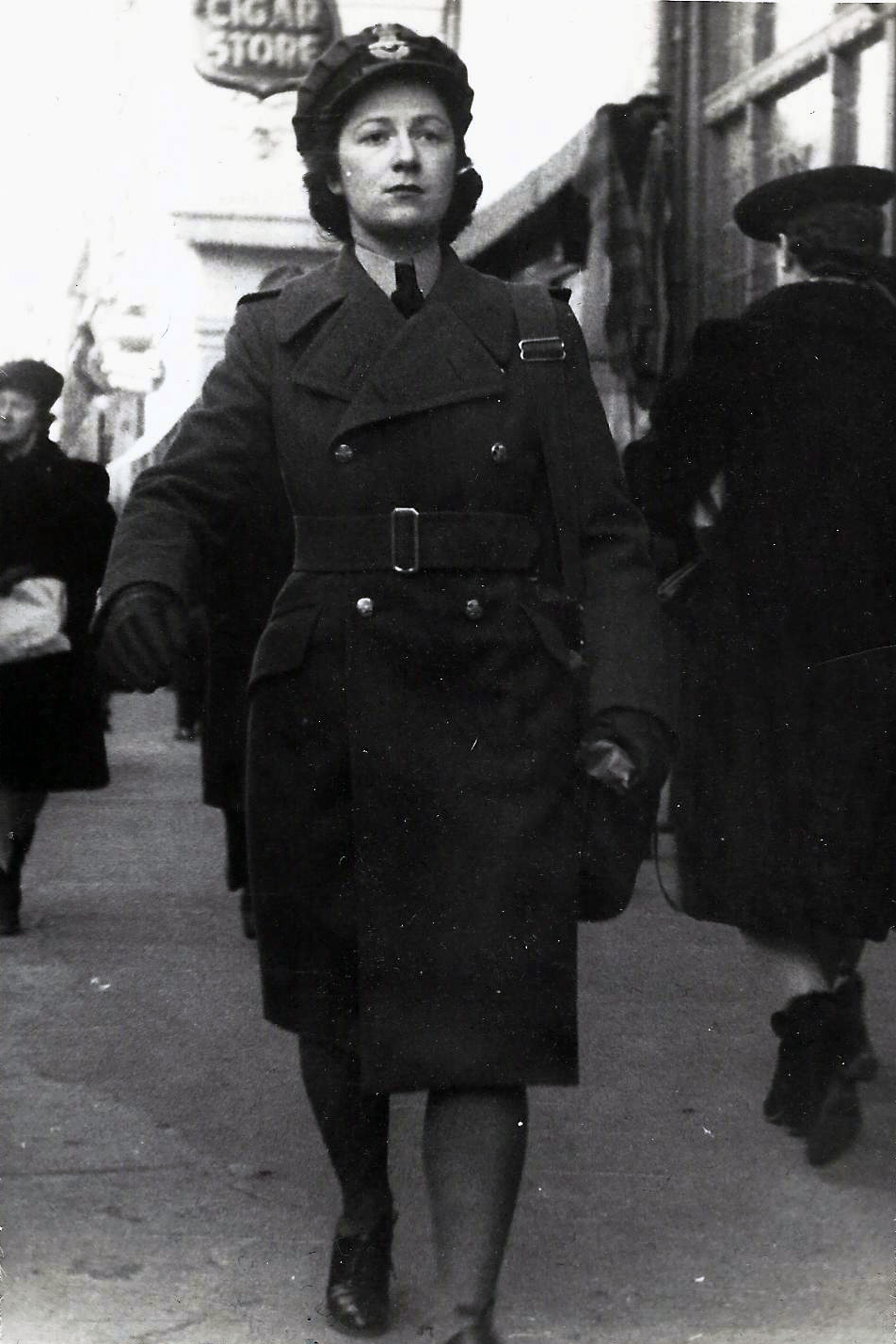 AS/O Goodman on leave in Calgary.

Returning to Claresholm that evening, Goodman and Meyer’s Cessna Crane crashed in a farmer’s field, not far from the emergency landing strip at Woodhouse, just 8 miles SE of the airbase. P/O Meyers sustained minor injuries from the crash.

Rose Goodman was killed on impact. A service was held for her on January 29th at No. 15 SFTS, before her remains were transported to Montreal for internment.

She was buried with full military honours at the Spanish and Portuguese Congregation Sherith Israel cemetery in Montreal, PQ.

AS/O Goodman was the first of only 30 WDs to lose their lives in active service in the RCAF. She was also the only Jewish woman to do so.

The passing of AS/O Goodman was mentioned in the WDs’ section of the final edition of “Windy Wings” in March 1945:
But there is one sad spot to remember, the death by accident of AS/O Goodman, who was liked by all who knew her. It is here we pay tribute to a gallant woman who did her job well and gave her life doing it. 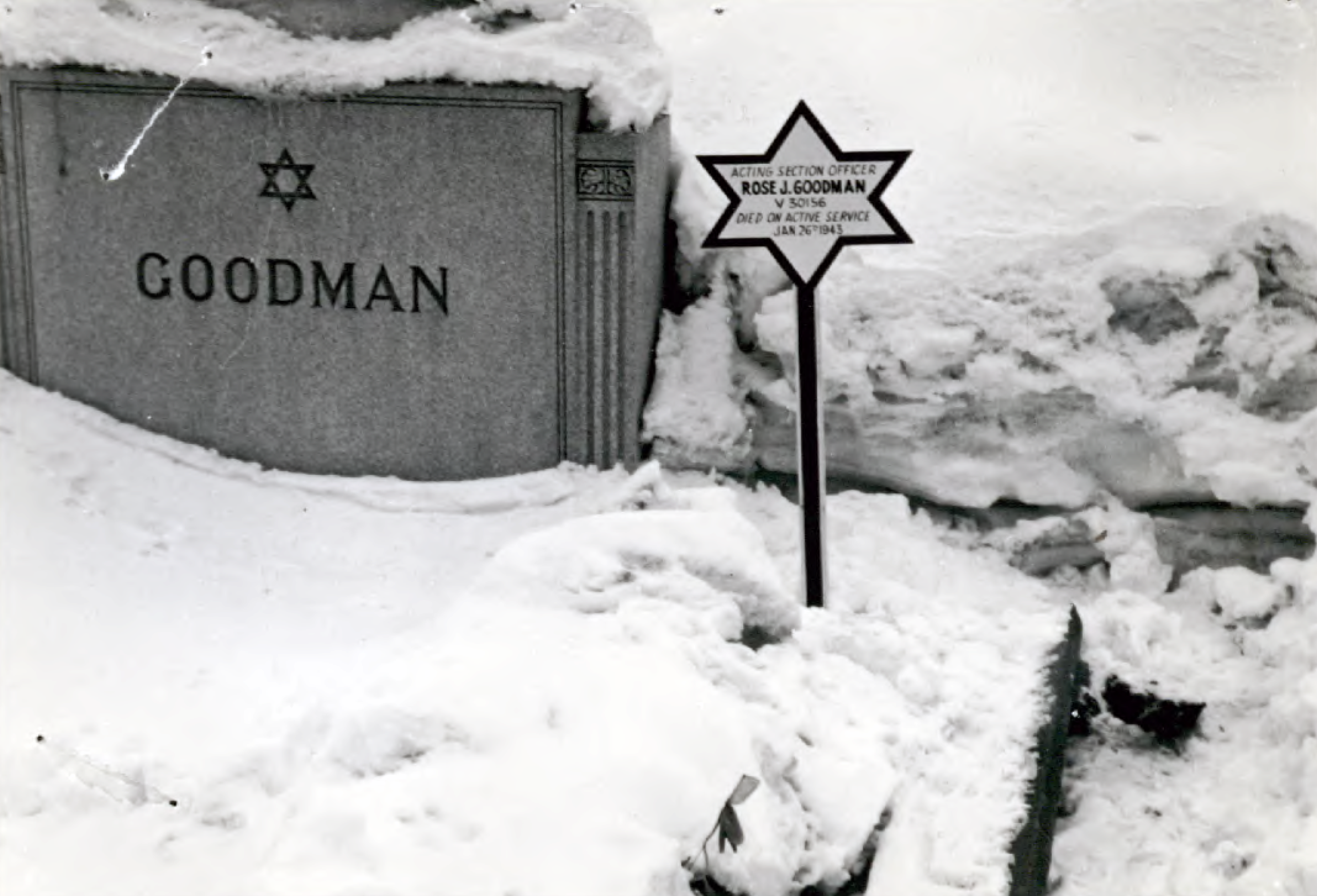