Of course, it wasn’t always serious business at No. 15 SFTS. After much on-base debate, it was decided that the school was in need of their very own mascot – and that this mascot should be a donkey, of all animals!

A call was put out in the “Rocky Mountain News,” of Denver, Colorado. While many communities responded to this request, the community of Fairplay, CO, won the hearts and minds of No. 15 SFTS with their Rocky Mountain Burro, “Prunes Jr.”

Prunes Jr was the progeny of the famous Prunes Sr, who lived in the community of Fairplay (South Park). Prunes Sr was said to be the smartest burro ever known in Colorado. How smart was Prunes Sr? He was so smart that he would deliver mail to Colorado prospectors working in the mountains – on his own – and is said to never have missed a day!

The decision was made. Sponsored by the Fairplay Chamber of Commerce, Prunes Jr was shipped from Colorado to Claresholm by rail. After a short stop-over at Colorado zoo, Prunes Jr arrived at No. 15 SFTS in late July of 1943. 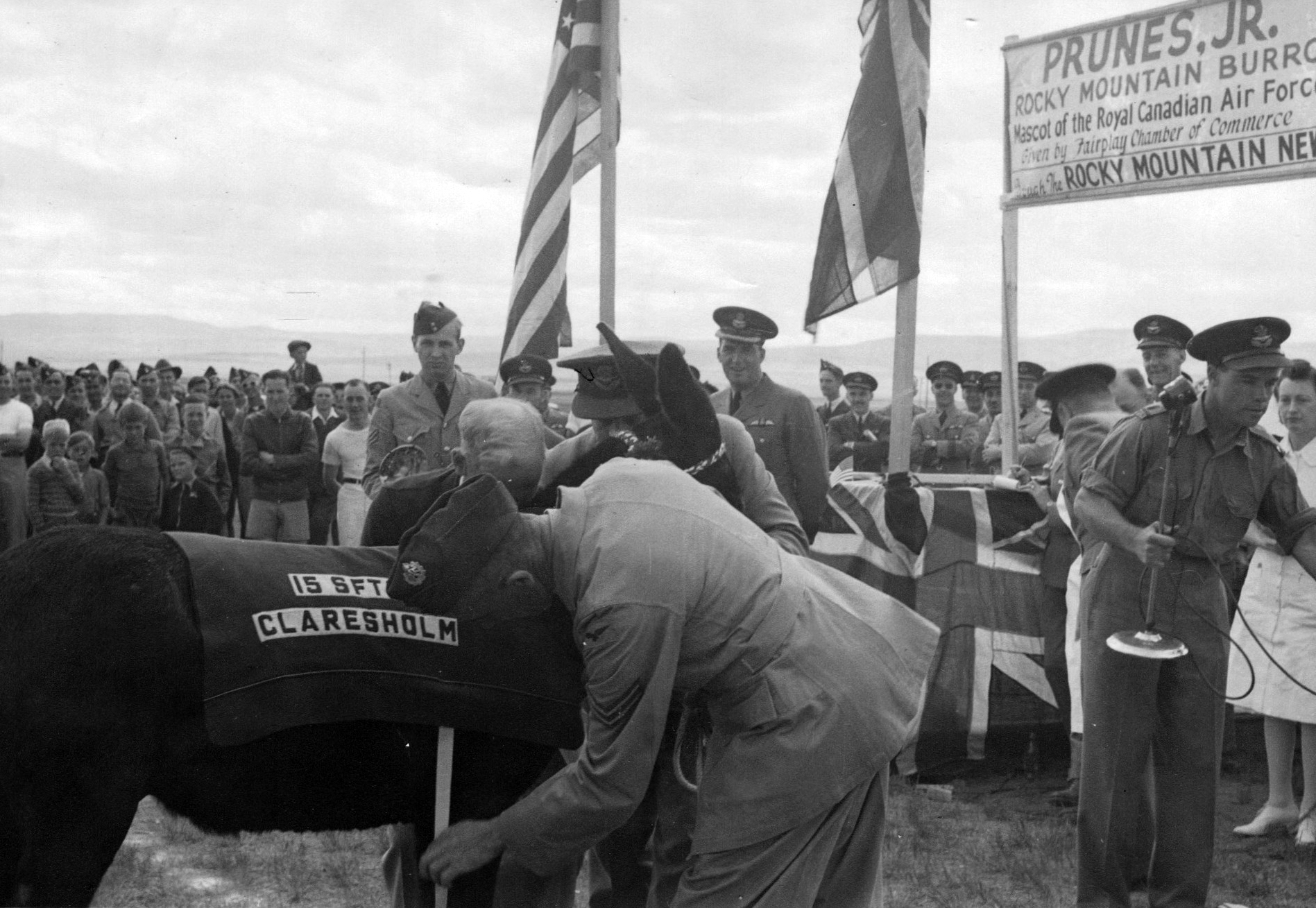 Officer Prunes Jr being fitted with his uniform.

Prunes Jr was inducted as the mascot for No. 15 SFTS on the 2nd anniversary of the airbase on August 16, 1943. Prunes Jr’s induction was attended by hundreds of locals, as well as military personnel. 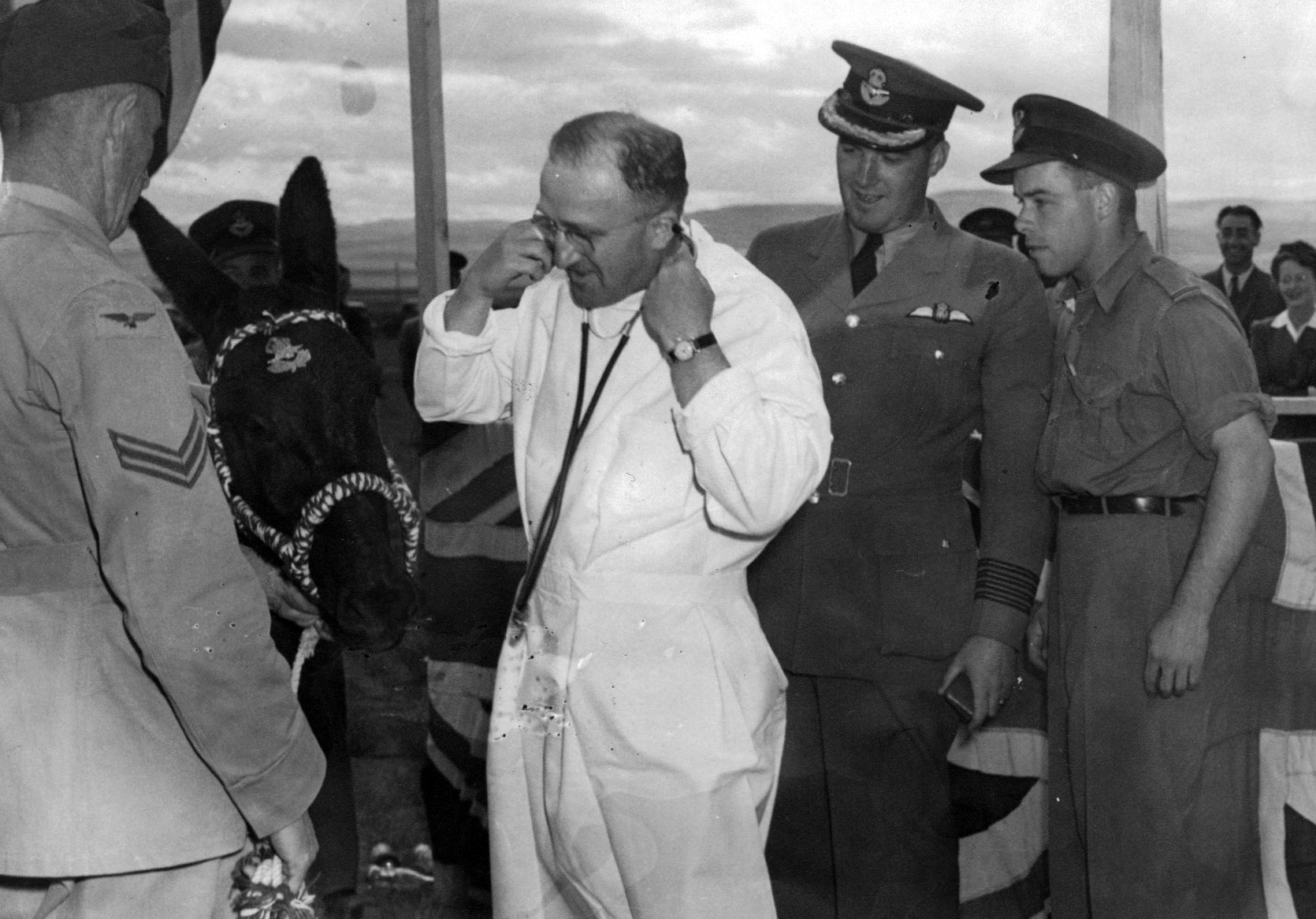 The burro undergoing his medical examination prior to acceptance as No. 15 SFTS’ official mascot. 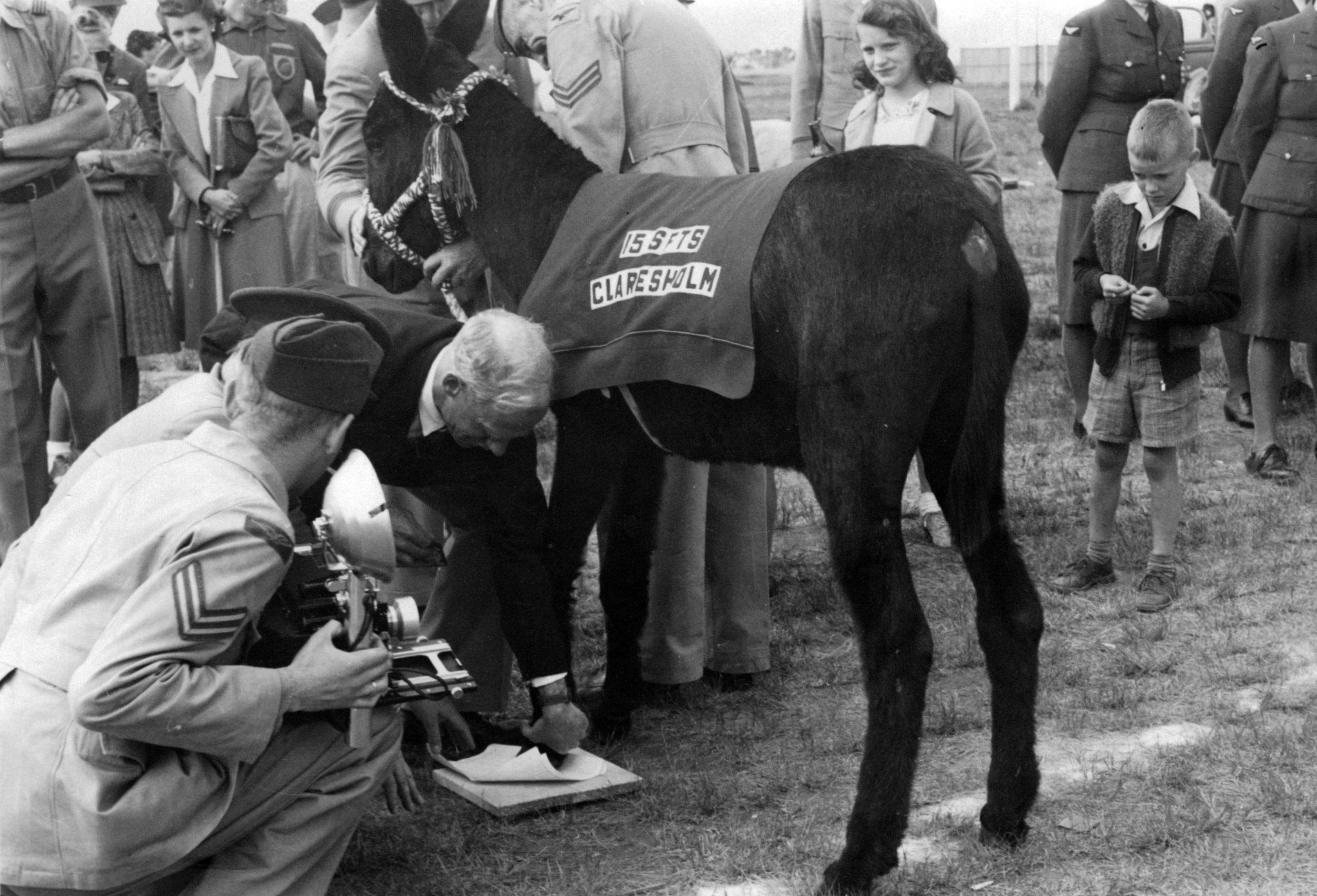 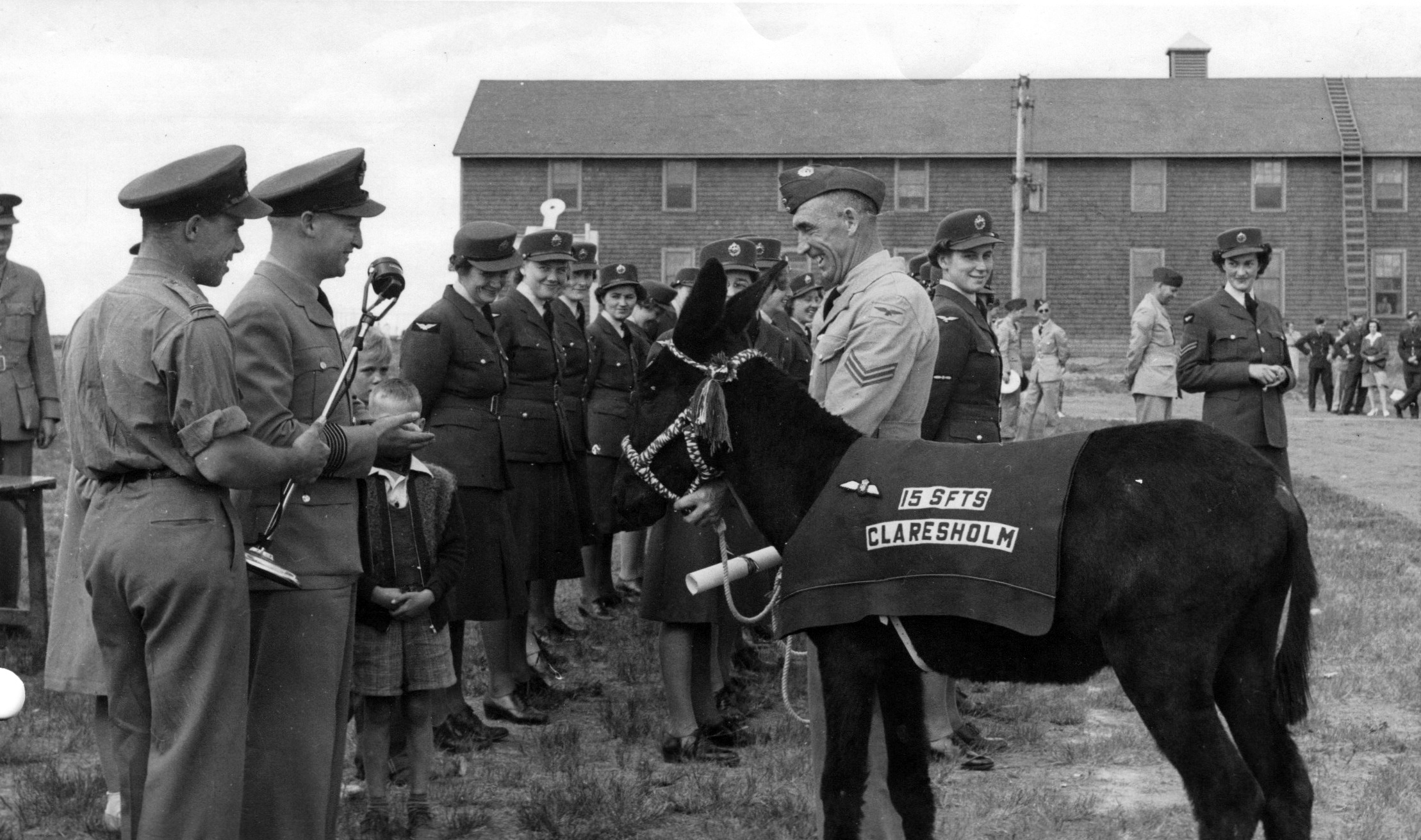 Officer Prunes Jr is presented to officers and the public as the official mascot by Cpl Sparrow.

Prunes Jr was a well-liked addition and was the instigator (allegedly) of many shenanigans on the airbase in his time there. He was promoted to “Flying Officer” (Pilot Officer) on the 3rd Anniversary of  No. 15 SFTS, on August 16, 1944. 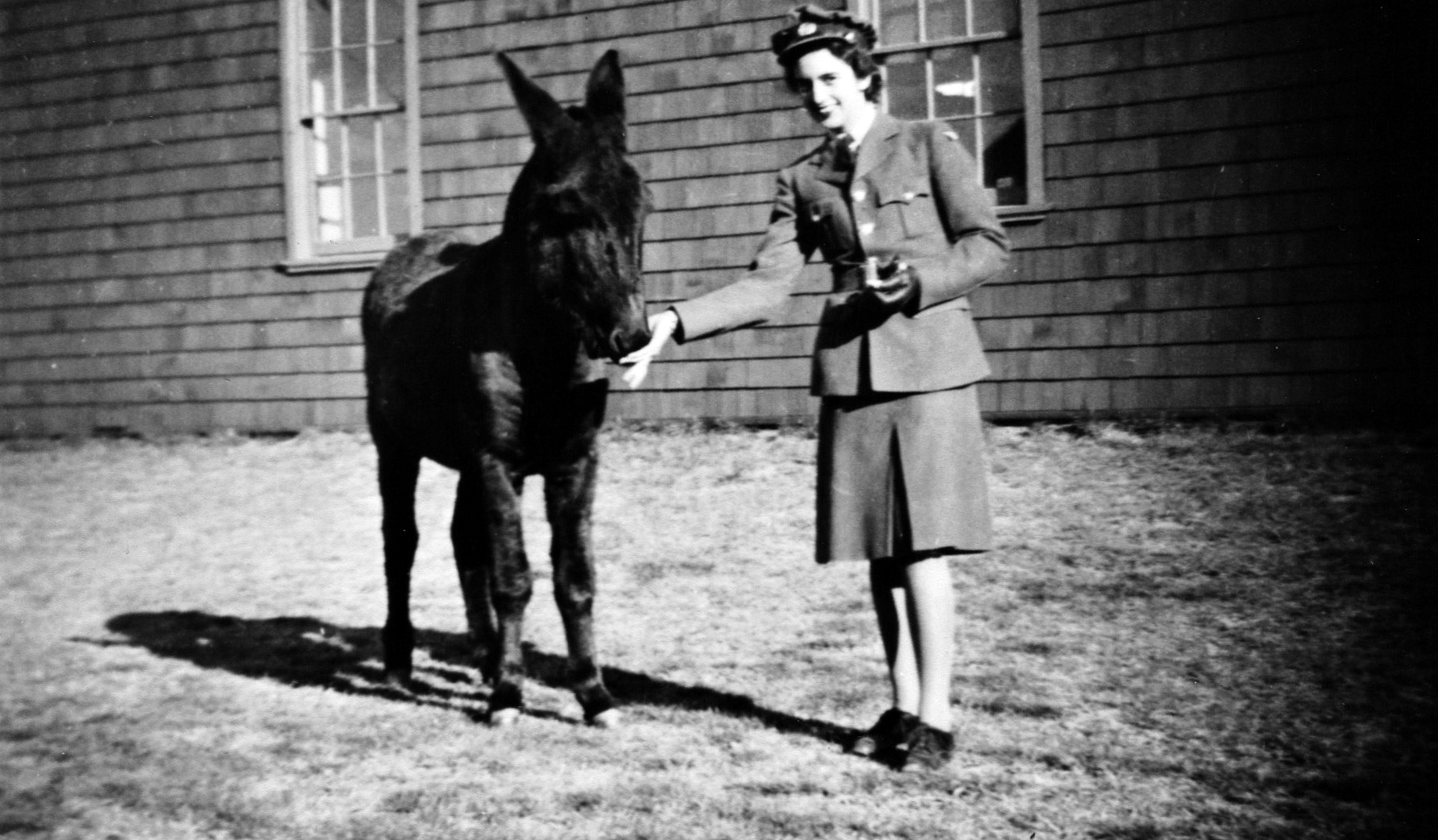 F/O Prunes Jr proved himself to be somewhat of a lady’s man on the base.

Flying Officer Prunes Jr resided at the Claresholm airbase from the time of his inauguration until he was retired as mascot at the end of the British Commonwealth Air Training Program in 1945. 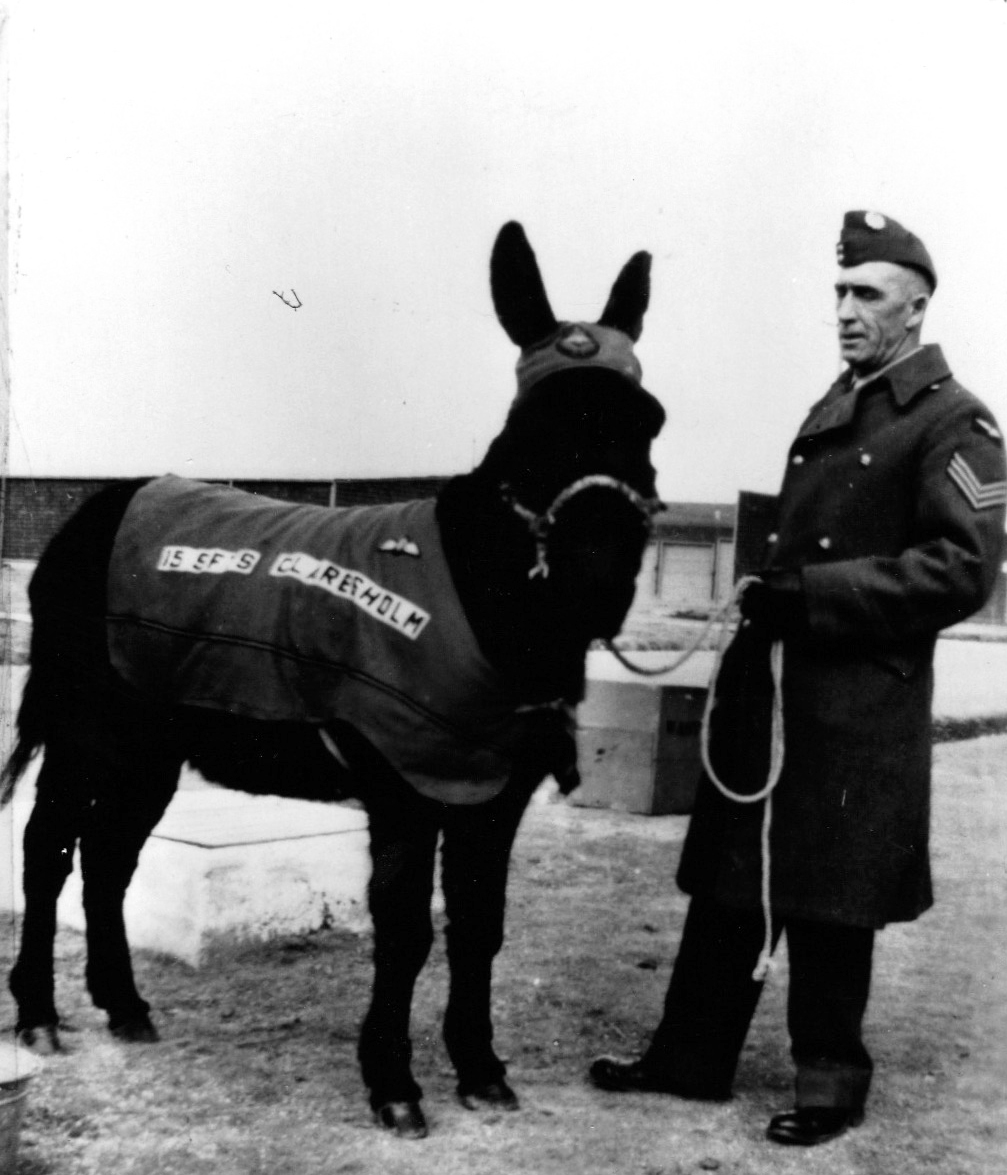 P/O Prunes gives his signature “V” for Victory sign with his ears, with fellow serviceman and close friend Sgt Sparrow.

Upon release from his duties on No. 15 SFTS, P/O Prunes Jr returned to Colorado. He continued in public service, touring various community events around the state. Prunes Jr’s offspring undoubtedly continue to participate in Fairplay, CO’s annual Burro Days festival each July.

The Walt Disney Connection The Official RCAF Crest of No. 15 SFTS