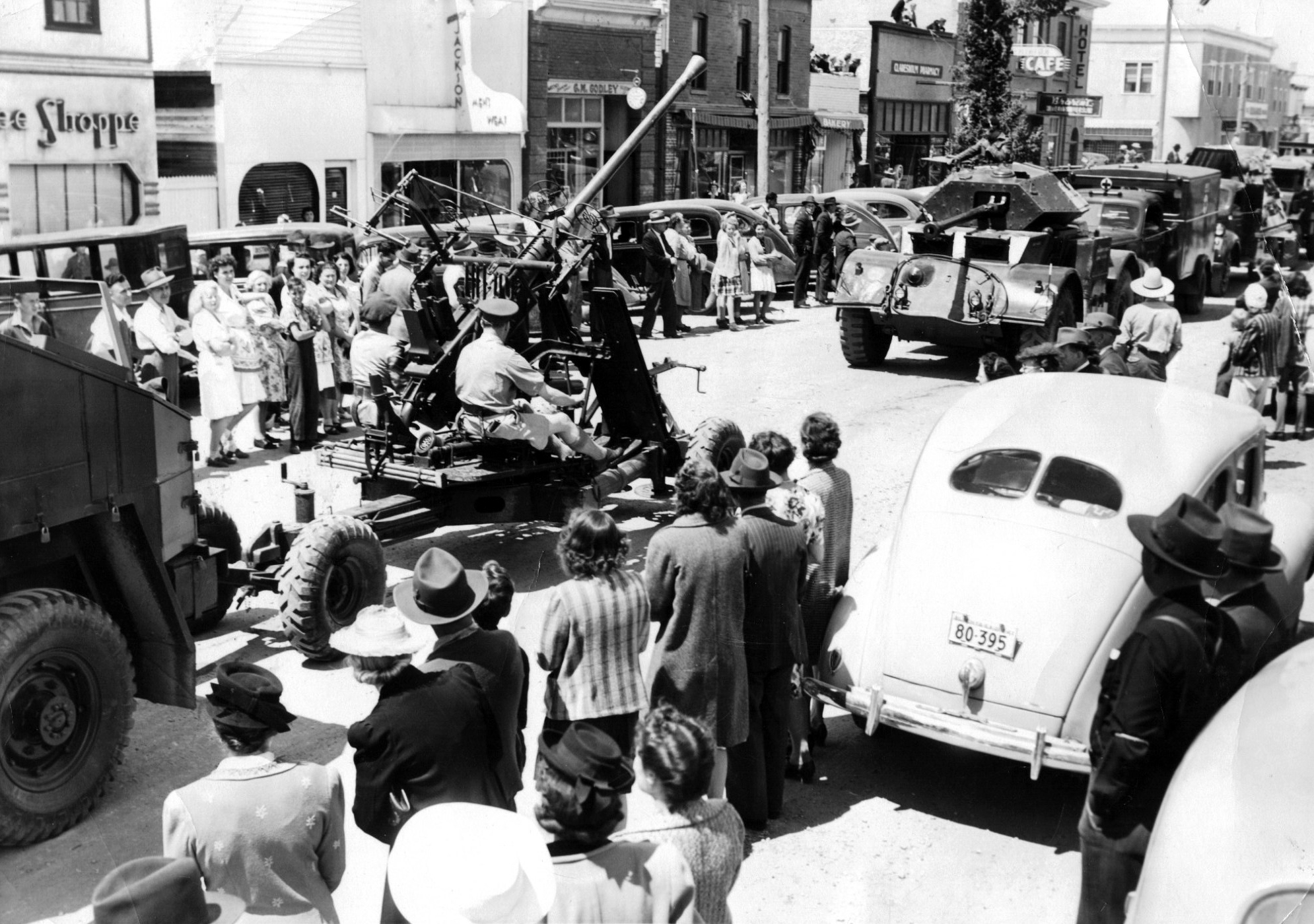 A military parade travels through the streets of Claresholm AB, 1942

The streets were alive with men and women in uniform. The skies buzzed night and day with yellow training planes – Avro Ansons and Cessna Cranes. 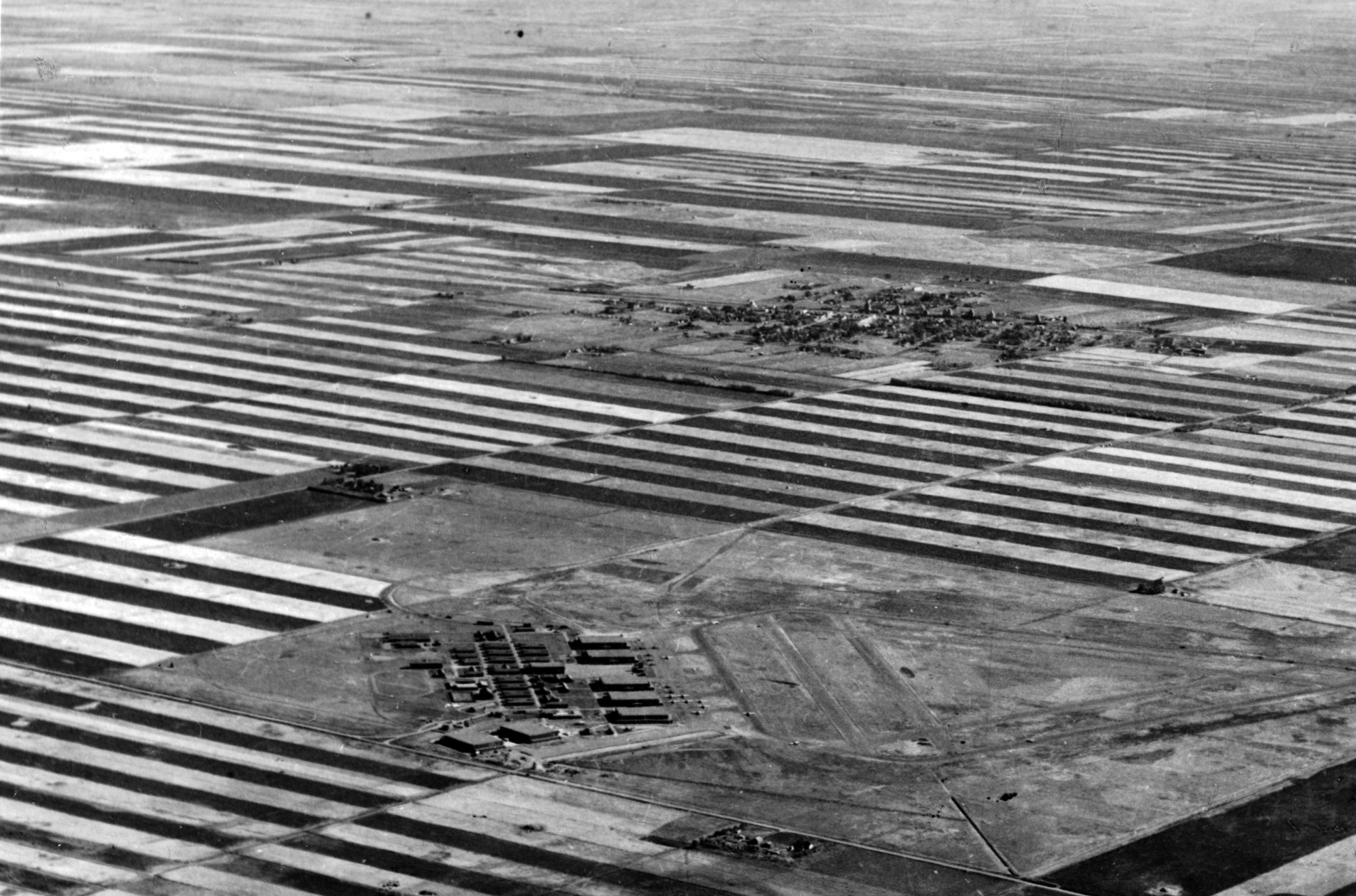 The No. 15 Service Flying Training School at Claresholm (foreground) in relation to the town – 1942.

The establishment of the airbase at Claresholm was also an economic boon to the town itself. From the outset, there were hundreds of men on the construction payroll, so money circulated freely.

By January 1942, the number of students at the airbase had grown to 150 and would continue to expand through the duration of the program.

By January 1944, there were over 1350 officers, instructors, airmen and women, and students on the base, with an additional 75 civilian staffers. At times, the population of the airbase reached over 2,100 people.

Additionally, the increase in the on-base population also created a demand for off-base housing, hotels, shops and services. This in turn created more construction in the town itself. 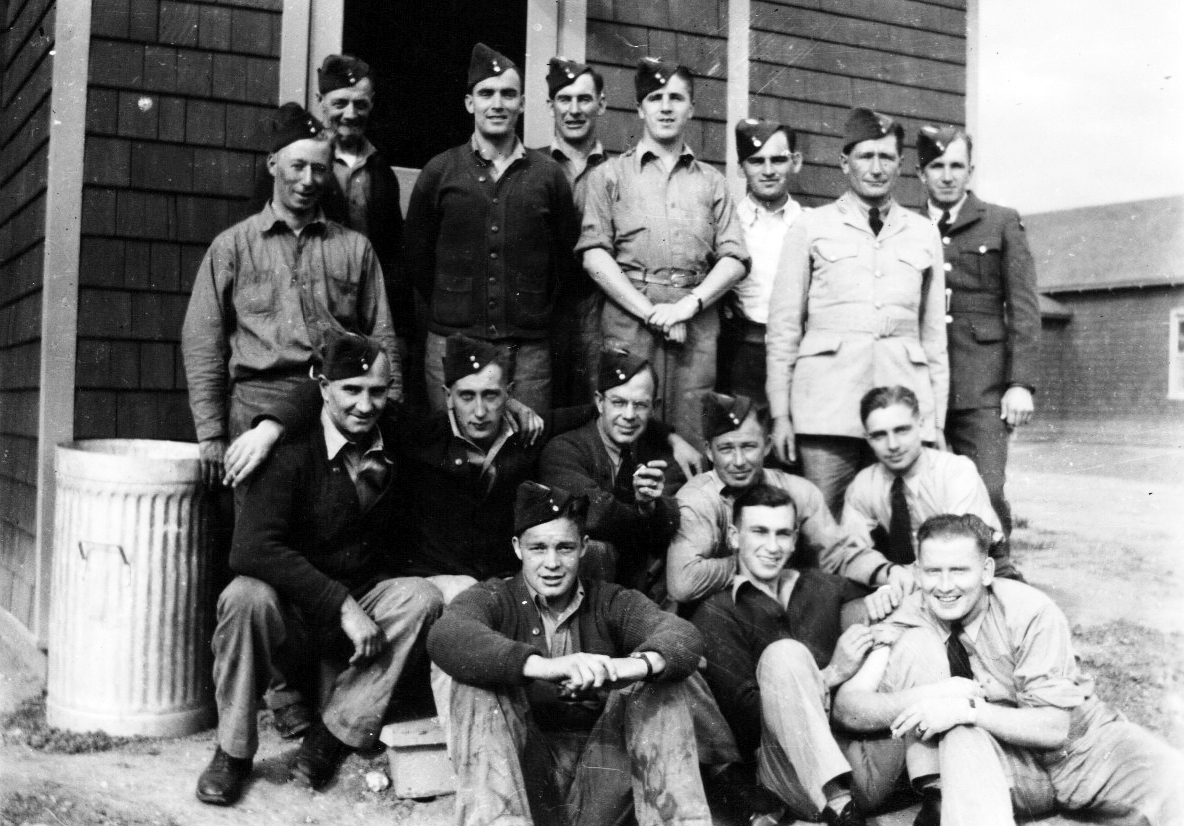 A mixed group of air and ground crew outside one of their “huts” on No. 15 SFTS.

The permanent staff at the school were held in high regard, and they were often made aware that their efforts were integral to the war effort.

Wing Commander Kennedy regularly reminded the graduating classes, “The staff of these schools are the main stay of our continued war effort in the air, and they deserve our full measure of recognition and praise for their efforts.” 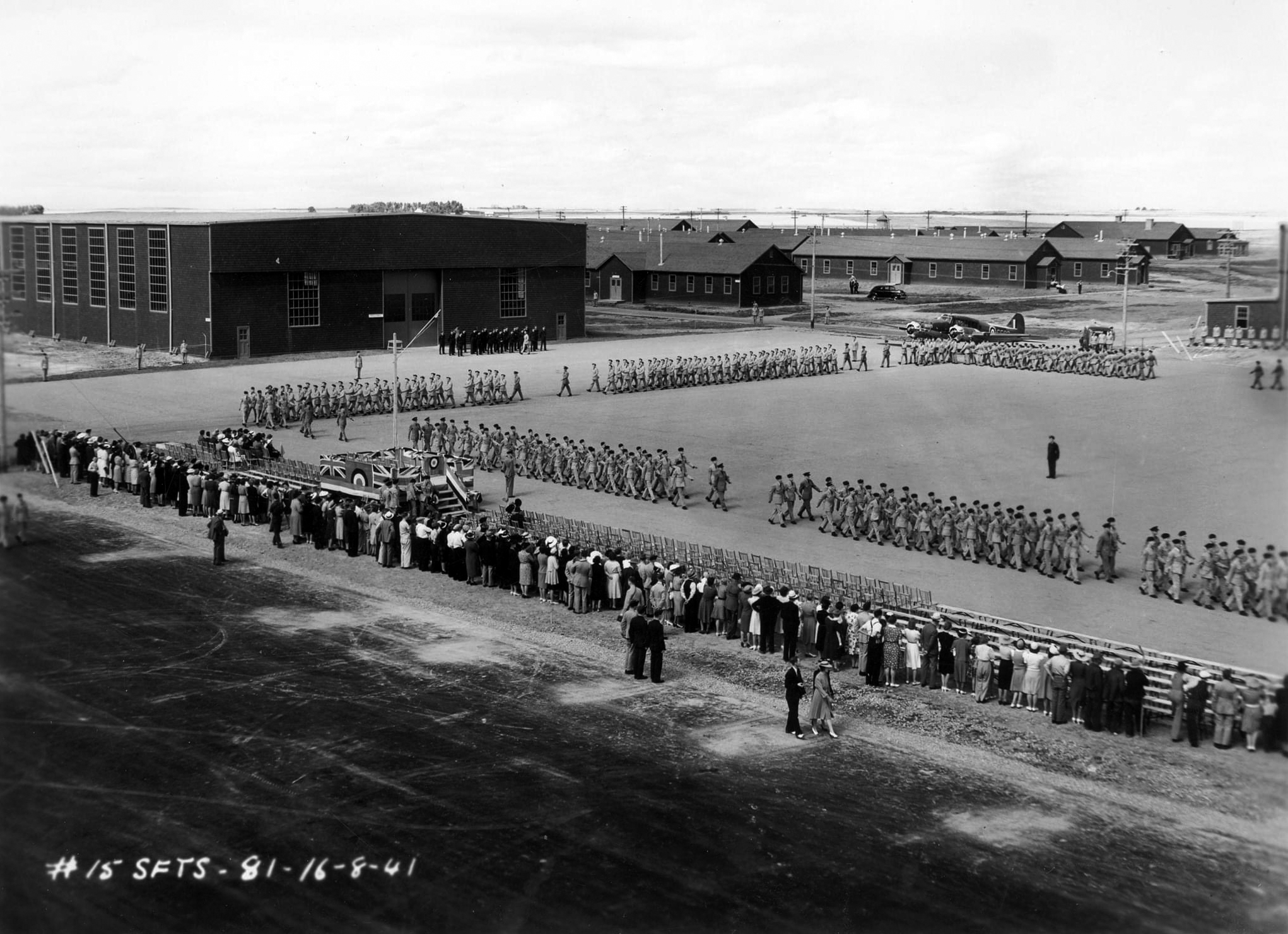 There were numerous social engagements at the airbase through the years, including many graduation parties, dances, picnics and other events where civilians and military personnel mixed and mingled.

According to “Windy Wings,” March 1945 issue:
“After the arrival of the WDs on the station, entertainment took on a new life. Dances, concert parties, and picnics were organized and successfully carried out. In truth, No. 15 became a pleasanter place to live. Gradually, as time passed, we (the men) became a part of it, and now it can be honestly said that a real comradeship exists between the boys and girls on our station.”

That comradeship extended to the surrounding community as well. Civilians, visitors and family members often made the trip to Claresholm to attend graduation ceremonies. On special occasions, such as a visit from the Royal family, business in the town was halted so the community could attend. 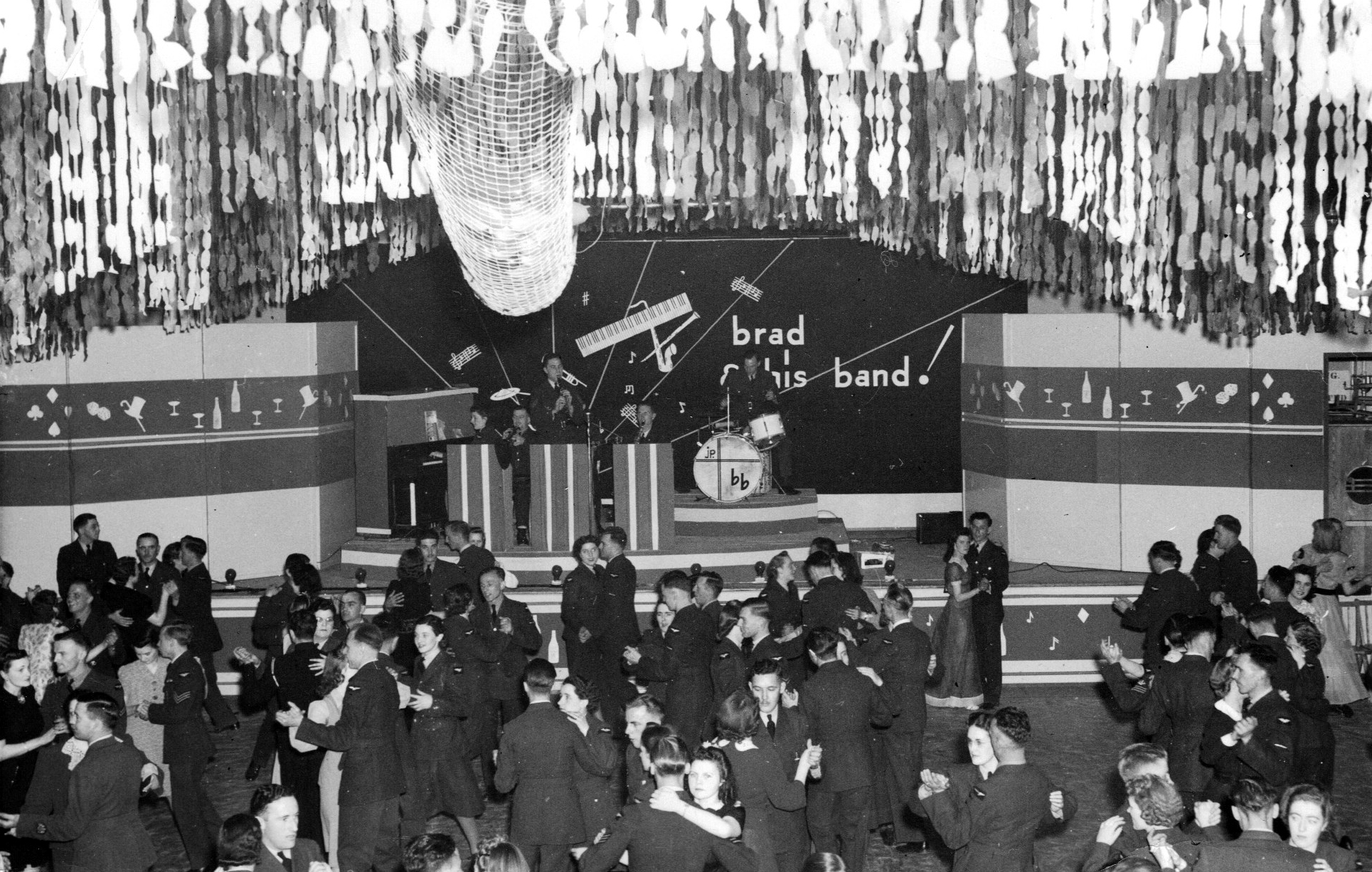 Dances were a regular occurrence at the Claresholm base, in town, and at other airbases around the region.

With so many young men and women far away from their homes abroad and across Canada, many romantic matches were made at No. 15 SFTS. The Women’s Division section of the “Windy Wings” monthly airbase publication regularly referred to new “sparklers” (engagement rings) adorning many of the young airwomen and nurses. 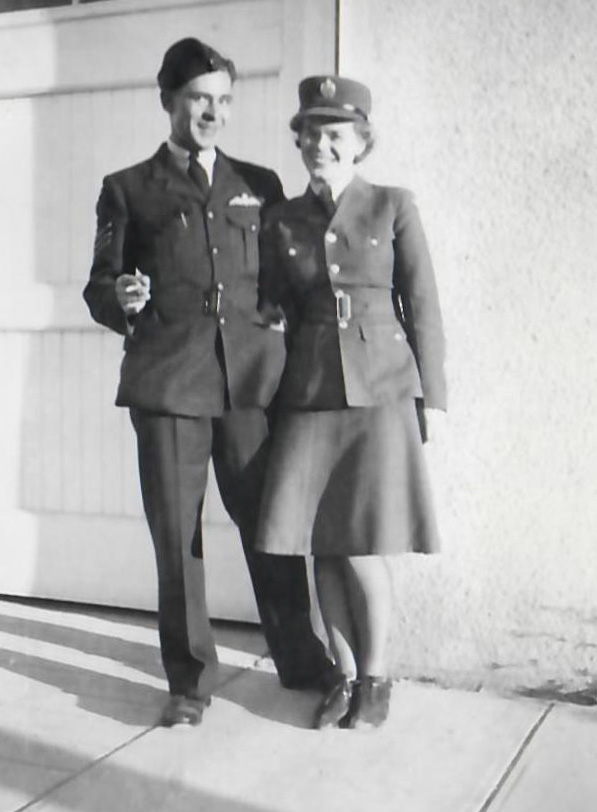 A young couple ready for one of many graduation ceremonies and celebrations.