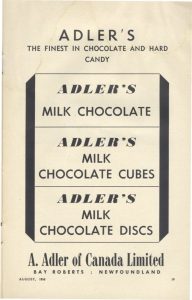 After Newfoundland joined Canada in 1949, Premier Joseph “Joey” Smallwood began a program of economic development across the island. As part of Joey Smallwood’s New Industries program, he convinced Adolf Adler, an English chocolate maker, to shut down his factory in England and move it to Bay Roberts. Following confederation with Canada in 1949, Smallwood’s motto was, “Develop or perish” and he pushed for economic development in the province through the establishment of new industrial plants. These plants included everything from a cement plant on the west coast to the Brigus knitting mill.

On April 21, 1955, Premier Joey Smallwood announced the establishment of Adler’s Chocolate Factory at Bay Roberts with the help of a government loan of $500,000.  In June 1955, the Daily News reported:

lt is understood that some 100 persons will be employed in the plant. Approximately 73 of these will be girls, who will be producing the lovely Rhapsody line of chocolates, sugar candies, chocolate covered nuts, biscuit bars and all other chocolate lines which Adlers formerly produced in their plant on Nile Street, London.

By the end of February 1956, the first commercial production of chocolate bars was underway, and by April the factory employed about 30 people, mostly women. The Newfoundland Journal of Commerce wrote a glowing review of the facility in 1958, noting:

… No doubt it is a shining example of how clean a food-manufacturing concern can be. The plant is geared to greater output than at present and can produce tons of chocolates and candy every week. All ingredients are mixed by machinery so that the human hand does not come in contact at any time with the product. The female help all wear smocks and head and hand coverings.

An article in The Newfoundland Quarterly titled, “New industries in Conception Bay,” published in March 1957, outlined:

Mainland visitors have recently commented how impressed they were with Adler’s chocolate bars and in fact were taking some back to their families. One visitor, according to the Sunday Herald, commented that “the chocolate in Adler’s ten cent bar was better than anything he had ever tasted, including Swiss chocolate,” which is supposed to be the best in the world. This is high praise for a locally manufactured product, and it would appear that Adler’s is off to a good start.

Known for its chocolate production, the factory also produced candy, and looked into the erection of a potato chip plant adjacent to the chocolate factory. In spite of claims of increasing chocolate sales, however, the future did not look so sweet for the company. Market problems combined with the loss of the factory roof in a freak storm resulted in its closure by the early 1960s.  The company owed $891,875.72 in a government guaranteed loan.

After the chocolate factory’s closure, the government attempted to sell the building. Several companies and organizations considered purchasing the building including a biscuit and candy maker, a pie filler and cake mix producer, and a school. Regrettably, the building caught fire on July 10, 1969 before it was sold and an insurance payout was received in 1970.

Margaret Sparks left high school to work at the Adler Chocolate Factory in 1958 at fifteen-years-old. Margaret always made sure she had a few pieces of chocolate in her pockets to take home at the end of the day. Her favorite candy at the factory was the “Nut King Bar.” 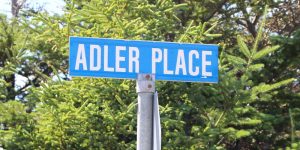