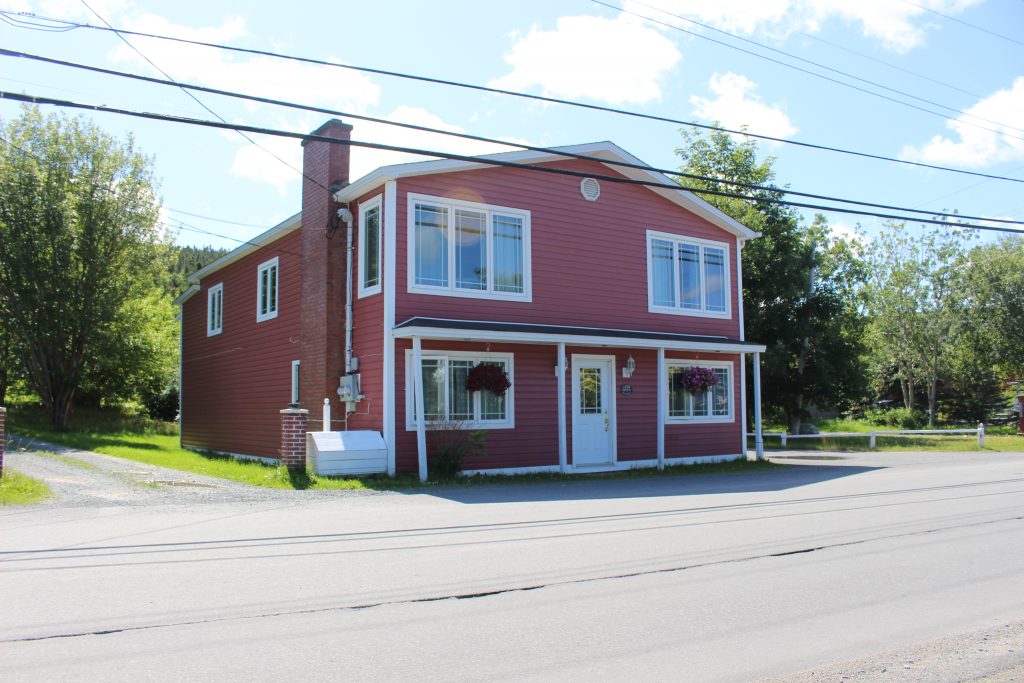 The building that formerly housed the Bert and Son’s Butcher Shop, 2019.

For a small community, there was no shortage of little shops and stores in Shearstown. In one tiny area near the Anglican Church, there were four general stores where, as locals say, you could buy anything from a needle to a clap of thunder. Most of the shops are gone today, but if you mention them, they still conjure up nostalgic memories for long-time residents: Bertram “Bert” and Bertha Dwyer’s butcher shop, Doc’s Store, Marjorie and Roy Saunders, Jim and Marcie Earle, Ned Holmes, and William “Bill” Saunders. Zippy Dwyer had a store, and Mary and Jesse Badcock had a store for a while as well.

Bertha Dwyer is remembered as a very warm and gracious lady, always wearing a smile. Marjorie and Roy Saunders had a jukebox and sold ice cream and chips; it was the spot where local children would often go for recess. Jess and Mary Badcock ran a confectionery store, another popular spot for candy-hungry children.

Local entrepreneur James Holmes set up a large shop about 200 feet further down the road from the church. It was a true general store, featuring everything from a post office to barrels of salt beef. As a teenager, Trudy Hutchings worked for a brief time in Jim Holmes’ store:

Berdina Cutler also grew up in the area. She remembers the credit system that some of the storekeepers used:

I got married in 1969, and they were in operation then. We lived with my parents for almost five years. I was teaching so you’d get paid once a month. You would go to these stores; we went to both, and you would purchase what you wanted, and when you got your cheque at the end of the month, you went down and paid the bill. Now obviously they couldn’t do that for everyone, but for people, say like Trudy’s parents, if they wanted to do it, or mine, or others who simply got paid once a month, we ran up a tab and paid it at the end of the month.

When I was a girl, we’d put in our order for what we wanted every Saturday, and my mother would send one of us down to the store to pick up meats. For example,  we would have neck meat for soup. I’ll never forget that because it made a really sweet soup, or a roast, not chicken because everyone raised their own, maybe some pork although we raised our own pigs too…. There was a great big walk-in freezer just when you went in the door, sawdust on the floor, and the little counter where he would get your meats and bring them out to you and wrap them in butcher paper, waxed on one side, and paper on the other.

Berdina recalls running errands to the Butcher Shop for her father:

Dad would say what cut of meat he wanted, and I remember it was always neck meat to make soup. And if you could get it now! It’s far better than what you buy as stewing beef, believe me! They had a slaughterhouse, and you’d get your meat fresh from his little store.  As a little girl I was going down on my bike one Saturday to pick up meat, and Jim Sam Dwyer had a great big ram, with great big curly horns. The ram came out of his yard and he hit me and knocked me off my bike! I came home and told Mom, I’m never going down there again. And I didn’t!

Trudy’s mother got her meat for Sunday dinner delivered right to her door by the Dwyers:

Well, the roasts used to be delivered here, again wrapped in butcher paper, but you got whatever Burt Dwyer decided you were going to get that week. They used to pay the beef bill, as Mom used to call it, once a month. I can remember Mom saying,  ‘Eight dollars! My, that’s too much money to be spending for beef!’ 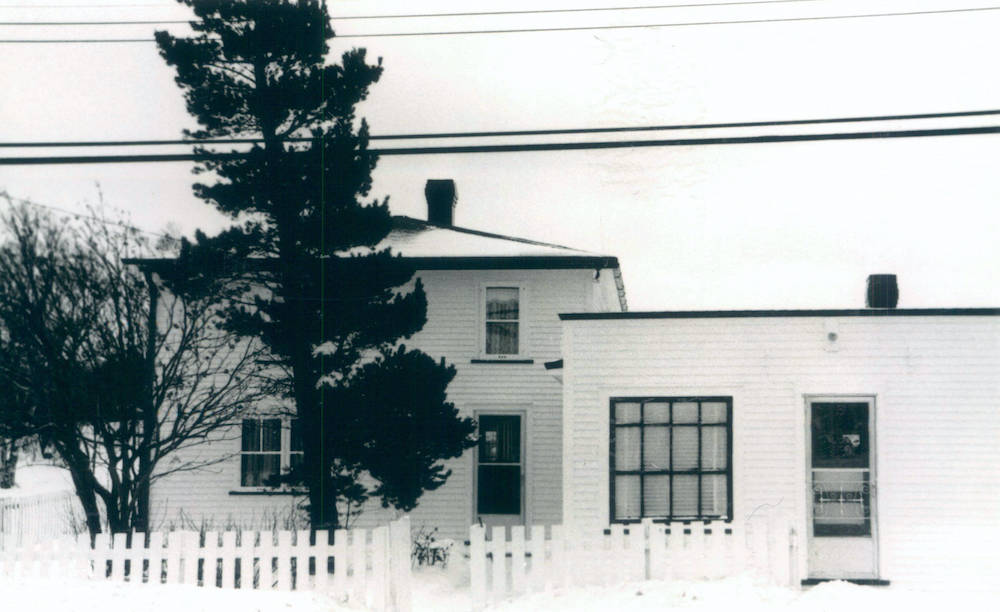 A photograph of Jessie Parsons house in Shearstown, with the store that operated from 1949 to 1985 on the right.

A little further up along the road, the Parsons family started a business in 1949, with George and Jessie Parsons as proprietors. George was a master carpenter, who had worked on the American military bases from 1940-1948 before returning home to set up a grocery store. Their daughter Della continued the business, moving across the street from the original store in 1985. If you drive through Shearstown today, the Parsons store is one of the few surviving shops from the heyday of Shearstown. You will have to stop in for yourself to see if they have a clap of thunder.