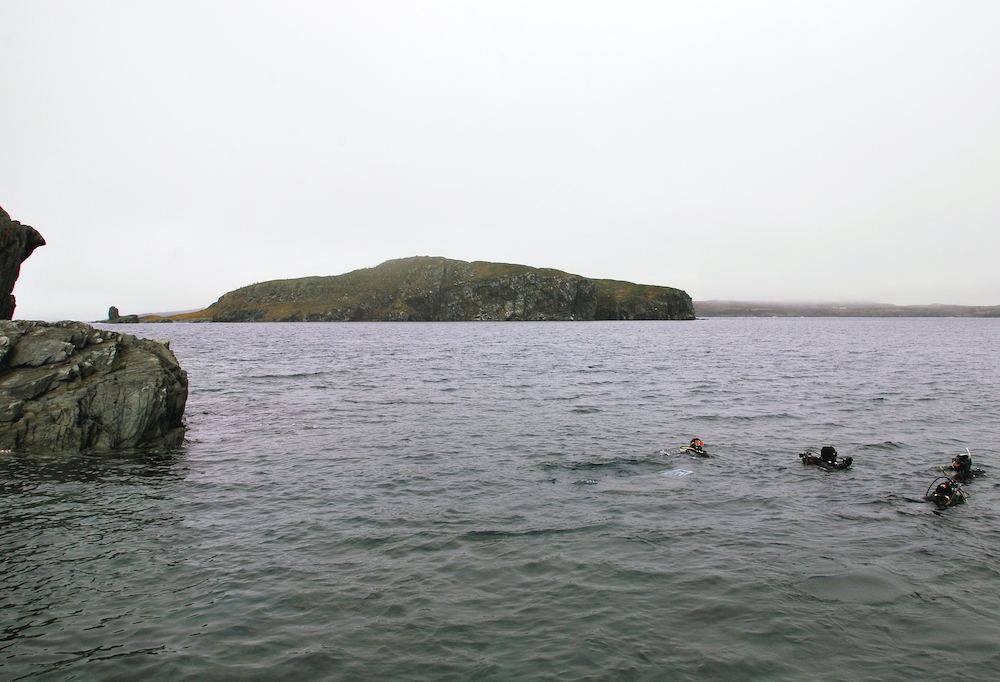 Divers with Big Island behind them, January 2011.

Big Island, located at the entrance to the harbour, protects Bay Roberts from ocean storms. It is perhaps best known today to tourists for forming the shape of a sleeping Newfoundland dog with paws outstretched when photographed from the right angle. Uninhabited today, Big Island once boasted several houses. In the 1990s, a gravesite was discovered on the island’s south side by the Heritage Society.

By 1560, Bay Roberts was used by Jersey fishermen, who called the area Robert’s Bay. They used a variety of places for their fishery, including Big Island. Later, the island was home to a number of residents and businesses. Settlers pastured their goats and other animals on the island, which protected the animals from predators and kept them from getting lost, as well as providing a source of meat for inhabitants.

The more recent name of Fergus Island comes from John Fergus, a native of Glasgow, Scotland, who opened a mercantile establishment in Bay Roberts in 1812. John Fergus, along with his daughter, Isabella, are buried in the old Wareham’s Lane Cemetery, Mercer’s Cove. Unlike any other grave in Bay Roberts, John and Isabella share an above-ground tomb, a reminder of their relative wealth in the community in the early 19th century. The Fergus tomb is a good example of what is known variously as a box tomb, slab tomb, box grave, or chest tomb. 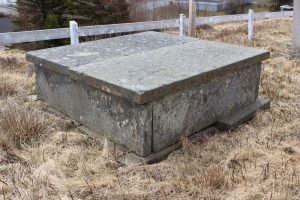 The tomb of John Fergus and his daughter Isabella, 2017.

A cairn of stones once marked the top of Big Island. In 1973, folklorist John Widdowson collected the following story about a Will o’ the Wisp, locally called a Jack ‘o Lantern or Jacky Lantern, spotted at the cairn:

When father was a boy his mother used to warn him of Jack o’ Lantern. Jack o’ Lantern was supposed to live on top of the American Man (the name given to the cairn on top of Big Island in Bay Roberts). The island was not visible from the house as the view was blocked by Big Head…. Jack o’ Lantern was of course marsh gas and was really visible. I have seen him. Father was scared and believed in the tale attached to what he saw. However he did not always obey when threatened. Grandmother would say, ‘There’s a light on Big Head; it’s after you.’ Jack o’ Lantern just appeared on Big Head. He then progressed down the harbour, being very noticeable over the bogs at Running Brook. He then went to the bogs in French’s Cove and from there crossed to his home on top of the American Man on Big Island.

In January 2007, writer Dennis Flynn interviewed Gwen Dawson about her memories of parties on the island. Gwen remembered:

We also had moonlight parties on Fergus Island. I suppose we were about 14 or 15, and my brother John would take us crowd of girls out in our motorboat lots of times and drop us off on the island. It was beautiful – full moon lighting up the water – and we would have bonfires and sing a few songs and [have] boil ups out there. He’d come back and pick us up after a few hours as we’d never stay overnight, but it was wonderful times.