Belle was renowned for being extremely sociable and an excellent host. News articles and social columns were written about the events she held and her participation in Calgary groups and societies. She is described in one of her obituaries as “Alberta’s most prominent hostess” who “entertained most of the city’s distinguished visitors. Her most illustrious guest was His Majesty King Edward VIII, then Prince of Wales, whom she had the honor of entertaining on three different occasions.”[1] 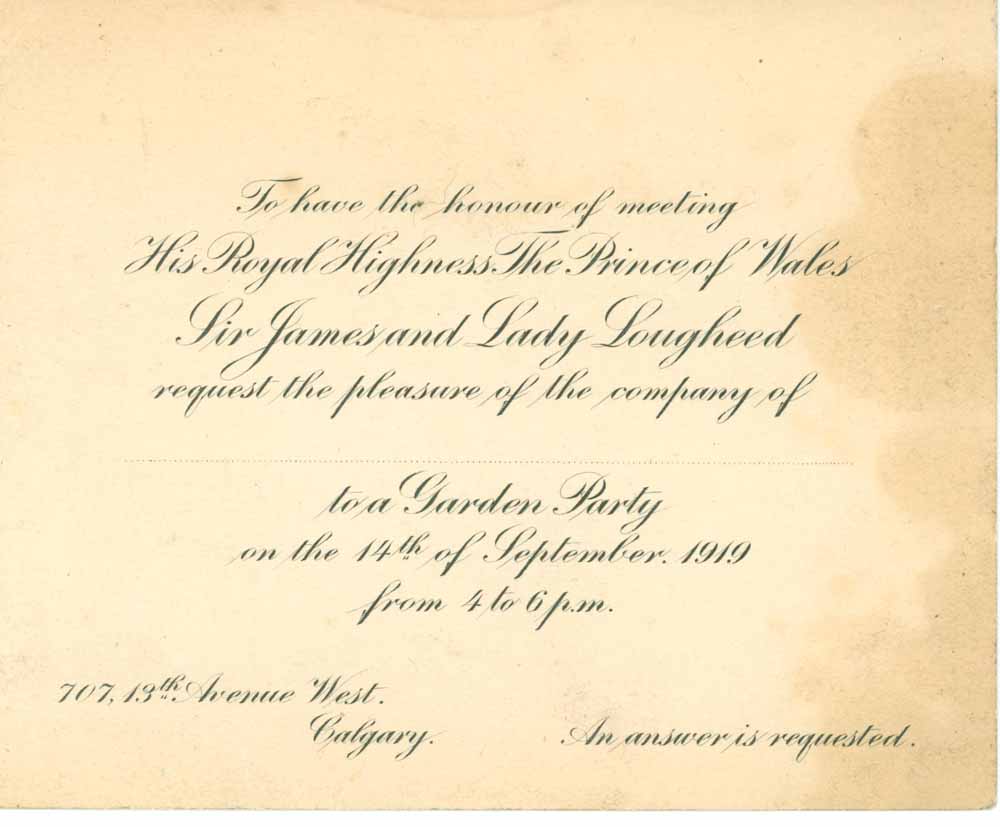 Invitation to a garden party with the Prince of Wales, 1919. Collection of LHCS. 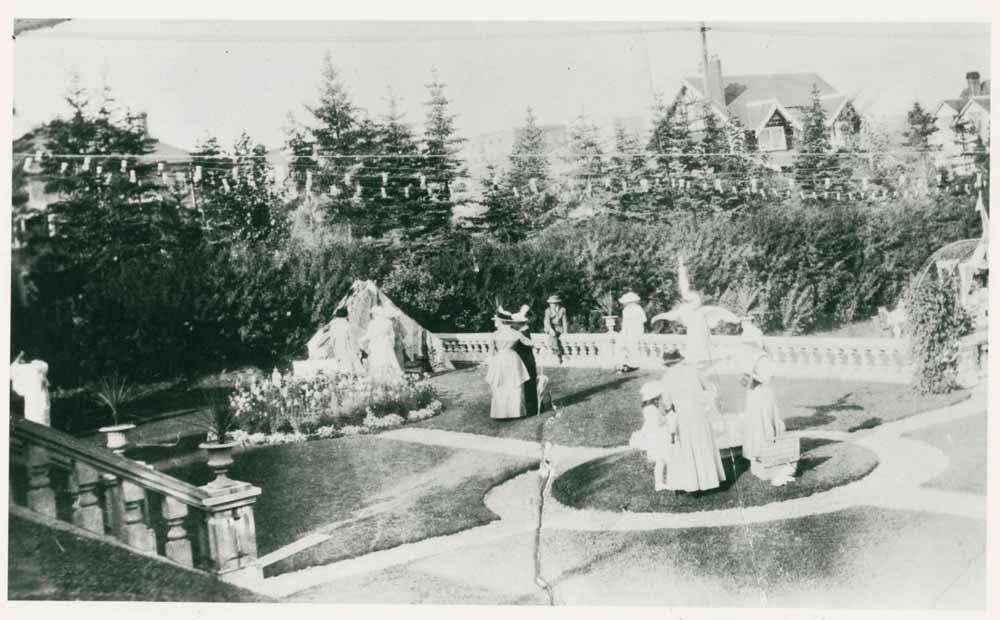 In 1916 when King George V knighted James for his contribution to the First World War, James became Sir Lougheed and Belle became Lady Lougheed. She received friends and guests affiliated with James’s political and business career at Beaulieu and at her cabin in Banff. She supported James’s political career by hosting and attending events in his absence, often accompanied by their son, Clarence, and she travelled with James on official visits in Canada and in Europe. A column in a Calgary paper cheekily alluded to one of her recent trips to Ottawa.

“Quite a loss has been temporarily sustained by the official social set at the Capital by the return to Calgary of Mrs. James A. Lougheed…who has been one of the most active and most popular official hostesses since the Borden Government came into power… It is but natural that she would desire to return to her western home as soon as her duties at Ottawa would allow.”[2] 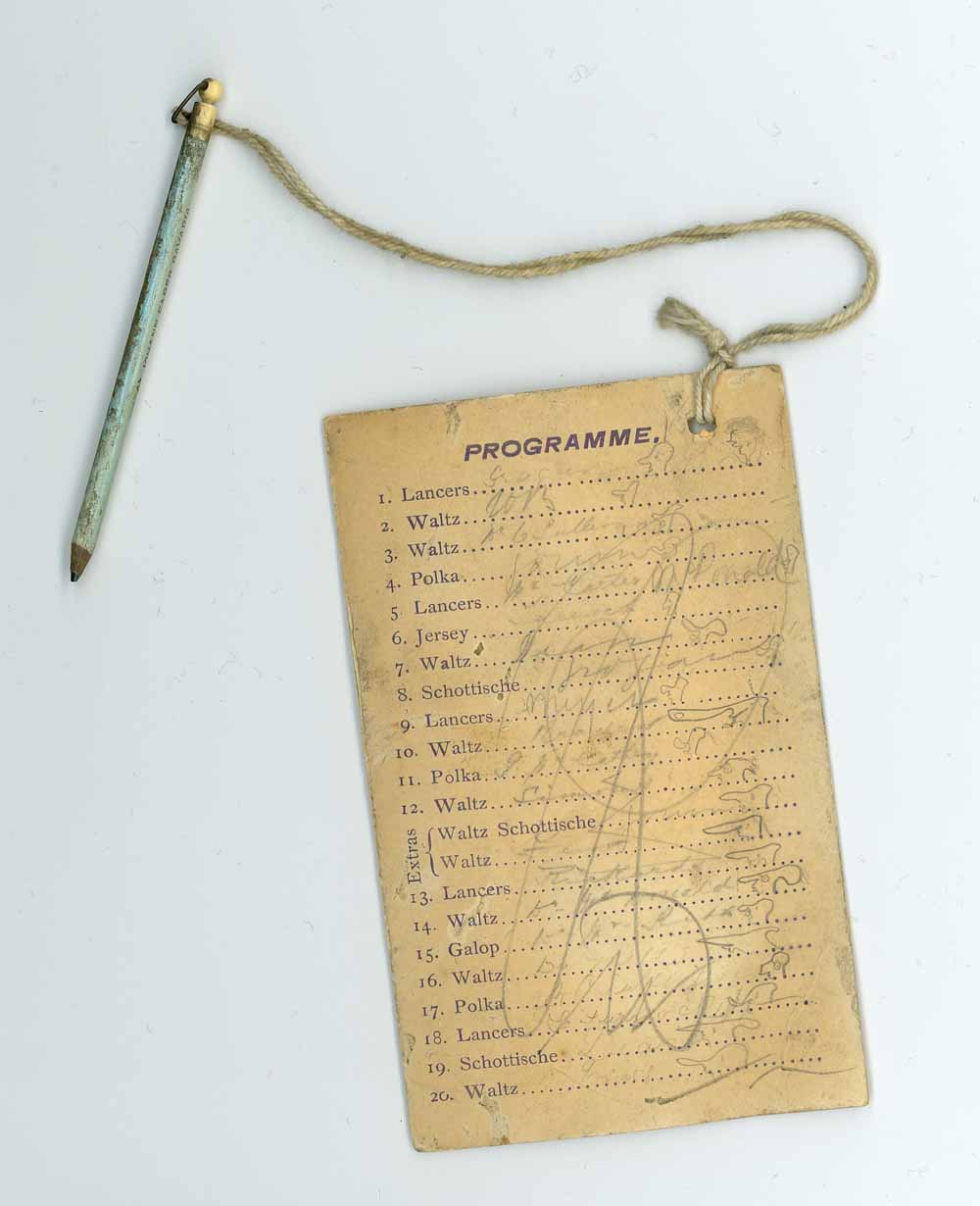 Her family spoke of Belle’s influence and her skill as a host generations later. Belle’s daughter-in-law, Mary Stringer Hardisty who was married to Norman, told stories to her own daughter-in-law, Flora Hardisty, who recounted that Belle was “definitely in charge” of her household.

“Mary talked about her, and about how strict she was. Mary knew a lot about entertaining—she learned it from Granny, who was an excellent hostess. There’s no doubt she was made of good stuff. I think she was the driving force behind James.”[3]

After James’s death in 1925, Belle maintained the friendships and connections she had made in their public life and continued to host important people. 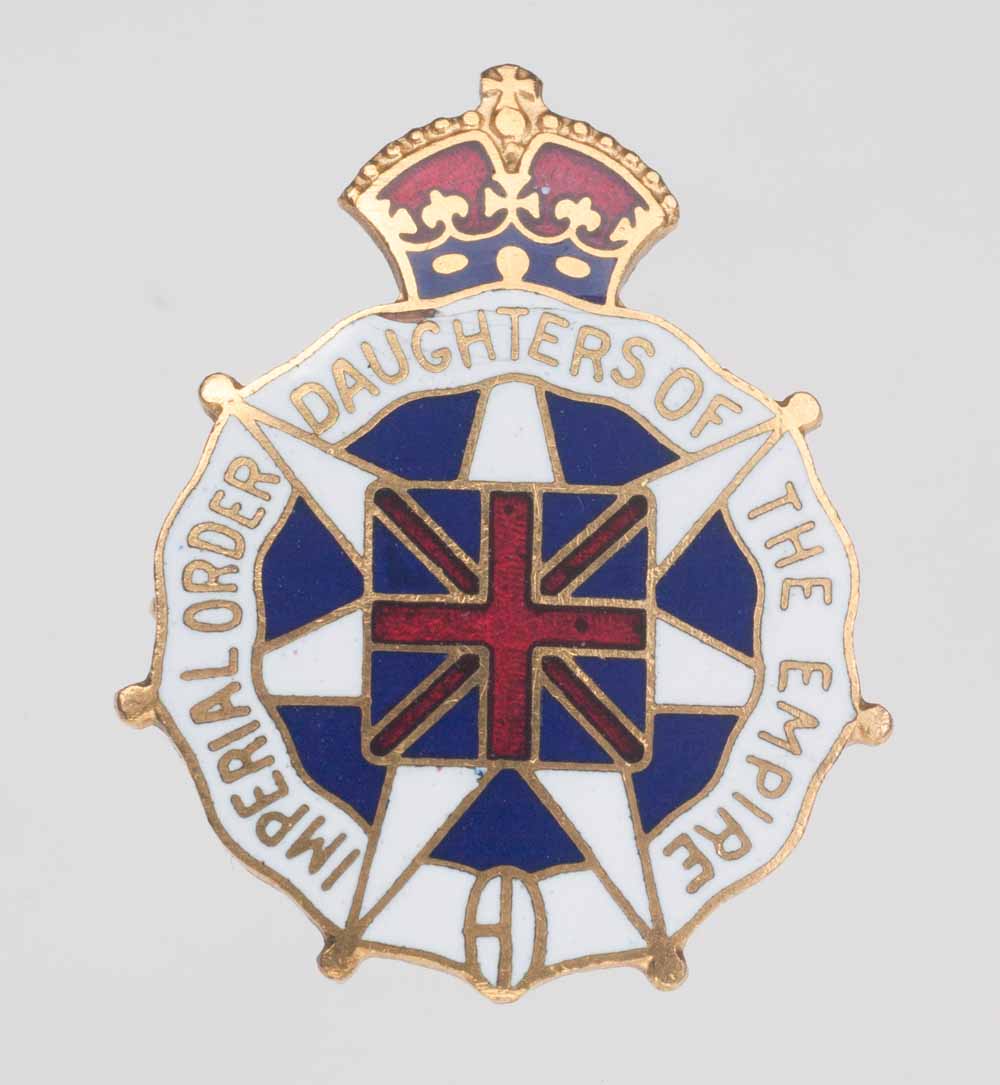 Imperial Order of the Daughters of the Empire, membership pin, 1954. Collection of LHCS.

Joe Lougheed speaks about Belle’s involvement in the community, with transcription.

Belle was active with a number of women’s organizations. In 1909 when a city bill was introduced which aimed to remove married women’s right to vote in municipal elections, Belle joined the Calgary women protesting it. She was active in the Imperial Order Daughters of the Empire, Victorian Order of Nurses, local and national councils of women, Methodist Ladies Aid, Calgary Children’s Aid Society and the Calgary Society of the Protection of Cats. She was also involved in establishing new organizations.

“Recently the pioneer women of Alberta organized a Women’s Old Timer and Pioneers’ Association. The main object of this is to gather and preserve all books, charts, reminiscences of the early life and early history of Alberta. Lady Lougheed, who graciously offered her beautiful home for the organization meeting, was chosen unanimously as the first president of this society, which is probably the only one of its kind in the world.”[4] 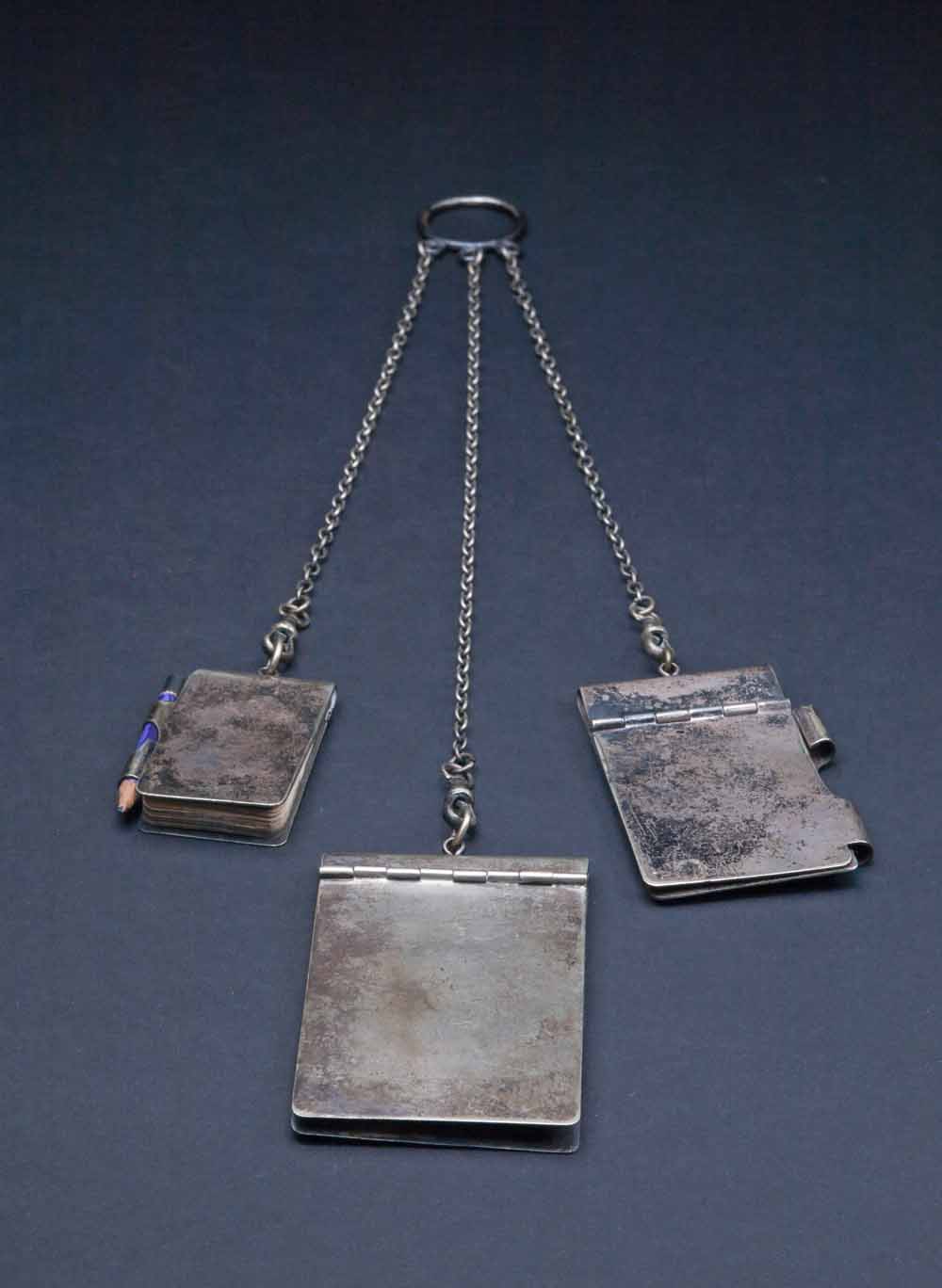 Belle was interested in the preservation of historical buildings. She was attached to the house she and James had lived in when they were first married and wished they had remodelled it and put it to good use after they moved to Beaulieu.

“[T]heir first house on Stephen Avenue…was the scene of many important historical events and of happiness peculiar to those early days.”[5]

Her views were recorded in a 1932 article in the Calgary Daily Herald.

“Lady Lougheed regretfully notes the demolition of landmarks and buildings that recall the beginnings of this city. Like many others she believes that a society for the preservation of these historical spots would be of great value.”[6] 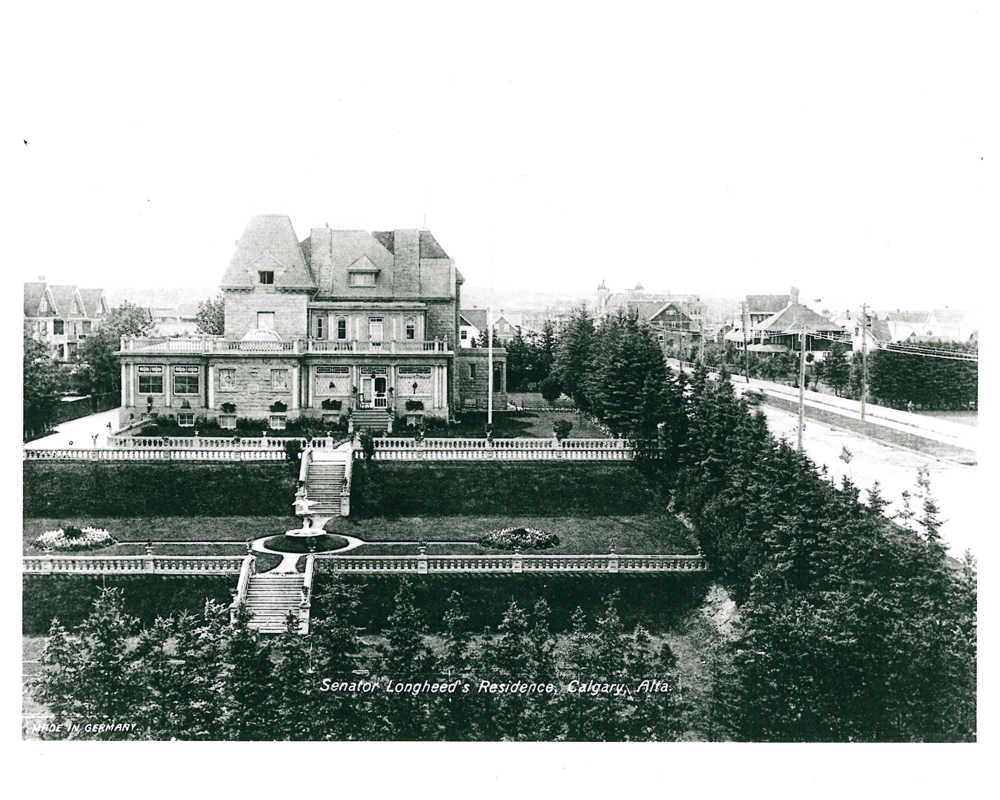