Belle was adventurous. She liked driving and was the first owner of a large car in Calgary. In 1913, the Albertan reported on her collection of automobiles.

“Mrs. Lougheed is very fond of motoring and one of her pet luxuries is her garage and her motor driven equipages. Her cars are probably the finest in the province.”[1] 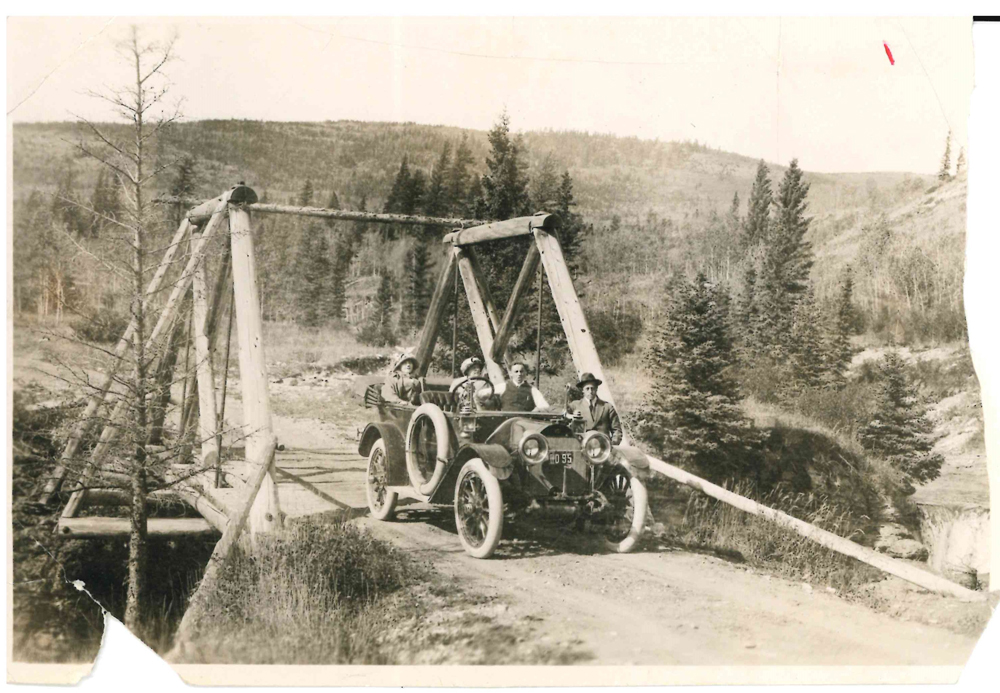 Car on bridge with members of the Lougheed family, c. early 1900s. Collection of LHCS.

The Lougheeds started visiting Banff in the early days of the national park which was established in 1887. James had been recruited as legal counsel for two railway men who supposedly discovered the hot springs and wanted to lay claim to them. The case was unsuccessful because the government declared the area a reserve but during this time, Belle became a regular visitor. The Lougheeds had a cabin built near the site of the Banff Springs Hotel.

Curiously, title to the cabin is listed in Belle’s name only. The assessment roll for the Banff National Park School of 1910 lists her as the sole owner of lots 10, 13, 14, 15 and 16. The reason for this is unclear especially considering James willed his estate to his sons even though it was acceptable at the time to leave property to one’s widow. Belle may have bought the property herself with her inheritance from her father.[2] 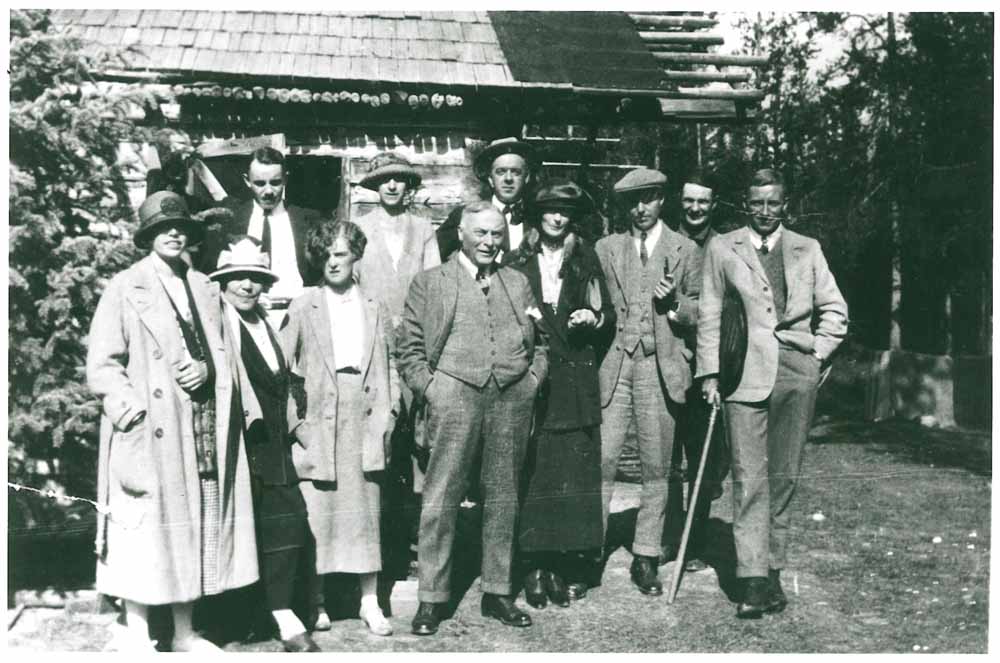 More than once, Belle’s penchant for driving got her into trouble while taking trips to Banff.

One of her excursions is recounted in several stories. One author says Belle ignored her husband’s admonition not to drive to Banff while he was away, yet she and her party set out at a roaring speed of twenty kilometres per hour anyway. The following excerpt is from an article from 1962.

“It was thrilling in those days to venture out in a car. The Lougheed family purchased their first automobile, a chain-driven Pope Toledo, in 1909… When someone in the family suggested a drive to Banff Sir James put his foot down calling it foolhardy… ‘The impulse of a bunch of kids and poor old granny!’ A short time later his duties took him to Ottawa for the Senate, and with the main opposition gone, the family declared the trip was on.”[3] 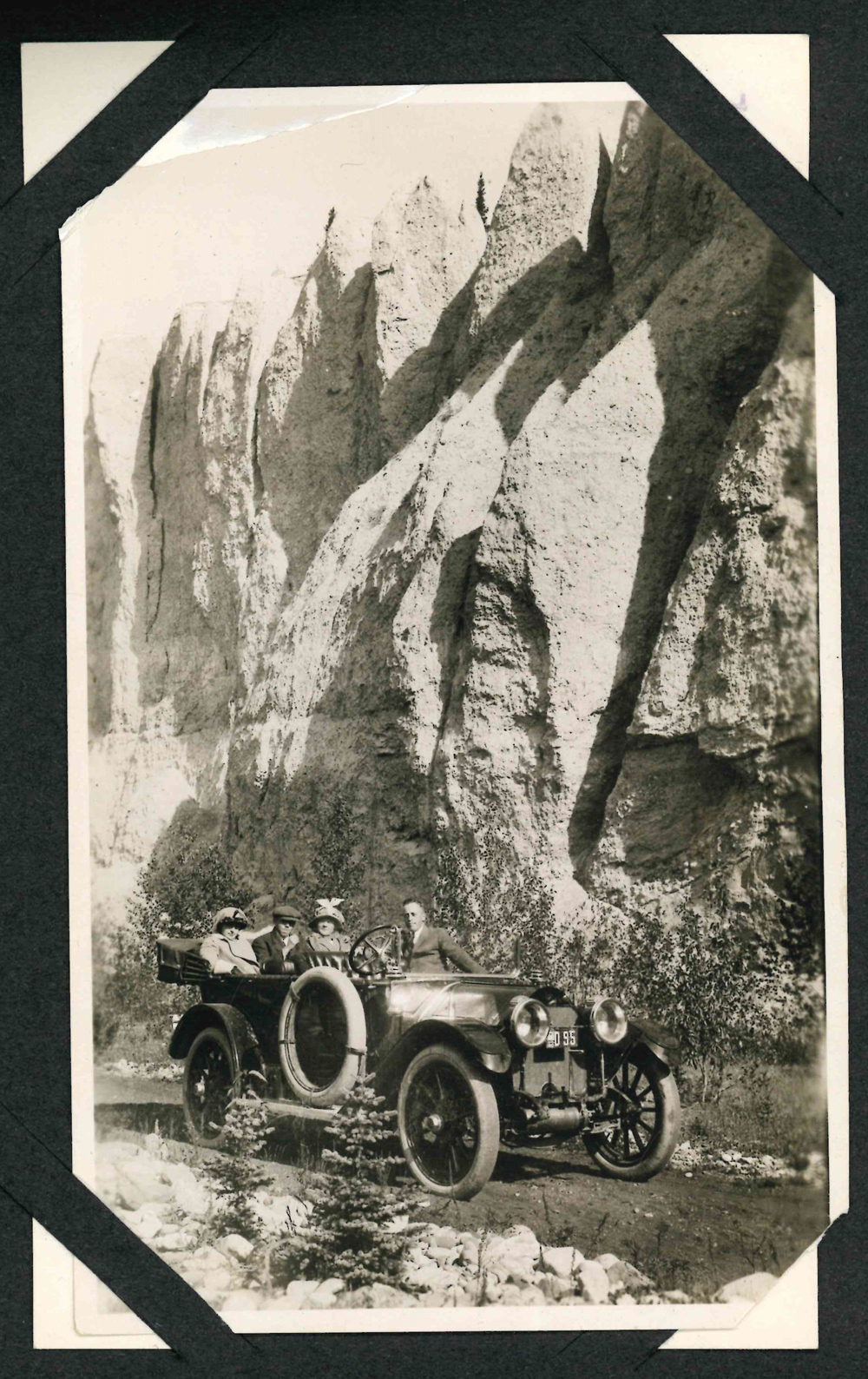 There were delays and mishaps along the way including a picnic bombarded by mosquitoes and a bear sow and cubs crossing the travellers’ path. To complicate things, it was illegal to take a car into the park at the time, so Belle’s vehicle was impounded as soon as they arrived. The adventurers were undeterred and continued on their way taking in sights and going canoeing and horseback-riding. The authorities agreed to return the car to them when they were ready to leave on the condition they would depart immediately.

Their trip home was also full of adventure. At one point, just past Kananaskis, they blew a tire and had to walk all the way back to Kananaskis to catch a train to Calgary. A few days later, rail workers loaded the ruined Pope-Toledo onto a train car and sent it back to Calgary where it was left beside the main track. When James arrived at the train station on his return from Ottawa, he was surprised to see the prized vehicle damaged and sitting at the side of the track. The family admitted they had undertaken the adventure against his wishes but Belle smoothed things over and the story was often retold. But that was not the only run-in with the law Belle had in Banff.

“By the late 1912 season, Senator Lougheed had become acutely aware of the current restrictive automobile regulations. Ironically, the sole traffic infraction the Dominion Parks Branch recorded in 1912 was the senator’s own wife. Apparently unaware of the regulations, Mrs. Lougheed ‘had the auto driven to the golf links’ as ‘she was under the impression that the Upper Hot Springs and Cave and Basin were the only road restrictions.’”[4] 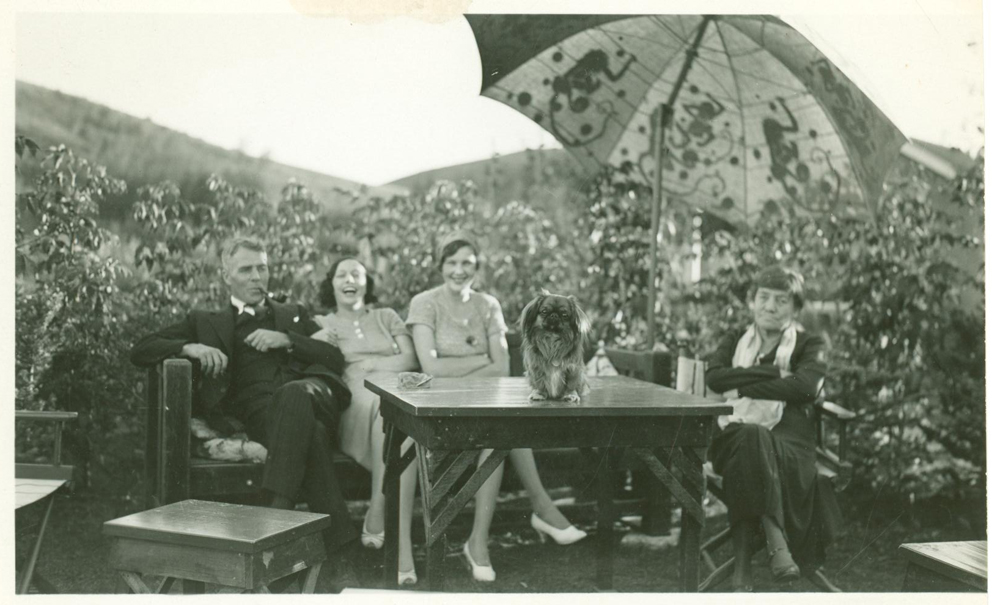 Belle Lougheed with friends and small dog in Banff, c.1920/30s. Collection of LHCS. 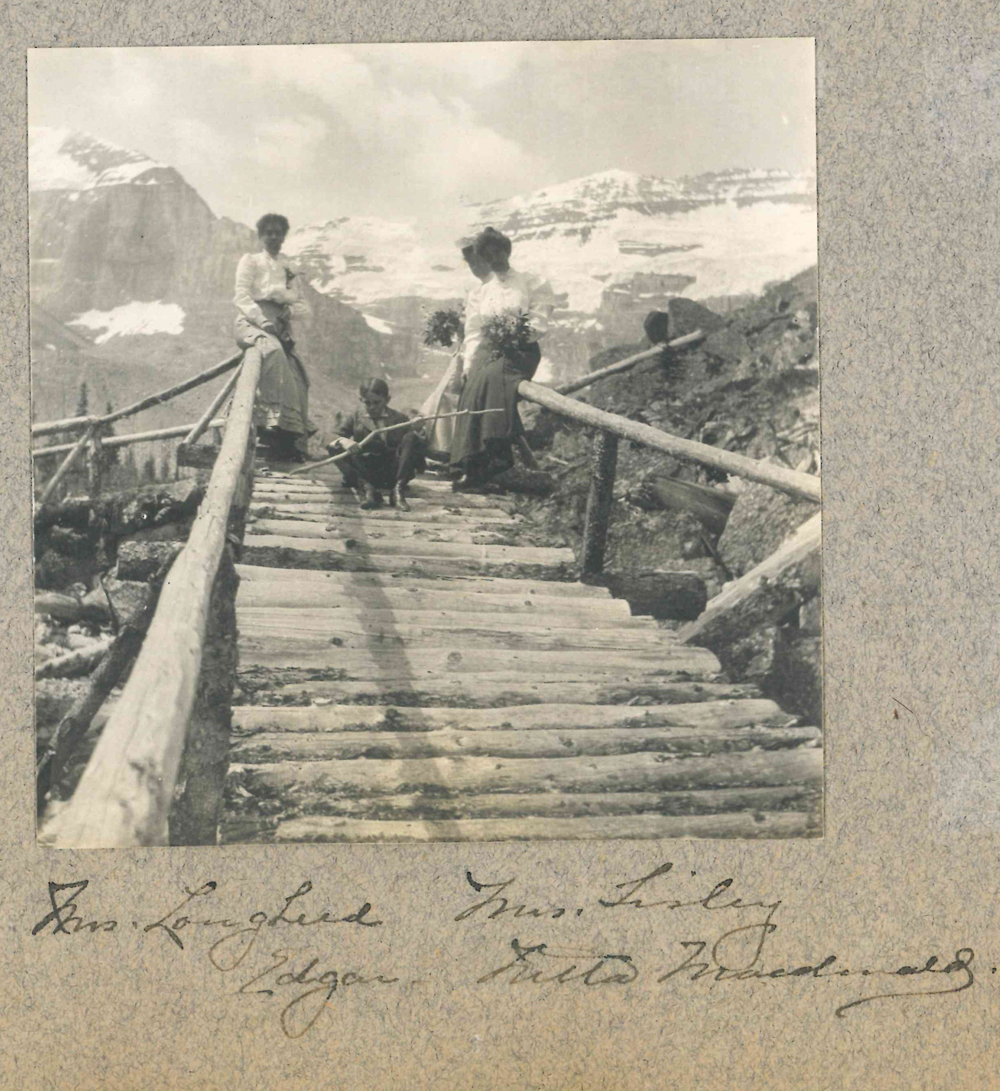 Belle was a lover of animals and active in the Calgary Society of the Protection of Cats. There are several pictures of pets among her family photos with notes on the backs written in Belle’s hand. When her son, Edgar, and daughter-in-law, Edna, had their second child, Peter, who would later become premier of Alberta, Belle exclaimed, “You’ve named the boy after my cat who is also called Peter.”[5] 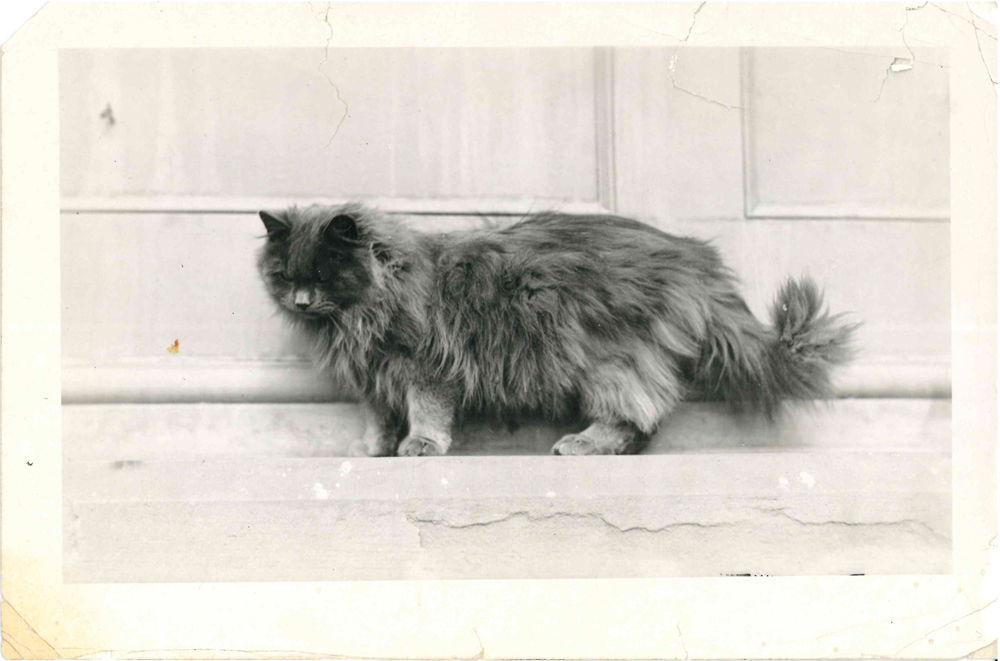 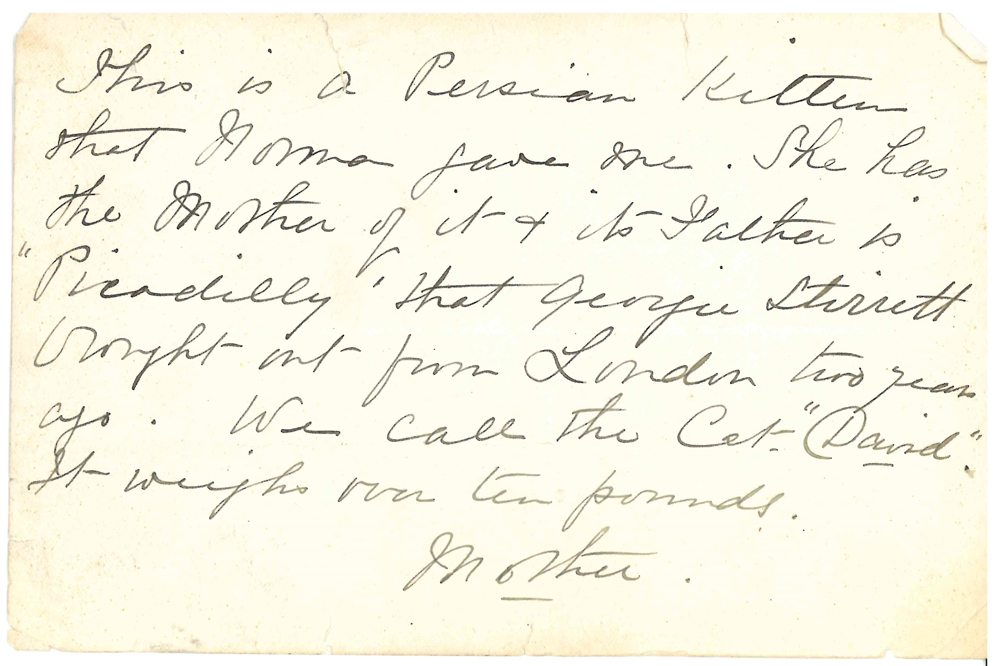 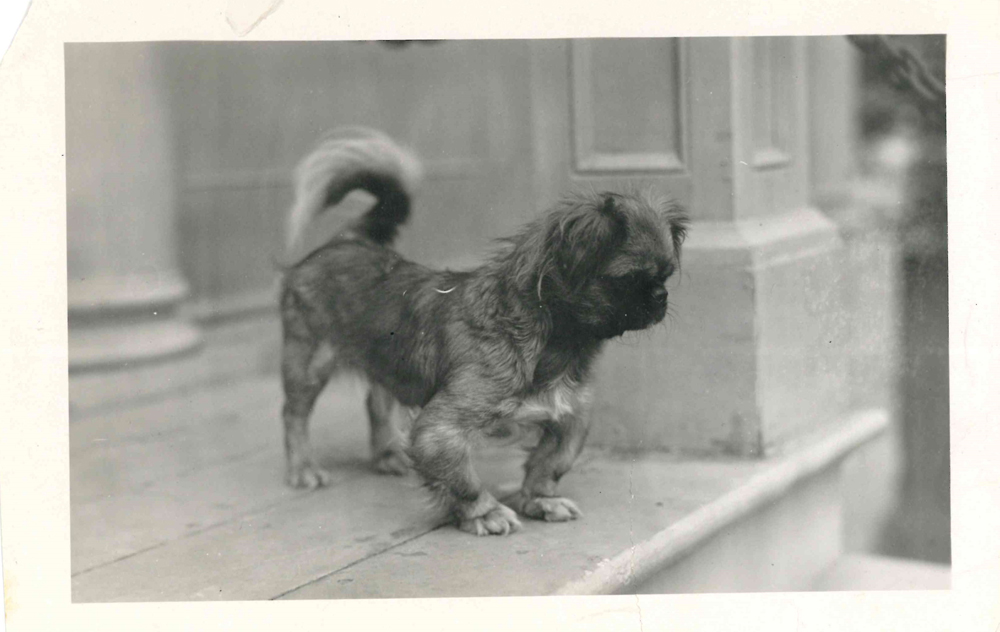 Belle was revered as one of the few people in Calgary who could dance the Red River jig.

“Forty years ago almost everyone in the West could do the Red River Jig. No social gathering was complete without it…all the people in the country, natives and whites would gather at the Hudson Bay forts… For several years past Calgary old timers have been scouring the country around to find someone who could dance it [and] for a time it looked hopeless. The only folk dance of the west seemed to have vanished. Lady Lougheed could do the women’s steps but knew of no one who could dance the steps of the men.”[6]

Getting to know Belle in hindsight is a worthwhile exercise but it leaves people wishing for more. One researcher expressed the situation plainly.

“It is frustrating to have so little to go on when [Belle’s] life was so public and full. We know she wrote tons of letters [but] where did they go?”[7]

(based on memories relayed by Mrs. Norman Lougheed, Mary Stringer)