Despite the many contributions they made during the fur trade and in the formation of Canada, discrimination against the Métis was rampant in the late 1800s. They were denied rights, ignored by government and discouraged from exploring their heritage. Many Métis were forced to dissociate themselves from other Métis in order to survive the harsh and often violent treatment they received at the hands of government as well as individuals. The Hardistys were among those whose indigeneity was made invisible. Belle, her parents, her siblings and aunts and uncles never publicly referred to themselves as Métis except to obtain land through scrip.

Initially, the Métis were people born of one non-Indigenous, usually French, Scottish, Irish or English parent and one Indigenous parent with the father most often being the non-Indigenous and the mother, the Indigenous. European fur-traders relied for their survival on the skills and knowledge, especially knowledge of the land, which Indigenous women possessed. Over time, the Métis people began to develop their own distinct language and culture.

Even though it was derogatory, “half-breed” was the phrase commonly used at the time by non-Indigenous people to describe those of mixed European and Indigenous descent in conversation and in legal dialogue. Despite her silence regarding her indigeneity, Belle was often referred to this way. Chief Buffalo Child Long Lance wrote about her in 1924.

“Some of Canada’s best citizens are of Scotch and Indian descent. Lady Lougheed…is a half-breed.”[1]

The Manitoba Act of 1870 and later, the Dominion Lands Act of 1872, sought to address the Métis people’s concerns about land rights and political representation through federally issued certificates known as “scrip.” Scrip was used as a means to extinguish the aboriginal title of the Métis by awarding individuals certificates which could be redeemed for allotments of land. The certificates were made out for 160 acres or 240 acres depending on the age and status of the applicant.

However, unlike the Indian treaties of the northwest, scrip policy did not secure or protect Métis land. Scrip could be sold to anyone and scrip speculators often bought it for a fraction of its value. Scrip did not guarantee land rights and did not address the economic concerns of Métis people or the transitions they were going through such as adapting to a European agriculturalist society and the loss of bison on the prairies. And much of the land offered to the Métis through scrip was in the southern portion of the western provinces so people in the northern regions had to travel hundreds of miles from their communities to redeem their allotments. 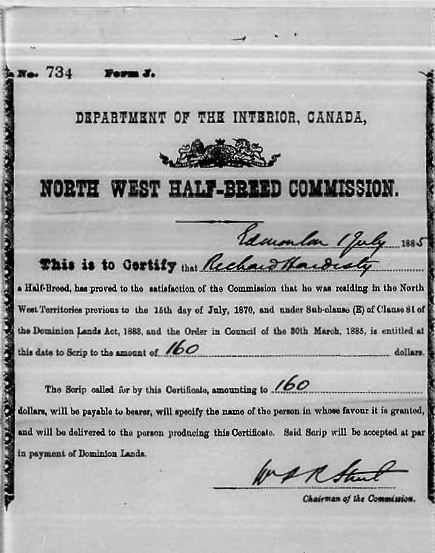 Belle’s uncle, Richard Charles Hardisty, successfully applied for scrip in 1885 and in 1901, Belle’s mother, Mary Anne Allen Hardisty Thomas, received scrip. Mary Anne also received scrip for her son, Dick, who had died in the Battle of Batoche.[2] Richard Charles likely used his scrip as a means to amass land and compound his fortune whereas Mary Anne, who fell into poverty in her later years, likely relied on her scrip or the money she would receive from selling it to survive.

Two months after the Battle of Batoche and the surrender of Louis Riel, Prime Minister Macdonald delivered a definitive statement on the topic of indigeneity in the House of Commons.

“If they are Indians, they go with the tribe; if they are half-breeds they are whites, and they stand in exactly the same relation to the Hudson Bay Company and Canada as if they were altogether white.”[3]

In this speech, Macdonald’s exclusion of Indigenous peoples and his dismissal of the wrongs done to the Métis set the tone for how people would negotiate their identities in the aftermath of the rebellion. Like many other Métis, Belle and her family dissociated from their indigeneity in order to survive in a country that was apathetic to and inconsiderate of the Métis people and their tribulations.