“Flowers and flowering shrubs have always occupied an important place in the decor of the cemetery grounds. For generations, it was a way for us to bring comfort to the families visiting their loved ones.” –Brian Treggett

Flowers honouring the dead are a visual expression of love, sympathy, and respect. They become a means of lending support. The lumber merchants and shipbuilders often planted flowers and shrubs on their lots similar to what they had on their estates.

Flowers help the grieving families feel at ease and more at home, so the flowerbeds were strategically placed at the entrance and in the middle of the cemetery.

William Treggett created circular flower beds in different areas of the cemetery.  The greenhouses had a wide variety of flowers so that he could change the arrangement every season. Greenhouses became an instrumental part of the development of the Garden Cemetery.

“My grandfather, William, was a remarkable person who loved teaching others about horticulture, such as the botanical names of many of the bedding and ornamental plants. He was also skilled at grafting shrubs and trees.”– Graham Treggett

The two greenhouses at the cemetery appear to have been constructed around 1867. William Treggett was involved in setting up the two buildings and getting the business started.

To acquire different varieties, it was not unusual to exchange plants between neighbours. There was excellent cooperation amongst the community.

“ I learned a lot about different plants from my father’s vast knowledge, which he, in turn, had acquired from his father before him. Horticultural knowledge was passed down from father to son in our family. I would often volunteer to water the flowers and do odd jobs around the greenhouse. The greenhouses were always hot, and the high humidity felt terrific in the cold of the Quebec winters. 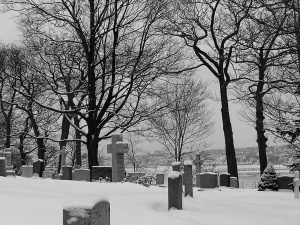 When I was little, playing in the greenhouse was a treat. I would often run and play hide-n-seek there with my siblings. In the potting shed, I would play with my toy trucks in the sandbox. We even grew Vine Tomatoes that sometimes I would pluck off and eat.

During the winter months, my father would spend countless hours shovelling coal into the furnace in the cellar of the potting shed. Keeping the greenhouses warm was a constant worry, and heating with coal could be very dangerous as gases could build up and explode. A bell would ring in the lodge if the temperature in the greenhouse dropped below a certain degree.” – Brian Treggett