The barn was destroyed by fire in 1964 when a cemetery employee, Mr. Leo Fountain, was re-fuelling the garden tractor, and it caught fire.

At the time of the fire, Brian Treggett was his mother’s assistant. He was working with the employees in the lower part of the cemetery. All of a sudden, they noticed some black smoke in the sky and rushed up to investigate.

Upon arrival, Brian discovered the barn was engulfed in flames. He immediately ran to the fire station nearby to alert the firemen. They rushed over, but they were unable to save the barn. Luckily, no one was injured. 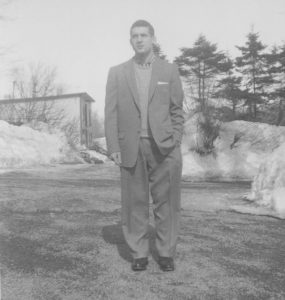 “This barn had been almost a second home for my family for four generations, and it was such an essential part of our daily lives. My great-grandfather, grandfather, father and I had spent so much time in that building, and now it was gone. This barn was a meeting place for my family and friends for over 100 years.” -Brian Treggett 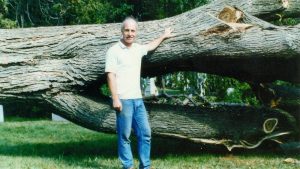 Brian with a trunk of an Elm Tree, Mount Hermon Cemetery, Quebec, c. 1992

The cemetery used to be densely populated with beautiful Elm trees. But in 1992, a large number of mature elm trees had to be cut down due to Dutch Elm disease.  They were able to save some trees by spraying them with a preventive fungicide, and by injecting the root systems with a unique solution to protect them from infection. Also, a group of volunteers was organized to plant Elderberry bushes around the root system.

Brian and workers with the trees that were taken down, Mount Hermon Cemetery, Quebec, c. 1992

However, despite all efforts, in 1992, the forestry department of the Quebec Government notified the cemetery that all the affected trees must cut down immediately. All the wood had to be either incinerated or buried under several feet of soil.

Tools of the Trade Final Thoughts