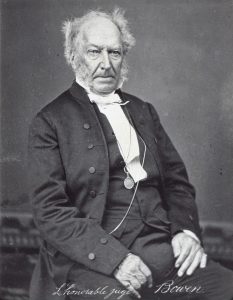 The original owner of the property was Le Séminaire du Québec, an educational institution in Quebec City. The property was sold in 1831 to Judge Edward Bowen.  He was obliged to construct a house on the property within a year.  This was to ensure the proper upkeep of the grounds and he paid an annual seigneurial tax.

Judge Bowen was born in Kinsale (Republic of Ireland) in 1780 and came to Lower Canada in 1797. He studied law in Quebec City in the offices of Jonathan Sewell and John Caldwell and was authorized to practice law in 1803.  He soon became a successful politician, lawyer and Judge of the Court of King’s Bench at Quebec at age 39.

The sale by Edward Bowen

In the same year, the cemetery directors hired William Ware, a Provincial Land Surveyor, to draw a plan of the newly acquired property.

A Cemetery for All