William Christopher Macdonald is a rich man. He has made a fortune manufacturing chewing and pipe tobacco in Montreal.  In his later years he is a major benefactor to educational reform in Canada. 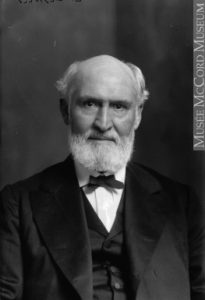 “He was one of those willing to plant trees under whose shade he would never sit”. R. W. Pound, Chancellor, McGill University

In 1899 Macdonald begins working with the renowned educator James Wilson Robertson. One of their projects is the Macdonald Rural School Fund. It’s a plan to improve educational opportunities in Canada’s rural communities. Through his research, Robertson has come to believe that large central schools would provide better, more standardized education to rural youth. There is resistance to this change. The costs will be too high. The loss of the local schools will have a negative impact on small communities. There was another important concern: how will the students get to this centrally located school?

To help overcome these obstacles, the Macdonald Rural School Fund will pay to build and equip model consolidated schools.  The fund will pay most of the operating costs, including teachers’ salaries for a period of three years. It will also pay to transport students from outlying districts to and from the school. After three years, if the local ratepayers wish to maintain the school, Macdonald will turn it over to them at no cost. The goal is to build one model school in each of Canada’s five eastern provinces. 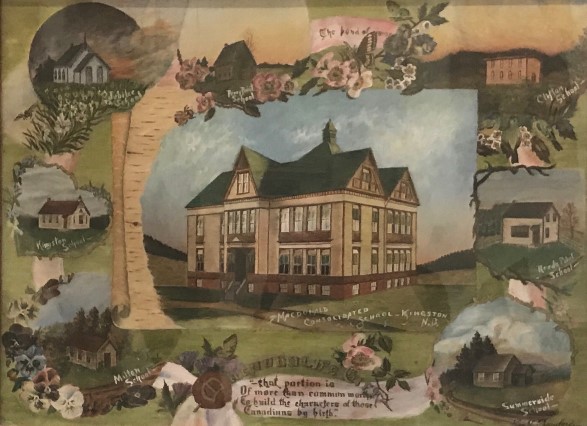 Painting by George Crawford of MCS and the seven one room schools that consolidated.

With the encouragement of School Inspector and Kingston native W.S. Carter, and the support of Superintendent of Education J.R. Inch, Kingston is chosen as the location for New Brunswick’s Macdonald Consolidated School (MCS). In 1904, students from seven, more accurately six and a half, district schools are brought together into one large state-of-the-art school. Only some of the students from the Perry Point school join those from the Kingston Village, Clifton, Summerside (Shampers Bluff), Reeds Point, Milton, and Jubilee (Hammond River) schools in the move to MCS.

They will receive a new kind of education. The seven district schools are next.

Kingston circa 1900 The seven school districts