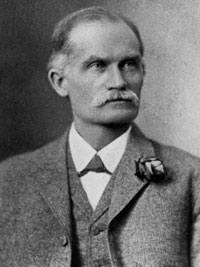 James W. Robertson (1857-1930) came to Canada at 17 from Scotland. Six years later, he bought his first cheese factory. At the age of 29, he was Professor of Dairying at the Ontario Agricultural College (OAC). In 1895 Robertson became Canada’s first Agriculture and Dairy Commissioner.

Macdonald and Robertson first collaborated on a program of Manual Training in urban schools. In 1903, local authorities took over the program in 45 schools from Truro N.S. to Victoria B.C. .

Their next project together was the Macdonald Seed Competition for rural youth. The most famous result of the competition was Red Fife wheat.

In 1902, 17 U.S. states had “consolidated” schools. Canada had none. Macdonald paid Robertson to study this new development. The financial and educational efficacy discovered inspired the Macdonald Rural School Fund.

The two men worked together on educational reform for ten years. The most lasting monument to their collaboration is McGill University’s Macdonald Agricultural College in Quebec.