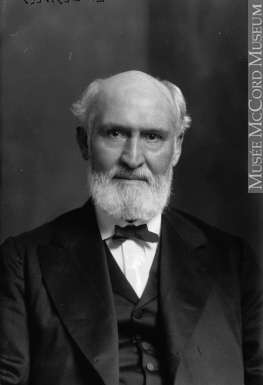 W.C.M. left PEI at 17 with very little money, determined to make his name as good as “gold wherever it may go”. Over the next 5 or 6 years he worked in Nova Scotia, Newfoundland, Quebec City, Boston, New York, and Montreal. Working as a bookkeeper gave him a detailed knowledge of business. He developed lifelong habits of self-sufficiency and frugality. From this point on he saved or invested half of what he earned. By 1868 Macdonald was living on Sherbrooke St. in Montreal’s Golden Square Mile. At the time it was the financial epicenter of Canada.

Having made his fortune, W.C.M.spent much of it on the education of others. His projects ranged from advanced atomic research to improving schools in rural communities. Queen Victoria described Macdonald as the greatest benefactor to education in the British Empire. She would reward him with a knighthood in 1899.  When he accepted this honour he changed the spelling of his surname from “McDonald” to “Macdonald”.