Born in Lebanon in 1897, William Cook exiles himself as a teen in order to avoid his mandatory military service.  He spends some time in Venezuela, then in New York, before finally settling down in the Canadian province of Nova Scotia. An entrepreneur, he opens his first general store on Cape Breton Island, in the city of North Sydney.

When he acquires the Albert Charron factory in 1931, William Cook is the owner of several retail stores throughout the Maritimes. Upon Mrs. Cook’s suggestion, who had visited the Galeries Lafayette on a visit to Paris, her husband’s new business takes the name of Lafayette Shoe Manufacturing Company Limited. The men, women and children’s shoes crafted at the factory supply Cook’s shops in addition to finding their way into other retail outlets. 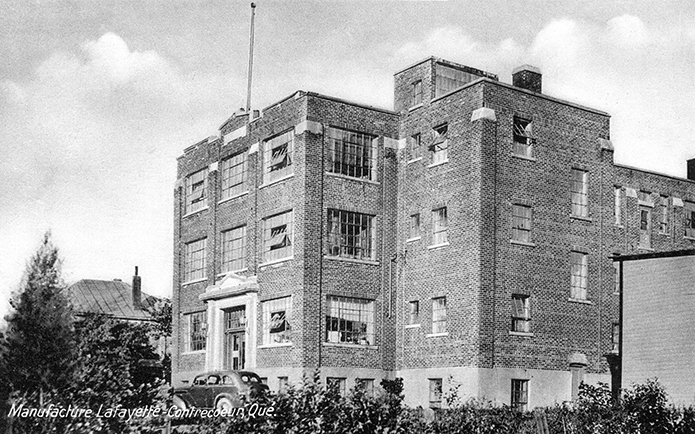 William Cook now resides in Québec and carves himself a place in the province’s shoe industry. Constantly on the lookout for innovations in the field, he establishes the General Footwear Company Limited in 1944, which merges with Lafayette Shoe. The Cook family lives in Contrecœur for a time before returning to Montréal while the children are still young.

William Cook and his sons

When he visits the factory, William Cook frequently brings his boys, William Jr. and Gordon, in order to initiate them to the business. In 1957, although still quite active within the company and loved by his employees, the time has for come for William Sr. to pass the torch to his two sons.

Marguerite Cormier knew William Cook Sr. quite well. She speaks of him with a great deal of admiration.

Mr. Cook (captions available in both FR and EN) – watch this video with the transcript (EN)

Let’s invite Marguerite Cormier to tell us about her work as a secretary.