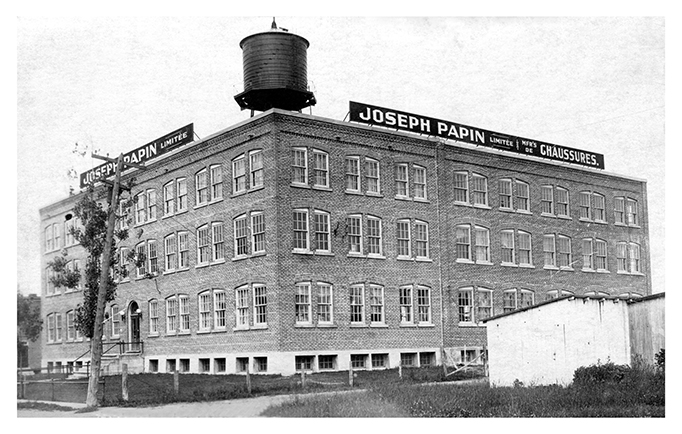 This factory mostly built leather shoes for young women, children and babies in accordance with two methods of assembly: McKay and Turn. In 1939, Papin crafts 1500 pairs of ladies’ shoes daily! The “McKay stitch”, also called the “Blake stitch” is a type of stitch used to assemble the shoe and whose name refers to the sewing machine used to make it.  The turn shoe, “chaussure tournée” in French, is crafted by flipping the leather upside down in order to sew the outside sole directly onto the upper part of the shoe.

Léopold Hamel, whose first job was at the Joseph Papin ltée Factory, explains the ingenious system that allowed the various machines to function in the following video. Afterward, he shares a trick that was put in place to help workers save time.

Under Joseph III’s able leadership, once he takes over from his father in the mid‑1920s, the company continues to prosper. It successfully navigates several troubled time periods, including the Great Depression, decreased production during the second World War and, later, low-cost foreign shoe imports. Known for his rigor and business sense, Joseph III remains at the helm of Joseph Papin ltée for over forty years, while his younger brother Léo leaves the family business to start his own shoe factory. Claire Papin, Léo’s daughter, explains what propelled her father to start his own company.

Joseph III passes away in 1971, at 84. His children, Guy, André, Thérèse, Lucette, Gilles and Pierre, manage the company’s succession plan. Over the course of several months, the factory seems to be increasingly idling.  Foreign market competition is impacting the Canadian shoe industry.  Joseph Papin Ltée, the company that led Contrecœur’s industrial development, ceases operating between 1972 and 1978. In 1986, this magnificent industrial building disappears forever. It is demolished in order to build Jardins fleuris homes, which welcomed their first tenants the same year. 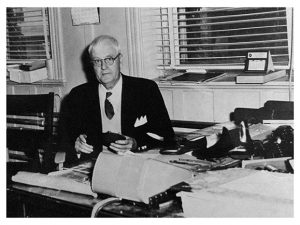 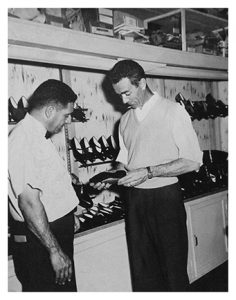 Guy Papin and a salesman

The pioneer: Joseph Papin I An unsuccessful first attempt for Léo Papin