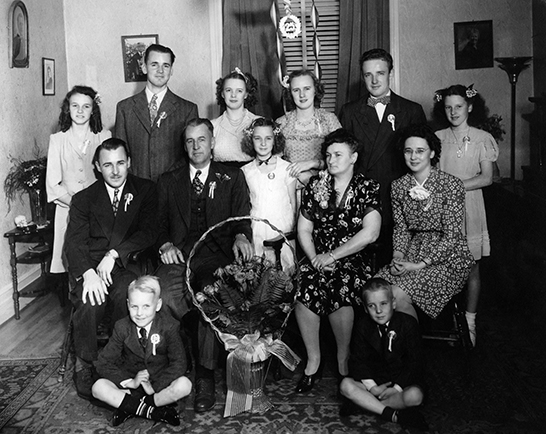 Photo of Léo Papin’s family around 1945

The war is over. Léo Papin, who sold Leo’s Shoe to Lucien Corbeil, decides to open a new shoe factory: Popular Shoe.  Specializing in children’s footwear, the factory settles in an old building on Bonin Street. This is 1946. The village holds three other shoe factories, each of them employing over 50 people: Joseph Papin Limitée, directed by his brother Joseph III, Lafayette Shoe Mfg. Co. Ltée which belongs to the Cook family and Big 4 Shoe Co. Ltée.

Léo Papin, then mayor of Contrecœur, dies accidentally on December 4, 1948.  His wife, a widow at 51, finds herself alone with eleven mouths to feed. As his daughter Claire mentions, it was a difficult period.

Léo and Alice’s three eldest children, all in their early twenties, roll up their sleeves and take over factory operations. Claire is in charge of administration, Maurice works sales and Édouard takes on labour and purchasing. As a wholesaler, Popular Shoe has several traveling salesmen who go door to door to sell their merchandise, but most of their product line is sold to retailers located in Ontario and Québec.  The client list includes Woolworth, Eaton, Simpson’s and the 5-10-15 retail chain.