Contrecœur as seen from the island

It is 1883 when Joseph Papin begins shoemaking in his home, located not far from the Chaput de Contrecœur mill.  For the town, whose main means of subsistence relied on agriculture, this event is a harbinger of change.  Around 1885, it is Pierre Giard’s turn to establish a shoe factory, followed in 1897 by Albert Charron.  Other small factories develop at the start of the 20th century, notably those of Exavériste Giard [1900-1904], Samuel Saint-Jean [1902-1904] and Gabriel Hurteau [1930-1937]. 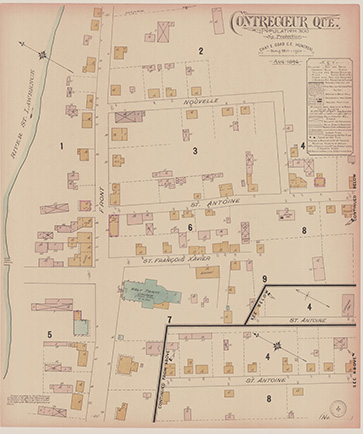 Already in 1901, the shoe factory has become the town’s main industry and production reaches approximately 2,500 pairs of shoes per week.  In the 20s, both Joseph Papin Ltée and Albert Charron’s factory expand, employing close to 250 people.  The same scenario is repeated throughout the country.  The majority of Québec factories are established in larger cities, especially in Montréal and Québec.  All by itself, our province yields at the time 60% of Canadian shoe production.