Jewish life in Saint John revolved around the Synagogue. Several organizations were formed to provide service to the synagogue and social opportunities for the community.

Immigrant aid work in Canada at the turn of the 20th century was often performed by women. Saint John was a major port of entry for immigration from Europe. The Daughters of Israel was founded by Alice Hart in 1899 “to help the needy and nourish the sick” and to assist immigrant families, especially with clothing for “distressed women and children arriving by steamer”. The work was funded by donations from the members and fundraising events. 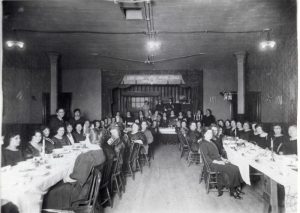 The organization affiliated with the Local Council of Women in 1908 and extended its efforts into improving life for the needy in Saint John. It also raised funds for relief agencies, including the Red Cross during the First and Second World Wars.

The Ladies Auxiliary of the Talmud Torah was founded in 1921. In 1939 the name was changed to Sisterhood Shaarei Zedek. Its purpose was to oversee the Hebrew and Sunday Schools. They held annual summer picnics for the children and provided holiday treats for the school children. They catered fundraising dinners, Bar Mitzvahs and other events in the Synagogue. Members also cared for the silver crowns and breastplates on the Torahs and other ritual objects.

The Sisterhood presented educational and dramatic programs including two short plays in 1952 and “Jewish Home Beautiful” in 1955. 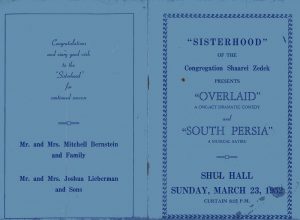 The success of plays presented by the Sisterhood led to the establishment of the Jewish Community Players in December 1952 under the direction of Dr. Moses Polowin. All of the actors and stage crew came from the Saint John Jewish community. They presented dramatic readings and stage plays to sold-out audiences in the vestry of the Shaarei Zedek Synagogue until 1961. 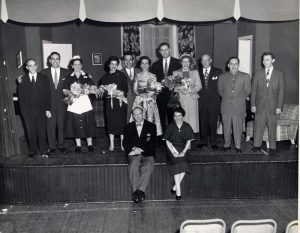 As a result of discrimination in the city, the Young Men’s Hebrew Association was formed in the 1920s. The members participated in gym classes, bowling, basketball and lectures. Many meetings were held in the Synagogue but a meeting hall was also acquired at 24 Horsfield Street. The annual ball held at the Admiral Beatty Hotel was a highlight. In 1927, the boys’ basketball team won the city championship. 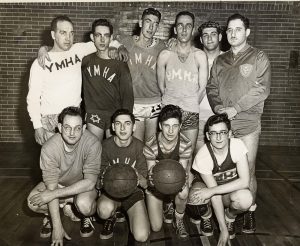 From the 1920s to the 1960s, there was strong participation in the Scouting movement with several groups of Scouts, Cubs, Girl Guides and Brownies. Leaders ensured that the children met regularly and participated in community events alongside other groups. They participated in the same activities as their non-Jewish counterparts – meetings, earning badges, camping in the summer. In 1937 some of the boys formed part of the honour guard for the royal visit of King George VI and Queen Elizabeth. The Brownies travelled to Fredericton in 1959 to see Queen Elizabeth II on a Royal Visit to Canada. 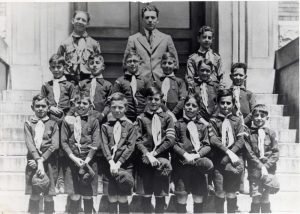 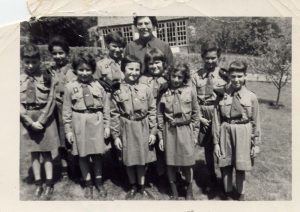 Rose Freedman established the Shomer Club in the 1970s to provide a monthly social activity for the senior members of the Saint John Jewish community. The members welcomed guest speakers, celebrated Jewish life and enjoyed outings.

All of these organizations have disappeared with the decline in the community.