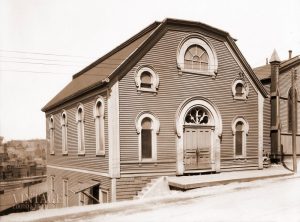 The first Rosh Hashanah services were held in 1879, but another twenty years would pass before the dedication of the Ahavith Achim (Brotherly Love) Synagogue in January 1899. Many non-Jewish residents of Saint John contributed generously toward the building of the first synagogue. This suggested that the English Jews were integrated into the city’s social life. Initially the congregation was drawn from the first wave of immigrants, but after 1906 most of the congregants were Eastern Europeans. After 1918, the building became known as the Talmud Torah and was used for meetings and Hebrew School classes. It was sold in 1951 and the building was destroyed by fire in 1985. 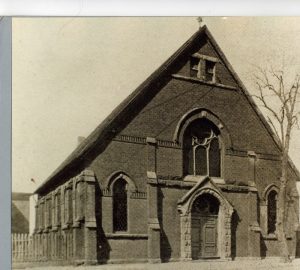 A second congregation, the Hazen Avenue Synagogue was established in 1906 when most of the assimilated and wealthy members of the community purchased a former Unitarian Church. This split in the community came in the wake of social and economic differences between the Western and Eastern European Jews. Most of the Jews from Eastern Europe remained at Ahavith Achim. Part of the elaborate Holy Ark constructed for this building survives to the present day. The building was sold to the local school board and demolished in the 1930s. 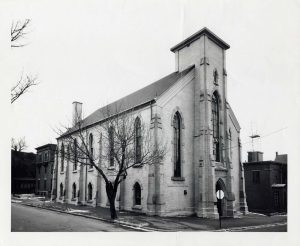 The Shaarei Zedek (Gates of Righteousness) Synagogue was created in 1918 when the two established congregations set aside their differences. They purchased the former Calvin Presbyterian Church which had been built in the 1860s. This High Victorian Gothic structure included a large sanctuary with a balcony. The balcony was reserved for female members until the early 1960s. Services were held for the Sabbath and Holy Days.

A large social hall was used for community dinners, fundraising events, basketball games and other activities. 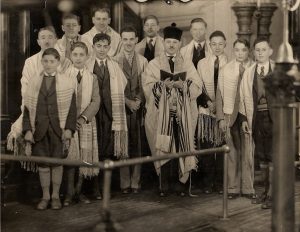 The shul was the centre of Jewish life in Saint John for ninety years. The years from the 1920s to the 1960s were referred to as “The Golden Years”. The children who came of age in the 1960s left Saint John for educational and employment opportunities in larger Canadian and American cities. After many years of declining Jewish population the building was sold in 2008. The remaining congregation moved to a smaller building.