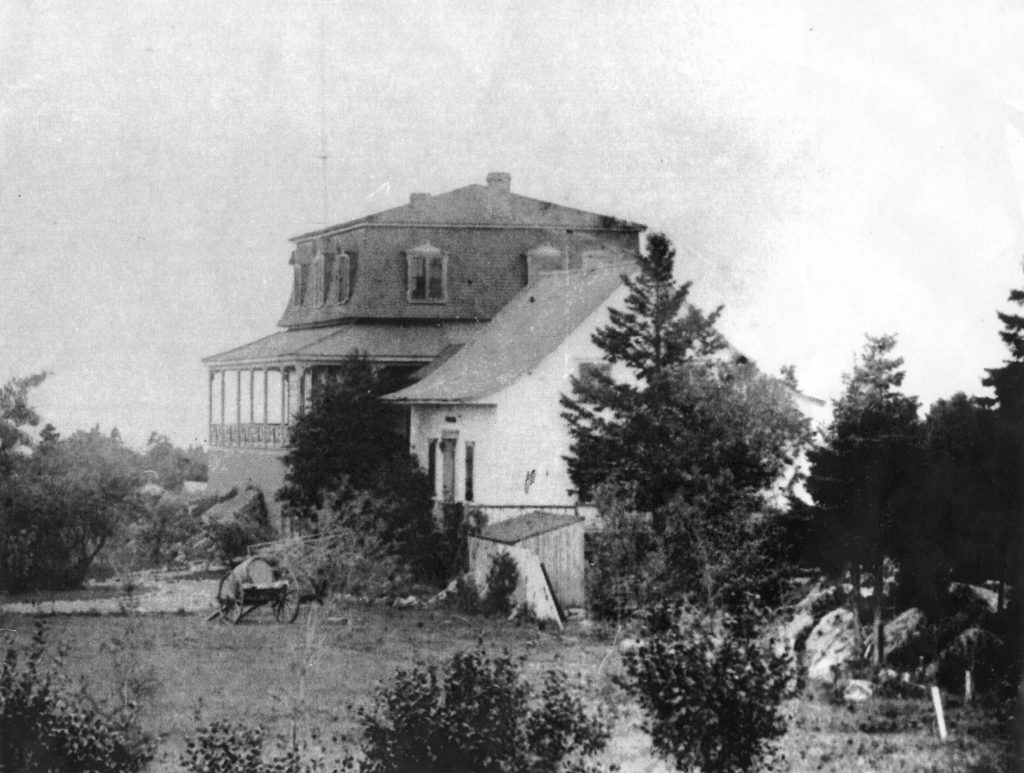 Les Rochers c. 1883, showing the new west-wing addition to be more imposing than the original building.

After ten years of paying summer rental fees for the small white farmhouse in this photo, in August of 1882 Lady Agnes Macdonald purchased the property from Benjamin Chouinard for $300.00.

The sale of the property in 1882 consisted of the farmhouse plus “five acres of rock”, as Lady Agnes would later describe it. In fact, the original sale included 3 acres; Lady Agnes Macdonald would later buy an adjoining lot from Madame Virginie Chouinard Bernier. 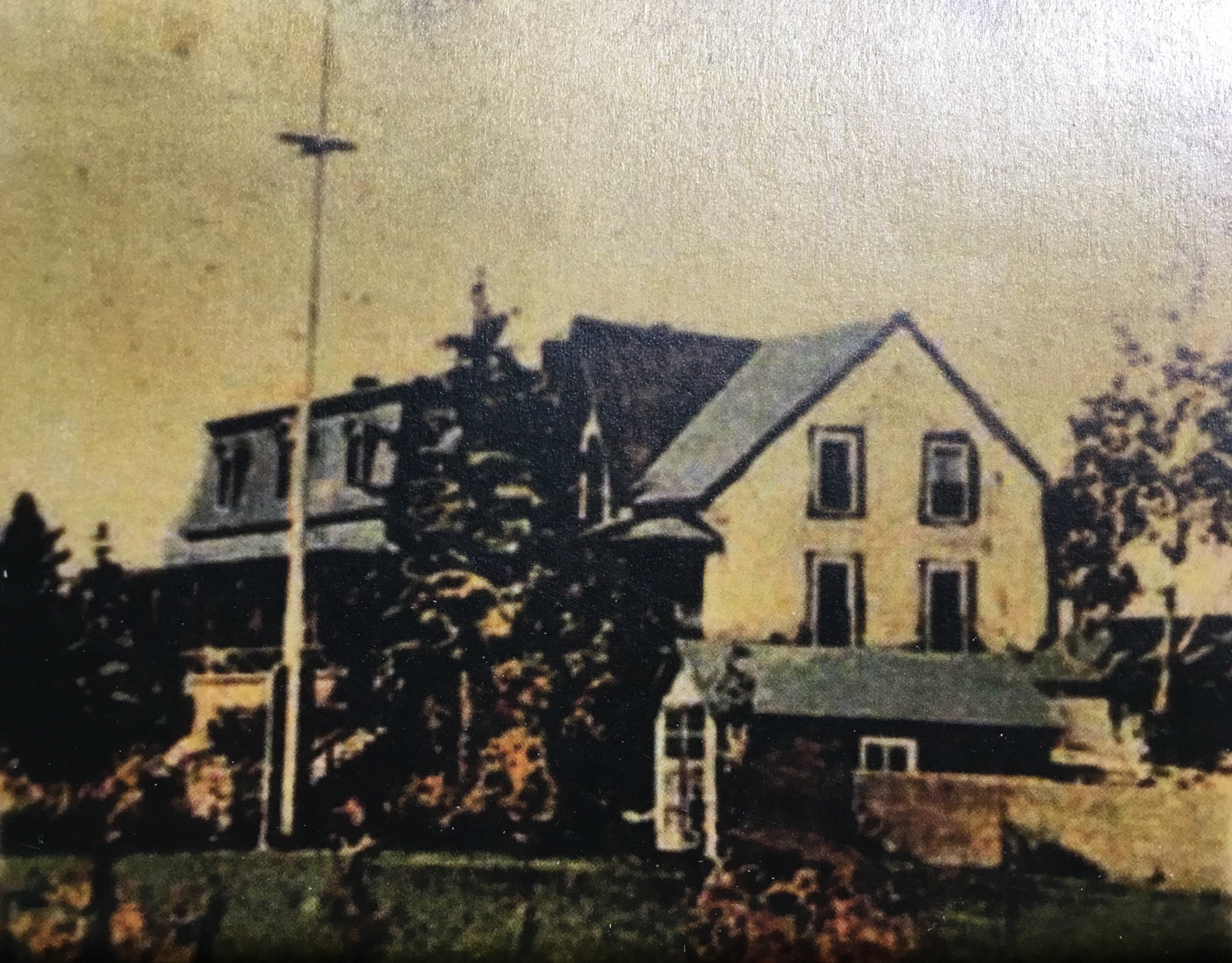 Local carpenters were engaged to carry out the work at Villa Les Rochers. Once the added wing was complete, the roof was raised on the original farmhouse to create a full second storey, and two windows and a dormer were added on the east and north sides.

Inside the larger addition, the doorways and passageways were wide enough to accommodate their daughter Mary Macdonald’s wheelchair.

The Macdonalds had a wooden gallery erected along the river-side of the addition, and another installed on the south side, facing the road. 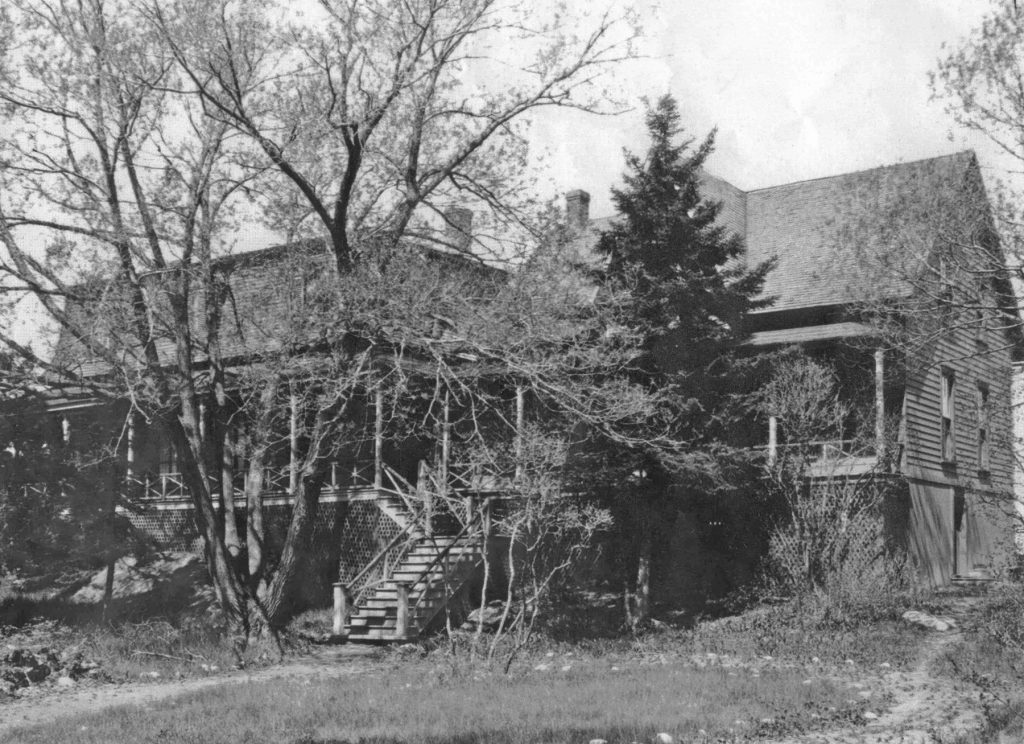 Villa Les Rochers in 1910, during the time it was owned by Lord Shaughnessy.

After the death of Sir John A. Macdonald in 1891, Lady Agnes and their daughter Mary Macdonald returned to Villa Les Rochers for one last season in the summer of 1892.

It remained empty for three years until she sold it for $2000.00 to Thomas Shaughnessy, then vice-president of the Canadian Pacific Railway.

Shaughnessy later had the gallery extended even further, all along the west side of the new wing, joining together the north and south galleries.

Just weeks after war in Europe broke out in 1914, Shaughnessy sold Villa Les Rochers to Dame Arthur Shorey. In 1928 it was sold again, to Edythe Evelyn Woods McCuaig, this time for $4000.00. An estate sale saw Villa Les Rochers pass into the hands of Fay (Christie) Symington in 1939. 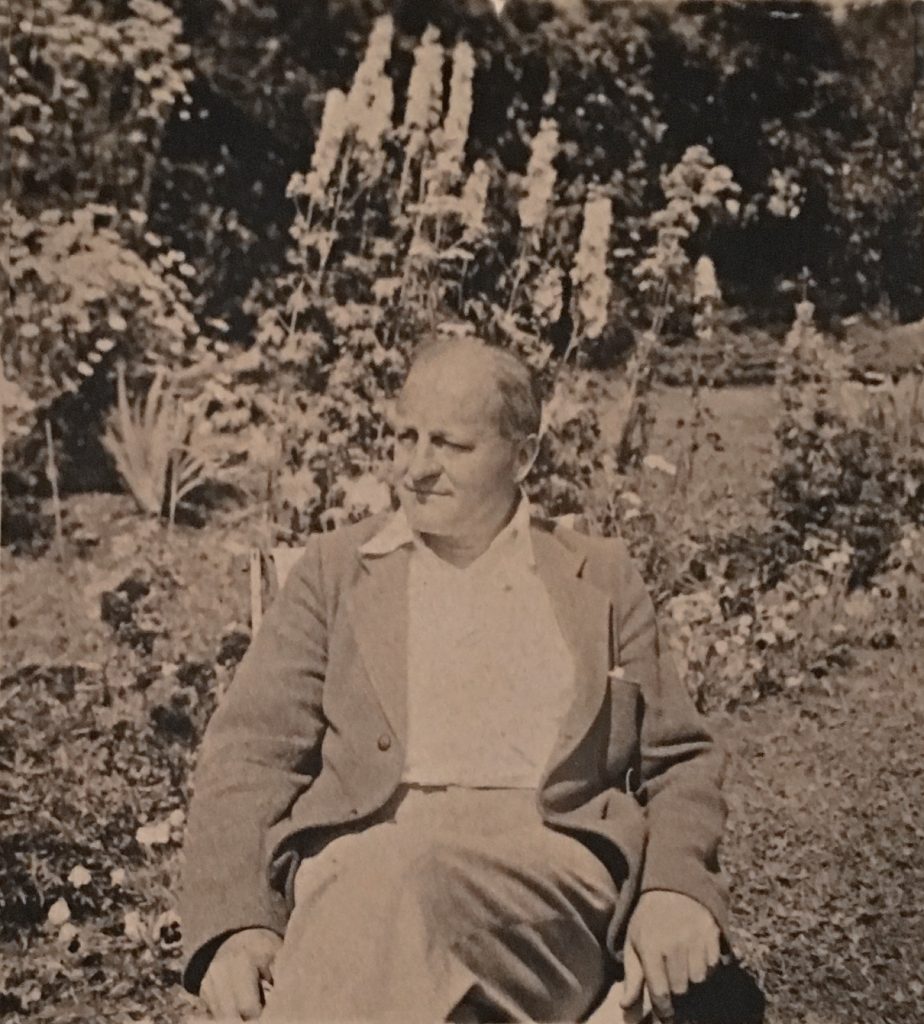 Herbert Symington, c. 1949, in the garden at Villa Les Rochers

Herbert James Symington, the husband of Fay (Christie) Symington,  was president of Trans Canada Airlines and a director of the Canadian Pacific Railway. Between 1939 and 1973 Herbert and Fay, their three children and later many grandchildren, spent summers at Villa Les Rochers.

The children played hide and seek, skipped ropes along the balcony, staged plays on the dining room sideboard and played croquet on the front lawn.

In 1967, to mark 100 years of Confederation, the Historic Sites and Monuments Board recognized Villa Les Rochers. That summer Prime Minister John Diefenbaker unveiled a plaque in front of the house, which reads “Sir John A. Macdonald, the first Prime Minister of Canada spent many summers here between 1873 and 1890”.

Villa Les Rochers was inherited by Herbert and Fay Symington’s daughter Margaret Helen Symington Eakin, who enjoyed it for many years and later donated the house and transferred ownership to the Canadian Heritage of Quebec (CHQ). 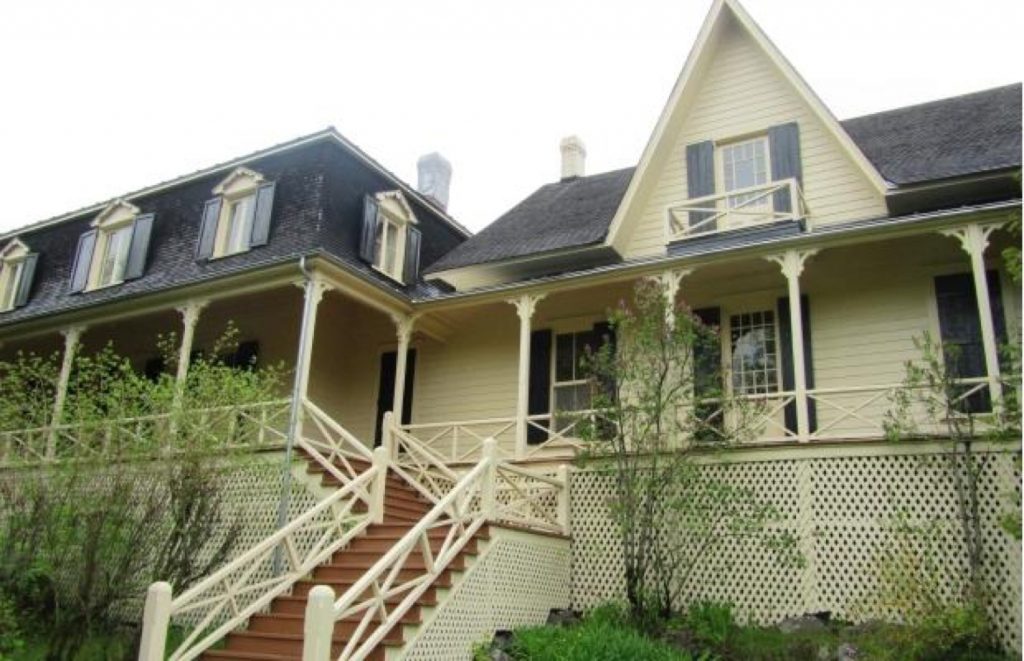 The Canadian Heritage of Quebec has been the custodian of Villa Les Rochers since 1981 and takes care of its preservation and management with the help of the local community. Since 1996 it has been operating as a seasonal Bed & Breakfast, welcoming people from all over the world.

On December 4th, 2014, at the request of the Canadian Heritage of Quebec, the Sites and Monuments Commission of Canada officially designated Villa Les Rochers, summer residence of Sir John A. Macdonald, a national historic site. On June 30, 2017, 50 years after the recognition of Prime Minister John Diefenbaker, another commemorative plaque was officially unveiled at Villa Les Rochers by representatives from Parks Canada by the Honorable Catherine McKenna, Minister of the Environment and Climate Change and minister responsible for Parks Canada.

The Canadian Heritage of Quebec is a provincial, non-profit, non-governmental foundation that since 1960 has been dedicated to the conservation of heritage buildings and sites of historical interest or natural beauty in Quebec. 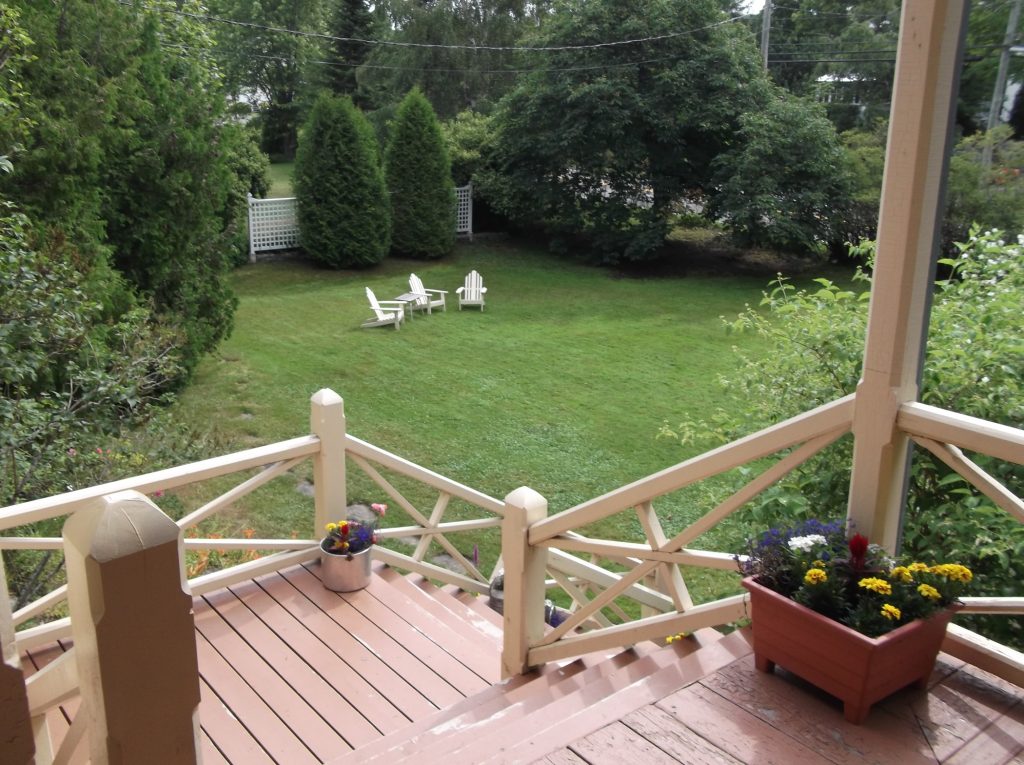 The Canadian Heritage of Quebec’s activities are financed through donations from friends as well as public and private foundations which are also involved in the heritage fields. Rental and entrance fees to some of its properties allow the organization to generate annual revenues. To find out more about CHQ, visit the “Additional Resources” page of this exhibition where you will find its website link.

One of Sir John A. Macdonald’s Legacies: the Canadian Pacific Railway Furniture and Artefacts at Villa Les Rochers