Long before Europeans visited or settled on the south shores of Quebec’s Saint Lawrence River, the indigenous peoples – including the Mohawks, Montagnais, Abénaquis, Mi’kmaq and Malécites people –  travelled over these lands and rivers to hunt, fish, gather and trade between each other. 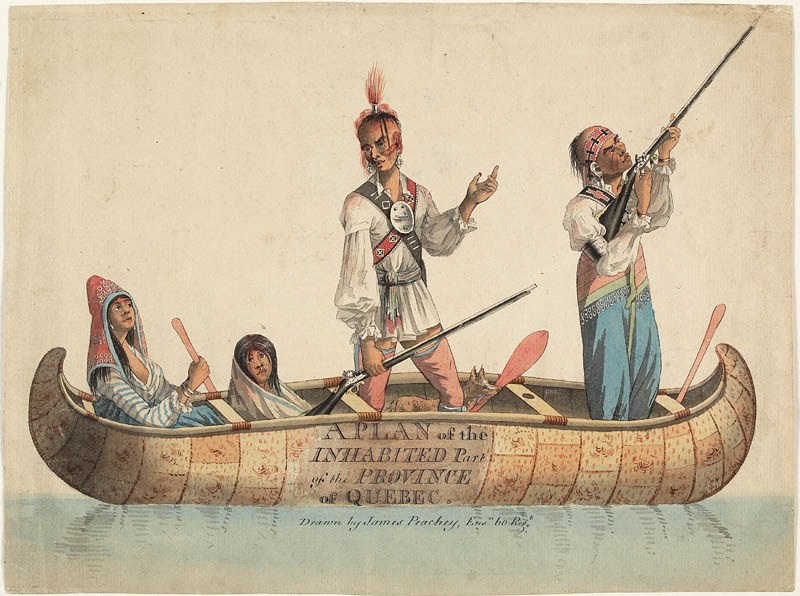 After the arrival of European explorers, trading posts began to be established on the north and south shores. Fur-laden canoes were portaged from Lake Temiscouata down to the Saint Lawrence and paddled across the river as far as Tadoussac to exchange for guns and ammunition.

In the early 17th Century Récollet priests and Jesuit missionaries came to Rivière-du-Loup with the intention of converting the indigenous people to Christianity. The indigenous people helped them survive through the winters, and taught them how to construct weirs to trap eels. 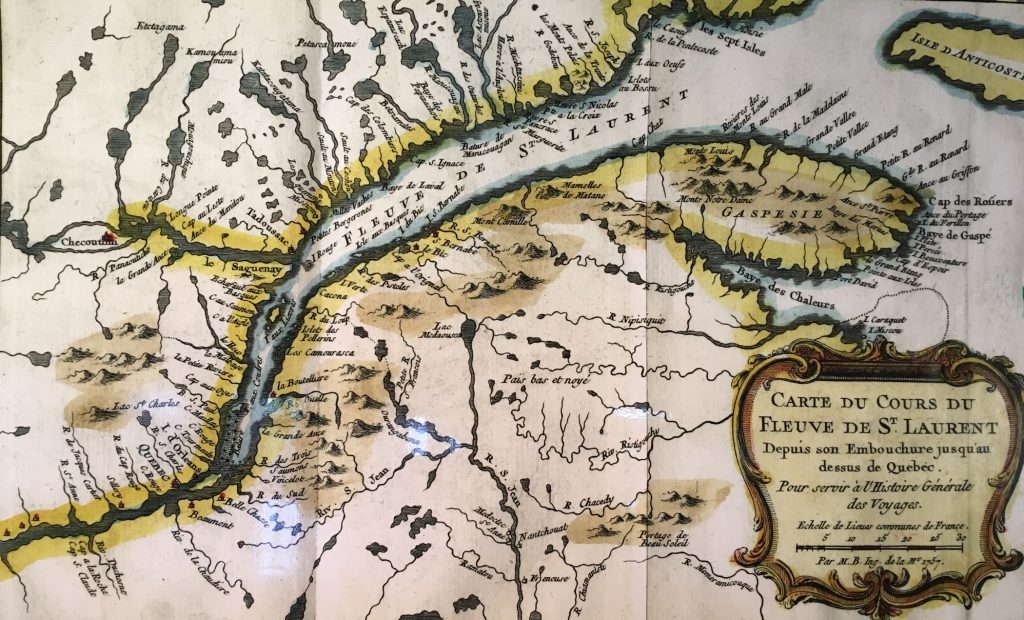 Many former French soldiers were given tracts of land along the shores of the Saint Lawrence. Trees were felled, homes and stables constructed, and cleared fields were sown with corn and grain. A mill and a bakery followed. 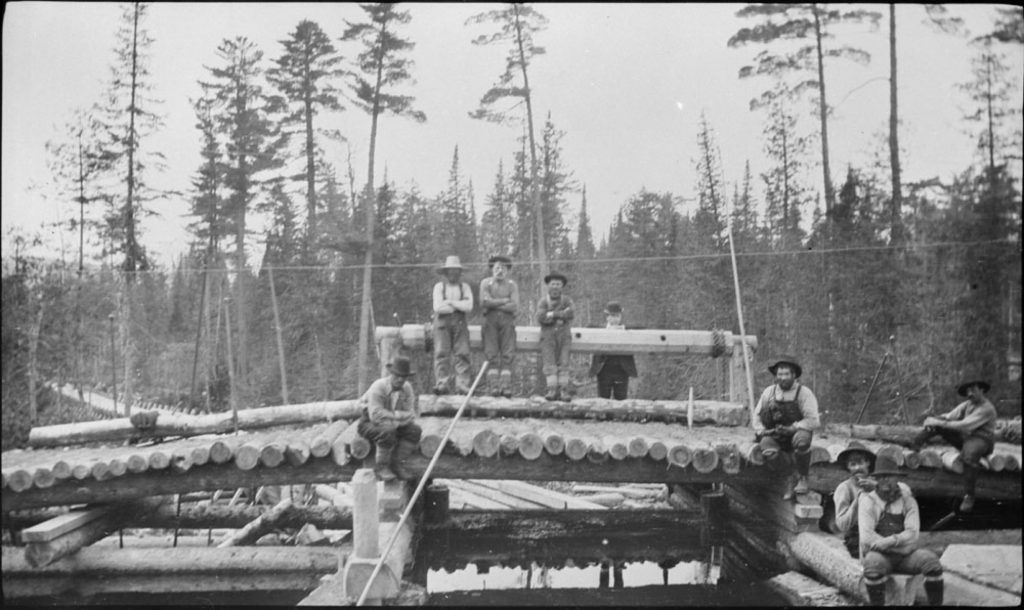 Lumbermen around a timber slide, undated

One of the first permanent settlers, or “habitants” in this south-shore community was Michel Viel from Brittany, who bought his farm in 1750 from the Seigneur Joseph Blondeau for “un capot”, a greatcoat.

The Viel family was soon joined by the Chouinards, who had come originally from central France and who had settled first at Saint-Jean-Port-Joli. They too started farming, growing vegetables and raising cows, pigs and sheep. Later the Chouinards would open the community’s first boarding-house, “La Pension Chouinard”.

When Scottish-born Governor James Murray (first governor of the province of Quebec) took over colonial administration of the seigneury, his Catholicism and his facility with the French language were assets. He defended the French farmers, whom he held in high esteem, against the anglophone tradespeople. Many of the Scottish settlers married French Canadians and had families.

In the early 19th century, the first summer visitors began to holiday along the Saint Lawrence’s lower south shore in villages including Kamouraska and Cacouna. A daily steamboat service was established and a fresh custom for affluent Canadians was born. 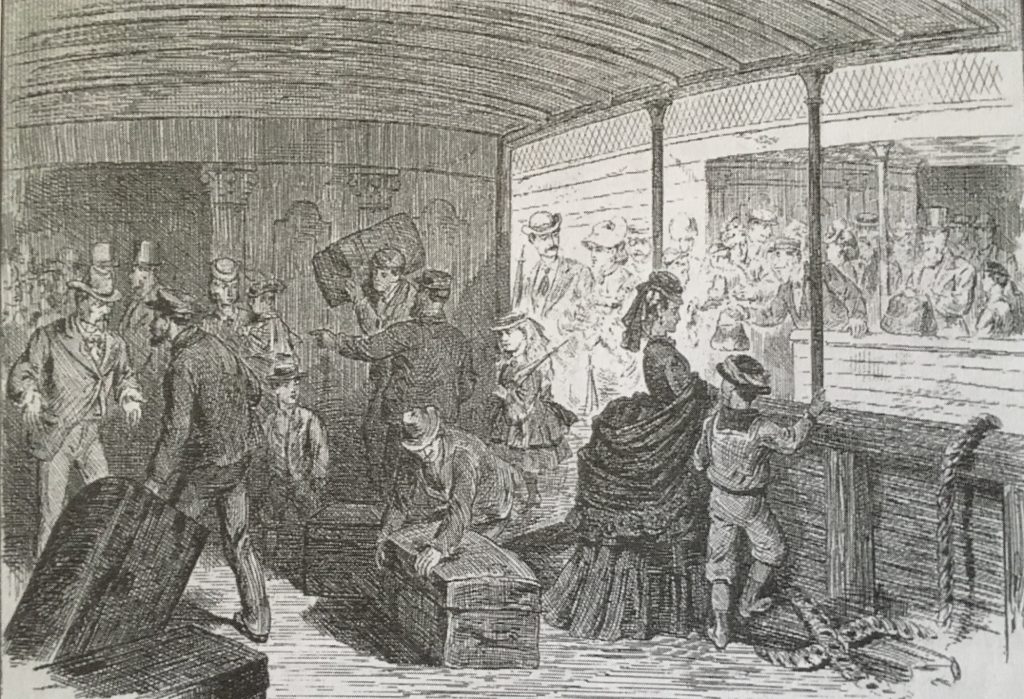 “Une promenade à l’eau salée”, travellers changing from one steamboat to another at Quebec City, etching by E. Jump, 1872.

By mid-century, a small stretch of natural shoreline west of Rivière-du-Loup had begun to attract a particular group of elite clientele who included governors general, industrialists, businessmen, and Canada’s first Prime Minister, Sir John A. Macdonald. This community was called the Parish of St. Patrick.

In the following documentary called “The lure of the lower St. Lawrence: home of Villa Les Rochers”, highlighting Sir John A. Macdonald’s summer home in the context of its geographical place and time, both archival and modern-day images are featured, as well as the memories and expertise of Gael Eakin, Desmond Morton, Jeannine Ouellet, and Alexander Reford.

The Lure of the Lower St. Lawrence: Villa Les Rochers View this video with transcript

A History of Summer Residents in St. Patrick