Sir John A. Macdonald’s own words on Canada’s confederation were very eloquent and impassioned, as one can hear when playing this video.

Sir John A. Macdonald speaks about Canada’s Constitution View this video with transcript

In London, England, on June 29th, 1867, John A. Macdonald was knighted by Queen Victoria in recognition for his exceptional contribution in bringing about Confederation of British North America. 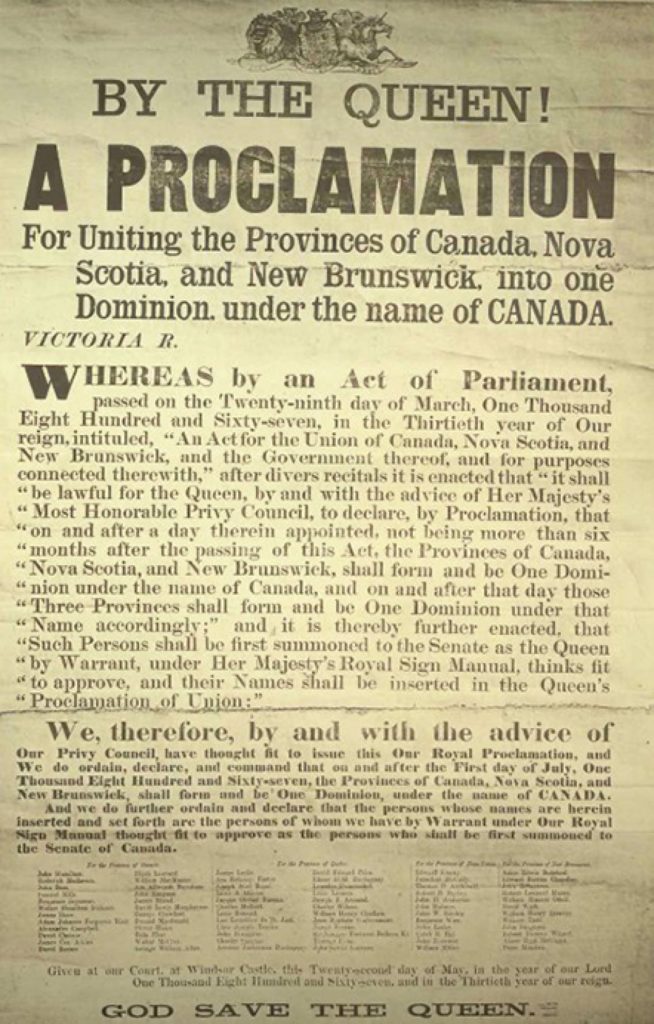 Queen Victoria’s words proclaiming the Dominion of Canada were published in newspapers for July 1, 1867

Thereafter, the term “Fathers of Confederation” referred to the 36 people who attended one or more of the three conferences held to discuss uniting Canada’s provinces and former colonies.

Sir John A. Macdonald was appointed Prime Minister by the Queen’s representative Lord Monck; in keeping with the constitutional requirements, a general election (the first federal election for the new country) was held one month later, which Macdonald easily won. 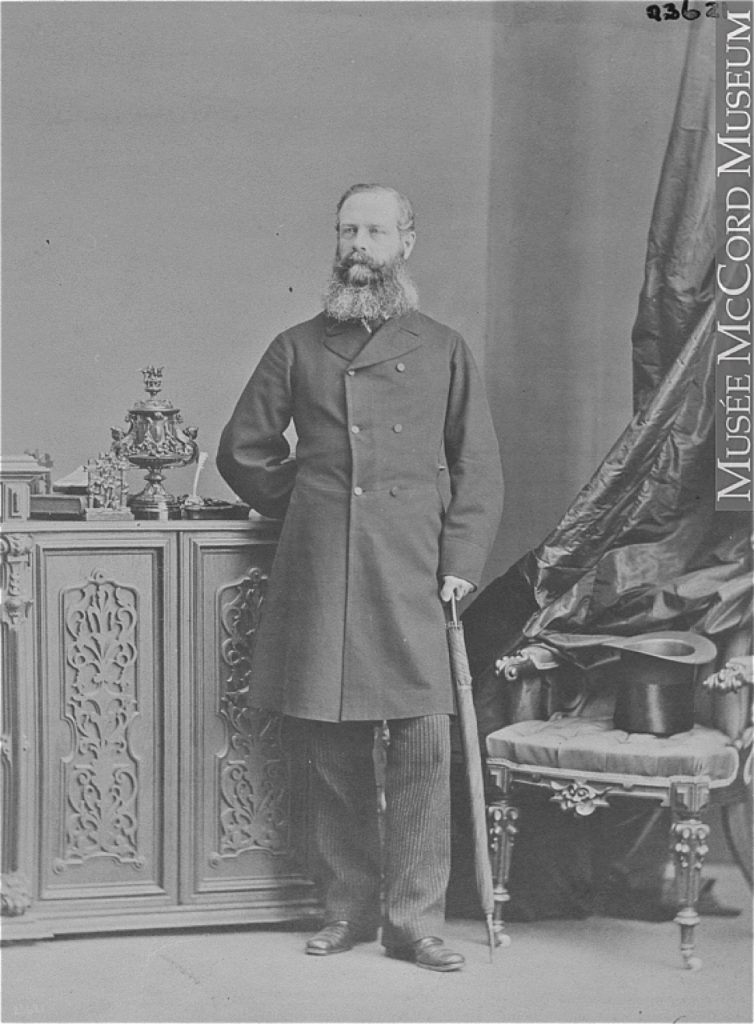 Governor General Lord Charles Monck and Lady Frances Monck enjoyed spending their Canadian summers in St. Patrick where, during the 1860s, they rented a farmhouse at 308 rue Fraser, which belonged to the local blacksmith, Alexandre Moreau. 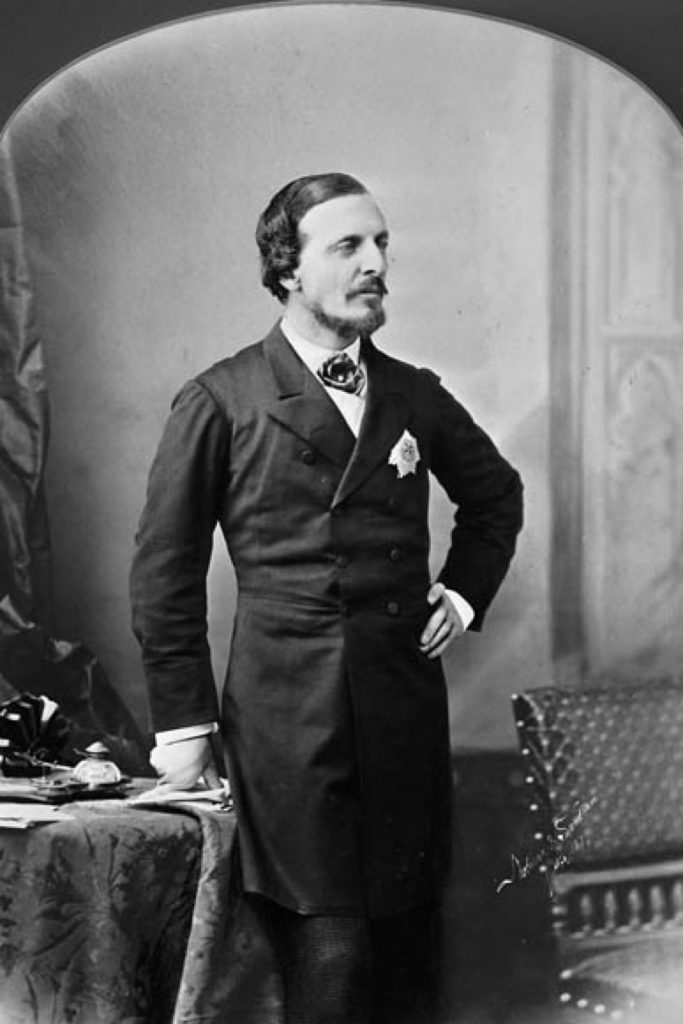 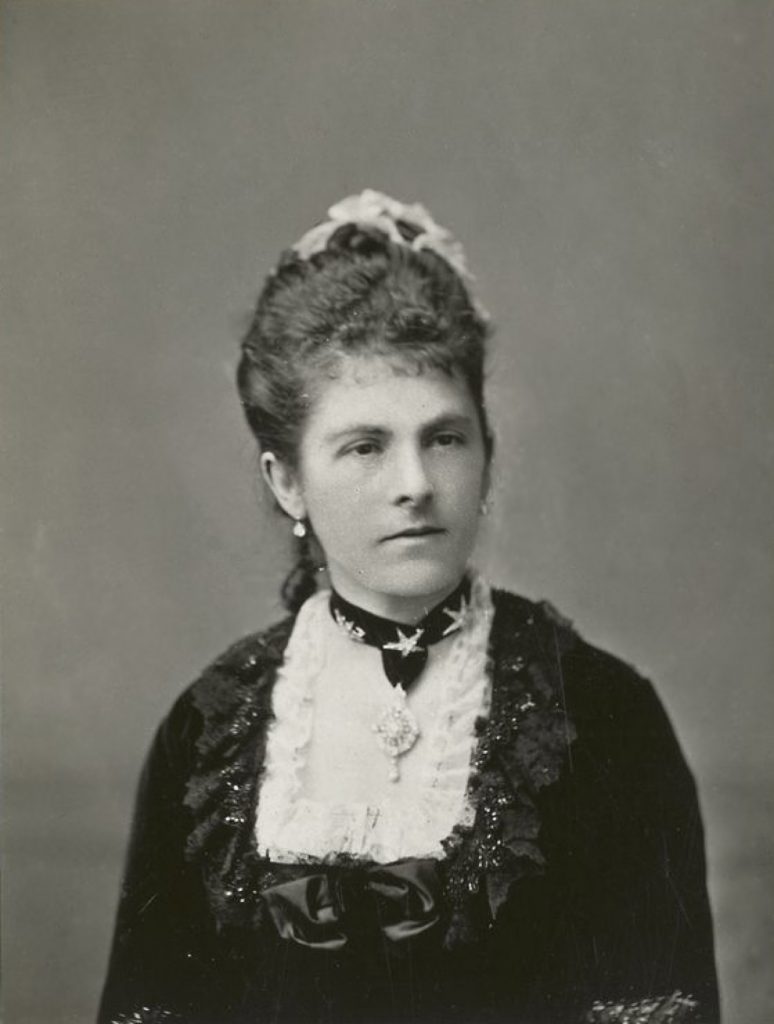 This was before Lord Dufferin and Lady Dufferin (Hariot Hamilton-Temple-Blackwood) had a permanent house of their own, Dufferin House, built in Tadoussac on the north side of the Saint Lawrence River. 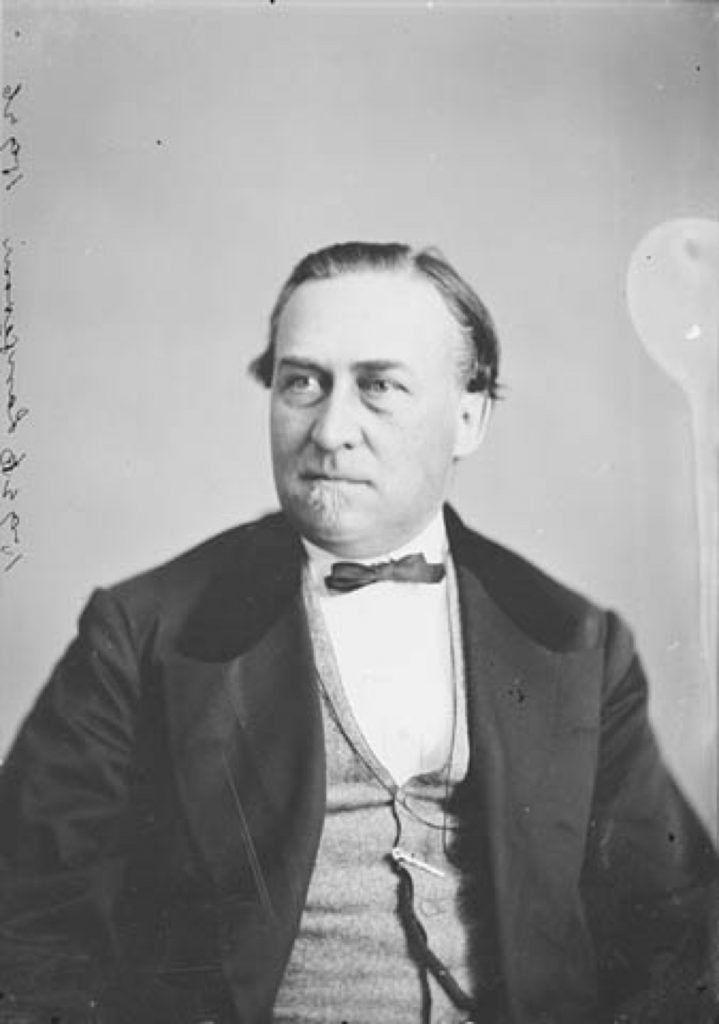 Sir Hector-Louis Langevin, considered also one of the Fathers of Confederation, and who held a position in the cabinet of Prime Minister Sir John A. Macdonald as Minister of Public Works between 1869 and 1873, is known to have stayed in St. Patrick. 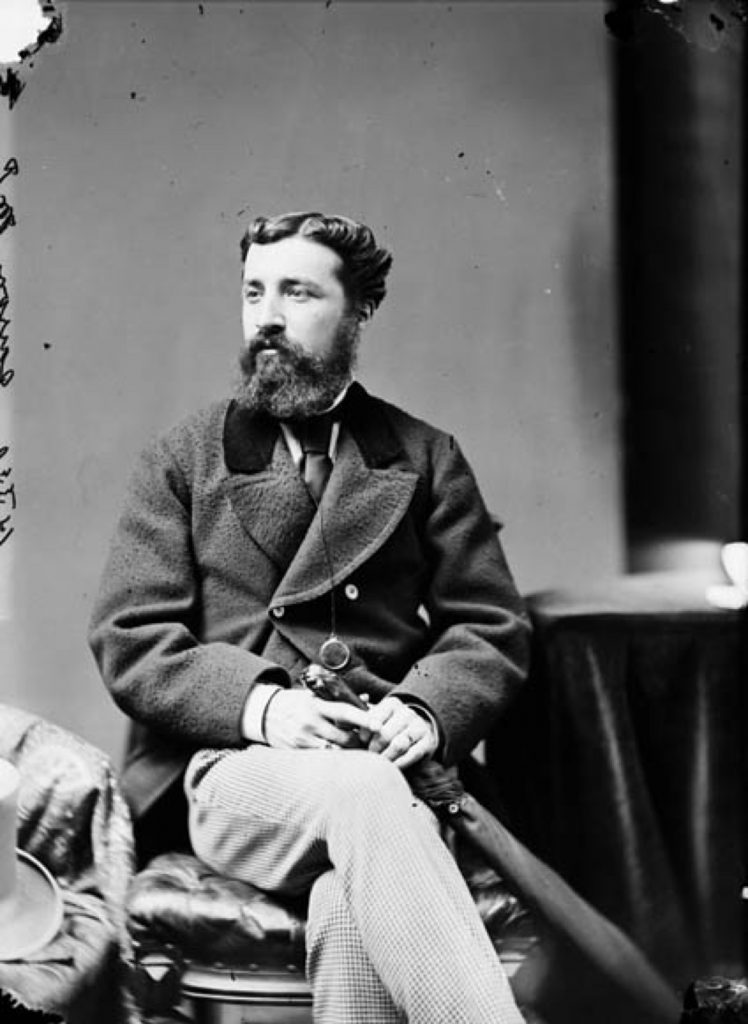 Joseph-Philippe-René-Adolphe Caron, Macdonald’s Minister of Militia was another summer resident, who first rented and later purchased a house about a mile from Les Rochers.

One summer Caron, who was known as a “dandy” and who loved to ride horses, hosted a memorable and lavish political picnic in the fields behind his house in support of Sir John A. Macdonald. 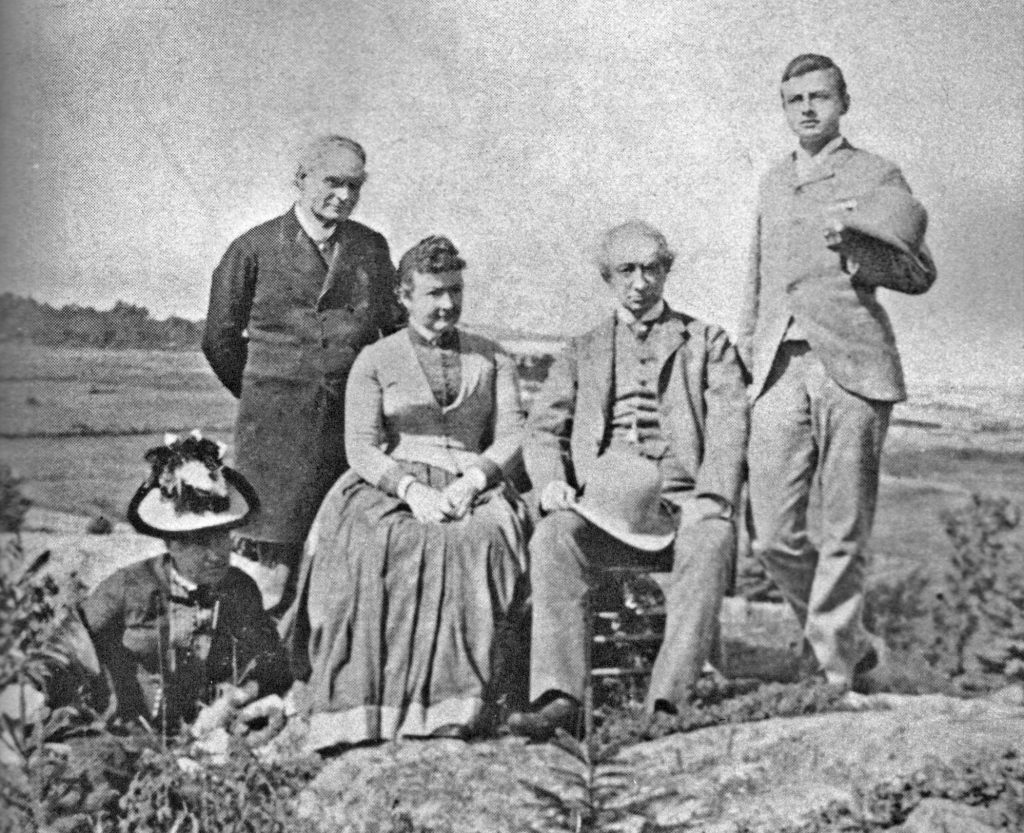 Sir Samuel Leonard Tilley, lieutenant-governor of New Brunswick and another Father of Confederation, and his wife, for decades close to the Macdonalds, are known to have stayed with Sir John and his family at Villa Les Rochers on more than one occasion.

Thomas McGreevy, banker, politician and businessman, and a Father of Confederation as well, kept a summer house in St. Patrick. He was known to be both ruthless and extremely shy, and his presence as a politician is described by the Dictionary of National Biography as “l’éminence grise”, or quiet mastermind.

In the summer of 1882, when the Macdonalds were having extensive renovations carried out at Villa Les Rochers, they rented McGreevy’s house for the duration. McGreevy himself was unable to be in St. Patrick that year, for he was occupied with business in Quebec City.

During the last week of August 1885, with pressing financial and political problems threatening progress of the railroad, Sir John A. convened his Cabinet to meet at Les Rochers.

Some, such as Joseph-Philippe-René-Adolphe Caron and Sir Hector-Louis Langevin, did not have to go far, as they were already spending their summer in St. Patrick. Other Cabinet Ministers including Alexander Campbell (Minister of Justice), Thomas White (Minister of the Interior) and John Costigan (Minister of Inland Revenue) travelled by train from Ottawa. 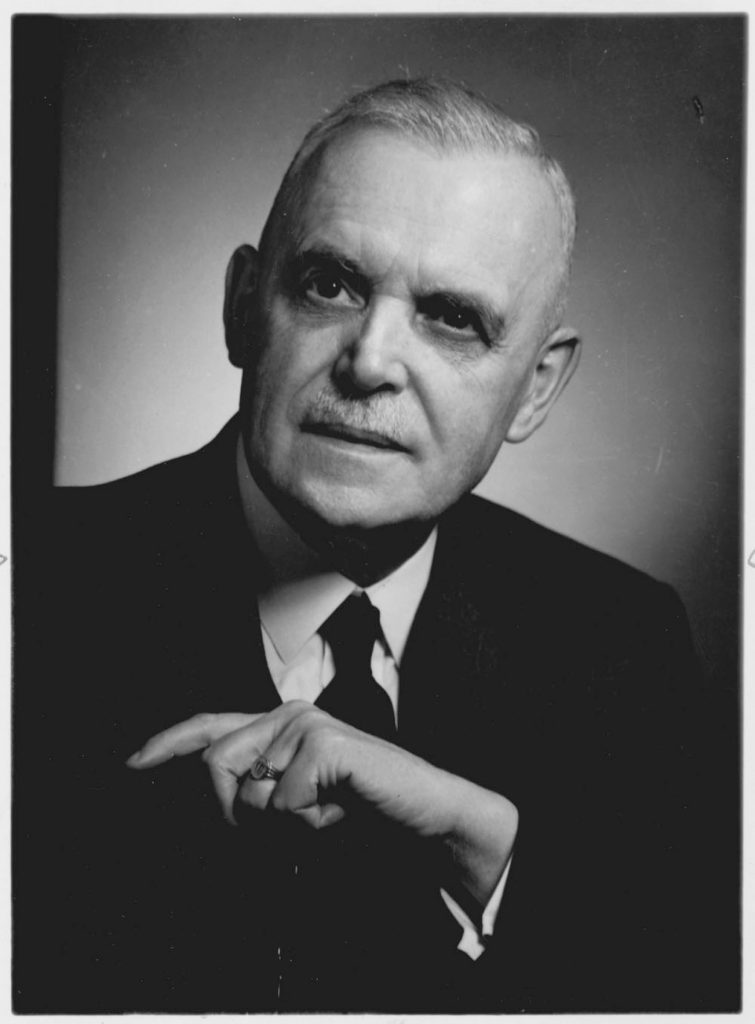 In 1955 Prime Minister Louis St.-Laurent purchased a brick house (built by Pierre Pelletier in 1865, and later extensively renovated by owner James K. Woods) at 342 rue Fraser. He and his family spent their summers there until 1971.

A History of Summer Residents in St. Patrick Circumstances that Brought the Macdonald Family to St. Patrick